Hotei Japanese Premium, Inc. held two nights of whiskey pairing events at Cafe Ysabel, San Juan City, in celebration of its first successful year as an importer of Japanese products in the country.

On a night of free-flowing whiskey, the invited guests enjoyed five courses paired with five Akashi Whiskey products and a special surprise towards the end. 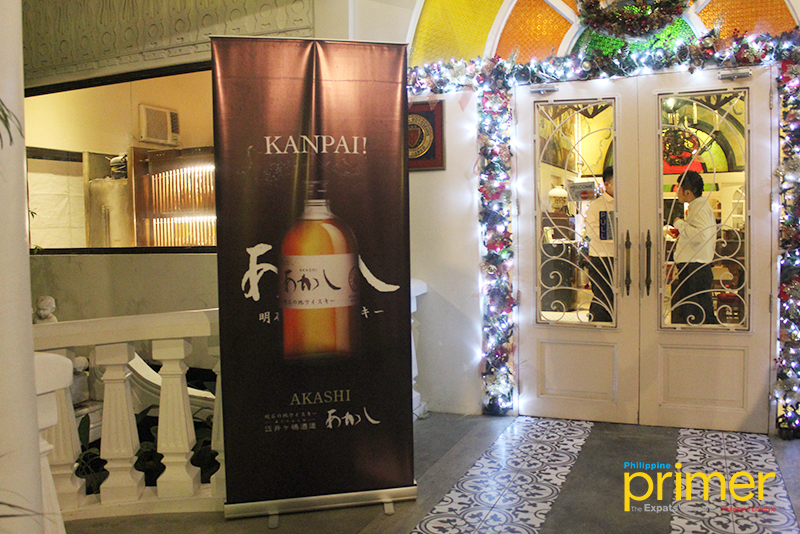 We were first introduced to Akashi whiskey, which is the only whiskey in the world that is produced by a “Toji”, or an expert in the art of sake making. Eigashima Akashi is the definition of a small distillery with only two months each year dedicated to whiskey making.

The bottles are hard to find even in the local Japanese market. 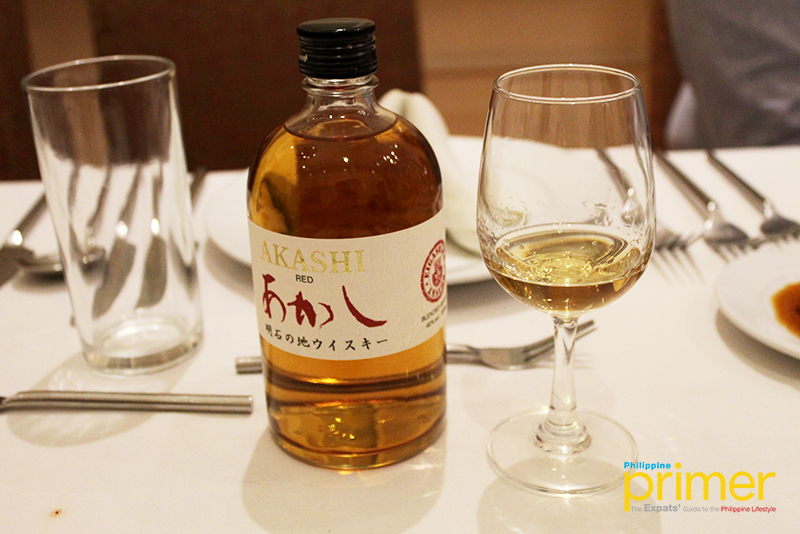 The Akashi Red has tasting notes of powerful, oily, spices with vanilla

The night started with an amuse-bouche and a Sopa Ysabel En Croute paired with Akashi Red Blended Whiskey. The light blend created from both malt and grain whiskeys worked wonders on the saffron seafood soup, as if giving it more kick of spice. It was a great start to an adventurous dinner. 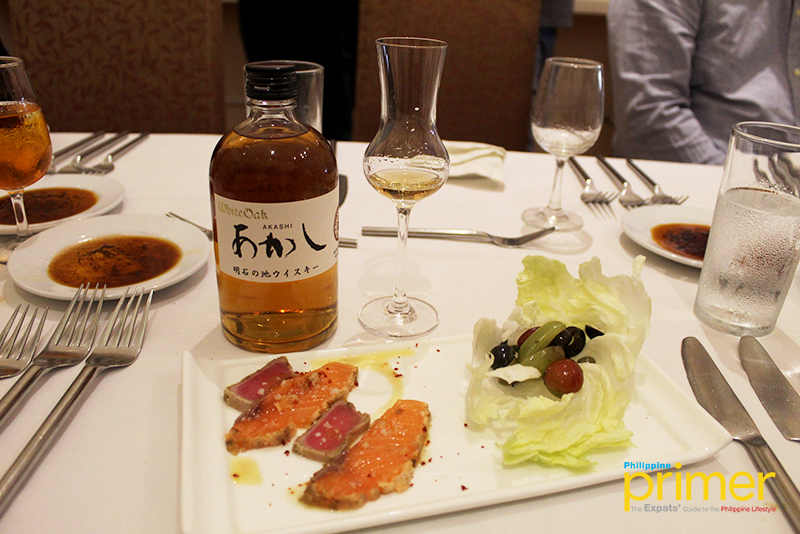 The White Oak Akashi Blended is a 40% alcohol, hinting notes of sweetness with dried apricot and a touch of oatcake

Next, we were served Tuna and Salmon Tataki, Grape and Olive Compote Salad with White Oak Akashi Blended. The salty tataki and the sweet compote played well with the grain notes of the whiskey. The bread-like flavor of the whiskey was almost like a refresher on the lightly seared cuts of tuna and salmon. 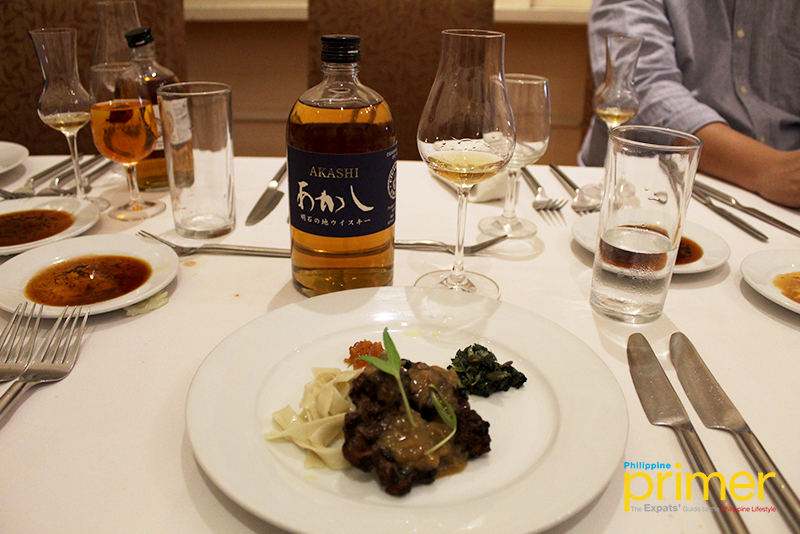 The Akashi Blue is reserved in Japanese Shochu cask (American  Oak) for two years, aged in a bourbon cask before finishing in sherry casks for a year

The Akashi Blue Blended Whiskey was paired with the Grilled Quail Marinated in Sweet Wood Spices, which was served with the roasted onion soubise Sautées Spinach with Squash Seeds. The first peat whiskey of the night was actually slightly sweet and woody that complemented the marinated quail to a point. 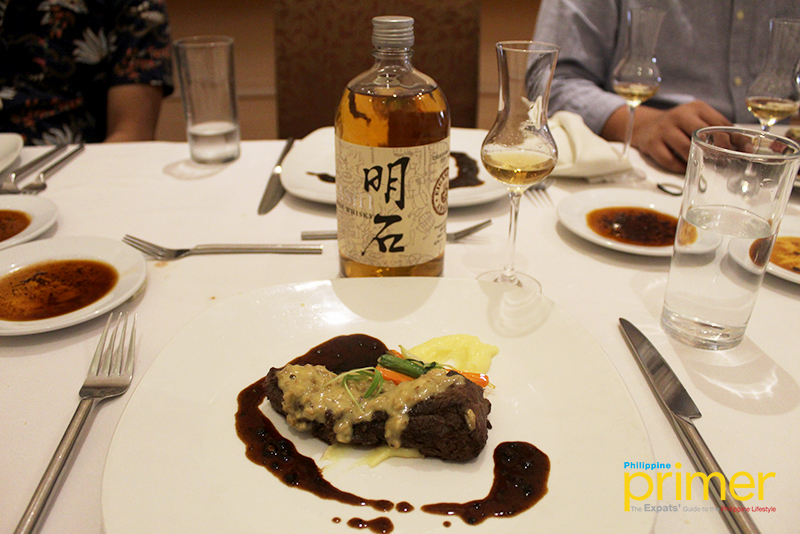 Best enjoyed with red meat, the Akashi Toji is aged for five years with a lasting finish of honey, spices, cinnamon

A Toji, as we’ve mentioned, refers to a master in the art of sake making, but the producer of Akashi Whiskeys Eigashima Shuzo Ltd. employs their skills to create a rare blend of whiskey. With the Argentine Entrana Steak, the Akashi “Toji” spoke with fruity and spicy notes. 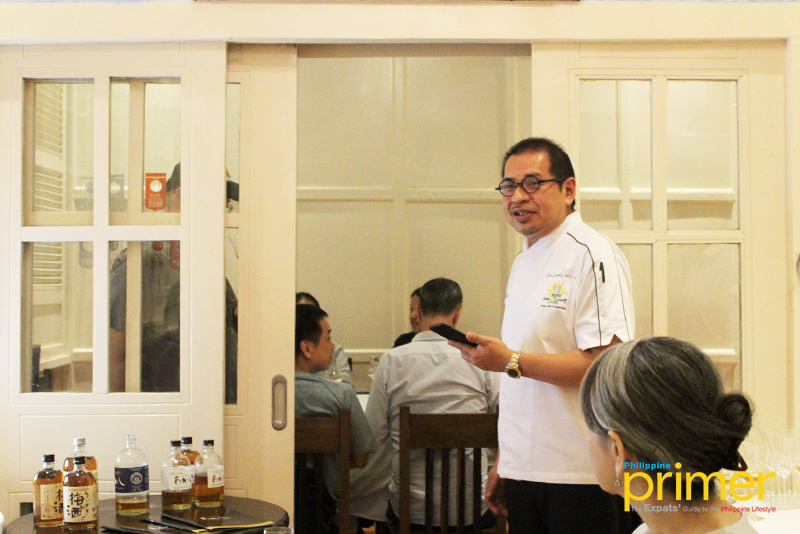 Chef Gene Gonzales of Café Ysabel explained each course, including his notes on the distinct flavors of each Akashi whiskeys

The creation of the Akashi Toji is said to be the interpretation of a sake master on how whiskey should taste, thus giving it its unique flavor and is sought around the world. 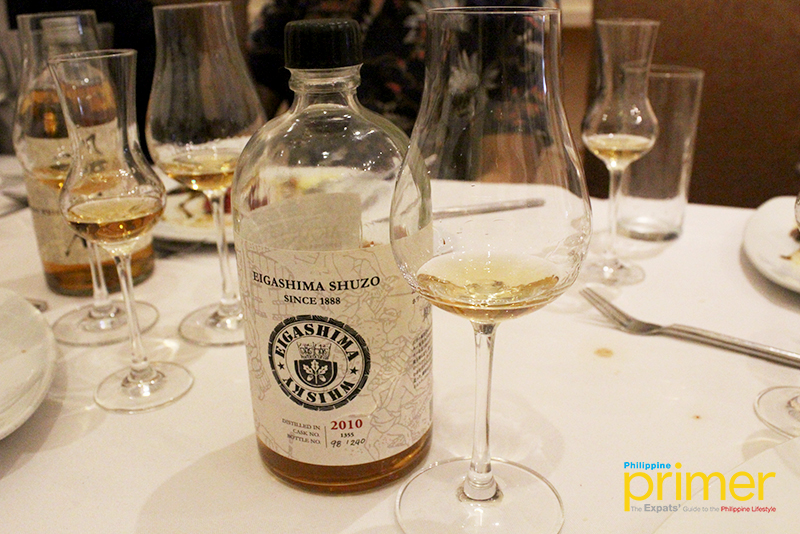 With a strong alcohol content, the smell and taste of the limited Akashi Toji were fresh and full-bodied

The surprise came as a glass of Akashi Toji Single Malt Bourbon Cask, a single expression reserved in a Japanese Shochu cask for around three years, and finished in a bourbon barrel for two years.

Only 240 bottles are ever produced, and the bottles are numbered for authenticity. The strong, full-bodied whiskey contained 56.9% alcohol and had a whole mouthfeel, perfect for the rare night celebratory dinner. 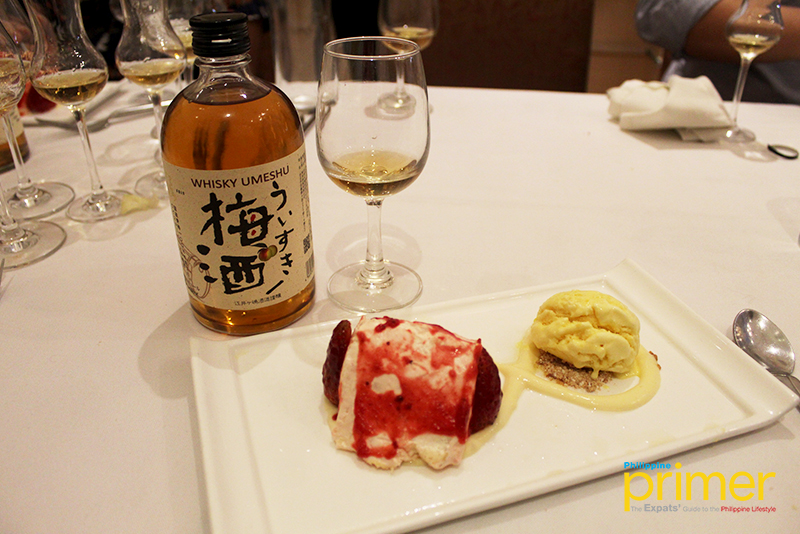 Both whiskey and wine, the plum and sugar are soaked in sake before mixed with Akashi whiskey, giving it its astringent notes and sweetness

To cap the night, the sweet plum Shin Whisky Umeshu was served with the Café Ysabel Strawberry Shortcake and Peach Ice Cream. With sweetness all around, the traditional whiskey flavor balances it out and creates a delicate finish with no drag of bourbon.

The night ended with a toast to Hotei Japanese Premium, Inc. for a wonderful year of whiskey.

For more information on Hotei Japanese Premium Inc., you may visit their website or their official Facebook page.