Good to Know: Firecrackers in the Philippines

The Filipinos have their own way of celebrating and starting the New Year. While there will be people who would rather go to new year’s eve events and jumpstart the year with a night of music and colourful fireworks display, there will also be some who’d prefer to stay at home with their families and loved ones, keeping the tradition that has been going on in the country for decades now.

Lighting up firecrackers and fireworks have always been a part of the revelry during new year’s eve. It was believed to have started in China during the Lunar New Year, where people do this to drive away the bad luck and the bad spirits, and to welcome the change of season as another year starts. It was then adapted by the Filipinos, who continued to develop the industry until it flourished in Bocaue, Bulacan.

Today, there are many groups who are pushing for a “safer” way to celebrate the beginning of the new year – one which doesn’t involve firecrackers as its effects may be harmful not only to people, but also to the environment. While this may not be happening soon, the government still have regulations as to which firecrackers should and should not be used in welcoming the year.

Here are six famous kinds of firecrackers you are most likely to encounter during the New Year:

These are handheld fireworks which give off colourful sparks, flames, and other effects when lit up. These are most commonly used by kids because it is a lot safer than the lusis and other known firecrackers.

Lusis can be the sparkler’s bigger and longer version. When lit up, they also give off bright abd colourful flames and sparks. The colours vary depending on the lusis itself, but the flames it emits are usually red or green.

Triangulo are – you guessed it – triangle-shaped firecrackers made of “Black Powder” and are wrapped with newspaper. One reason why it is commonly used in the country is because it is inexpensive, and does not pose huge shrapnel danger. 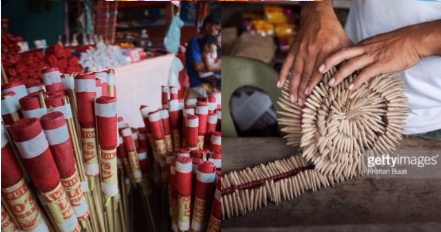 These are rocket-type firecrackers which propels up to 50 feet when lit up. Some groups want this certain firecrackers banned as these are usually the cause of the fire incidents that happen during the eve of New Year.

Sinturon ni Judas – Judas’ Belt – consists of a number of rounds which explodes sequentially. They are usually laid out on the ground or are suspended on trees and walls where they are lit up. It is called Sinturon Ni Judas because of an old Holy Week tradition where people strap a Judas effigy with a chain of firecrackers.

Whether it be a small of a big-explosion firecracker, what’s important is understanding and handling the fireworks with utmost care. It does not really matter whether or not you’ll be celebrating the tradition in parties or in the traditional way – with firecrackers and the lavish New Year’s Eve dinner. It is about who you spend it with and how much fun you have had in welcoming the coming year.