MUSEUM DATES: The Artinformal Gallery in Makati Reopens on Dec 9

As the country reopens slowly, the art sector has been silently working its way to invite art lovers back to museums and galleries. Aside from the National Museum of the Philippines, many small and private galleries are reopening as well to accommodate art lovers who miss art in general.

Recently, one of the famous and go-to art places within the metro, the Artinformal in Makati announced its reopening on Dec. 9. Gracing the upcoming exhibits by artists Brisa Amir and Tosha Albor.

Brisa Amir  | As the Blades Softens, The Fern Yields 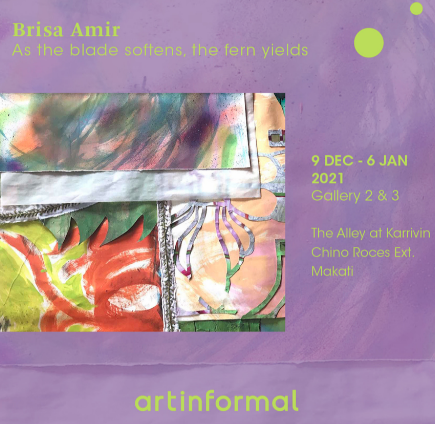 Like foliage peeking through concrete cracks or slowly creeping over gated walls, Brisa Amir peers through impervious spaces and pries them open to yield to nature’s gentle force.

Moved by the quiet thriving of plants in adversity, the artist expresses collective trauma and silent grief in leaf-like collages, funeral bouquets made from old works, torn and sewn together in organic layers.

In pieces threaded with embroidery, she channels nature’s unhurried unraveling while imprinting them with new vistas and experiences through stencils and linear flourishes reminiscent of Matisse’s drawings.

“Reclaiming herself through reclaiming (gated) spaces, she wages a quiet rebellion against the tyranny of violence and individualistic apathy. One with the wisdom that says “as the blade softens, the fern yields”, Brisa Amri opens up in defiance of conditioned selfishness and invites viewers to partake of pleasures of radical vulnerability. 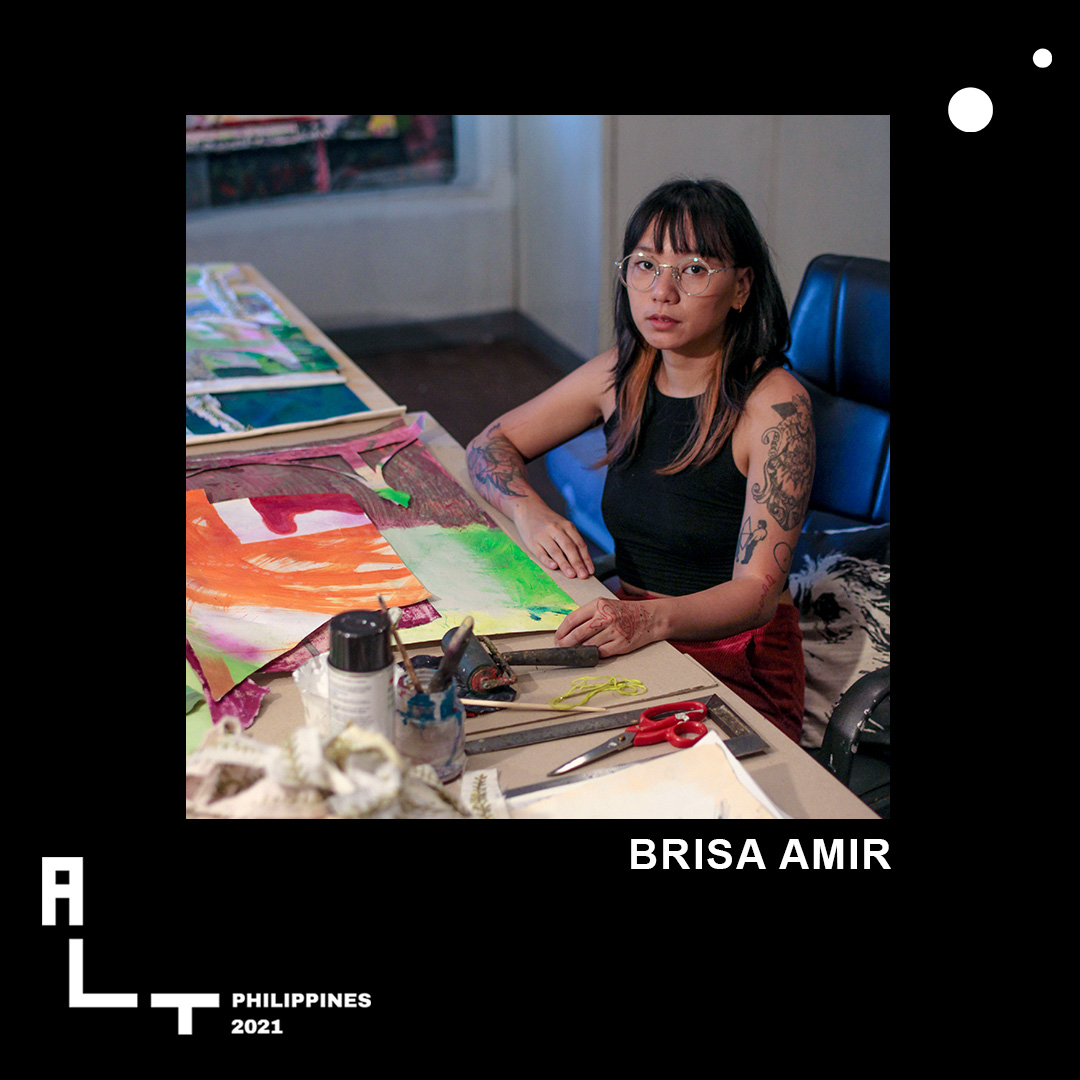 Brisa Amir (b. 1992) paints through textures in her studio and its peripheries. She makes marks through cracks in unfinished walls, while rainfall makes spontaneous stains, and footsteps, paws imprint on paper. Amidst these layers, graphite and industrial paint complement organic mark-making. Beyond a fascination with paper’s materiality, Amir documents daily activities in immersive walks: observing residents improvising missing parts of their homes, collecting objects common to a curb (wood, discarded textile to stitch), and recording structures through thermal paper’s touch.

After graduating with a BFA in Painting from the University of the Philippines in 2017, she held her first solo exhibition Slow Painting at Artinformal in 2018, garnering a feature in Artforum magazine. In 2019, she held a one-woman show in the first S.E.A. Focus in Gillman Barracks, Singapore. Amir is active in local group exhibitions, with the latest held at UP Vargas museum by Patrick Flores’ curatorial team. 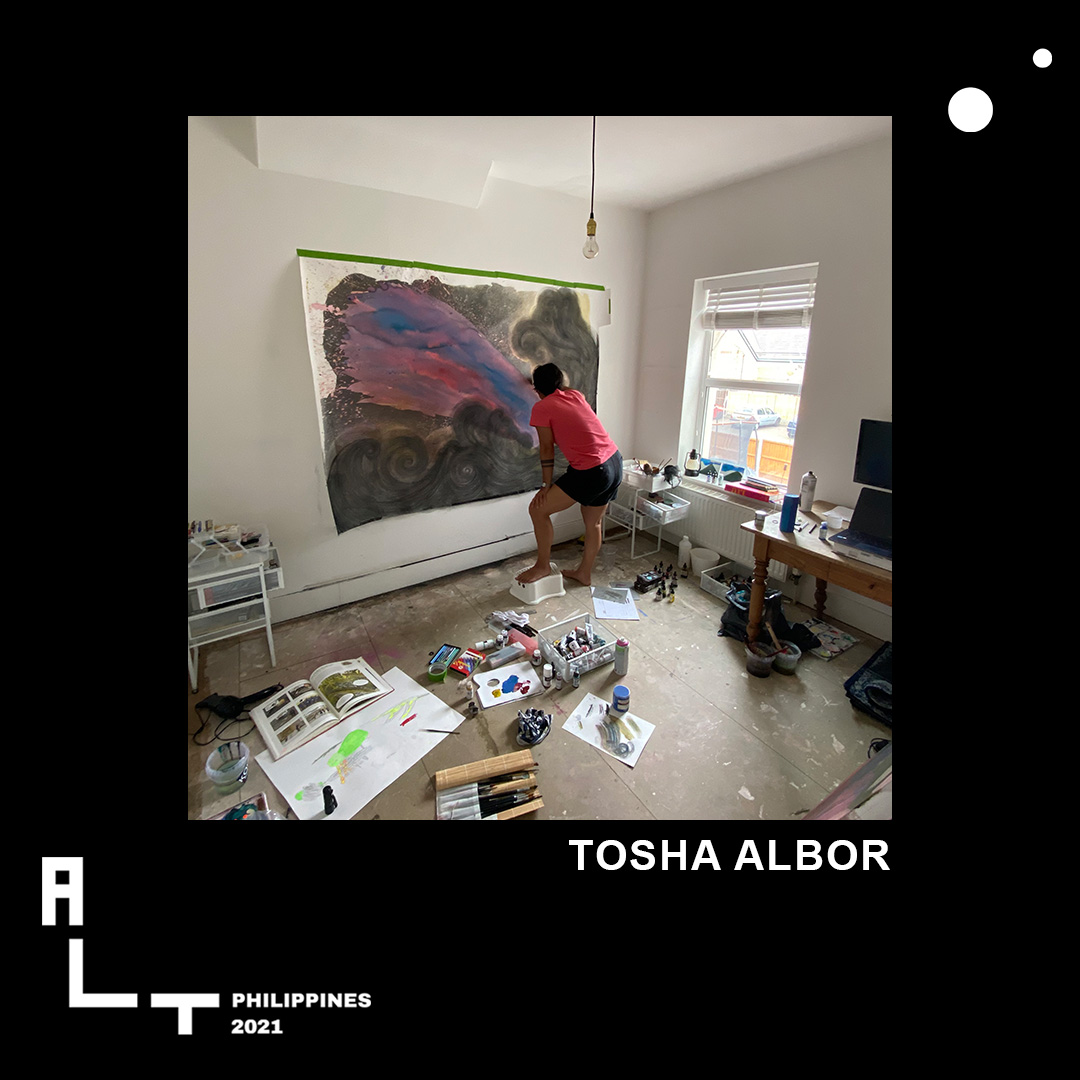 Tosha Albor’s show Residue presents a series of paintings that convey the loss and gains she has experienced in the last year. The works tell a personal story evoking the power of symbolic narrative combined with the artist’s free-form abstract style.

Tosha Albor (b.1982) was born in Manila to an American mother and Filipino father who are both artists. She grew up in the Philippines before moving to the United Kingdom at the age of thirteen. After university in London, she spent several years living in different countries to work for international charities while establishing herself as a visual artist through exhibitions and residencies in the US, Macedonia, Morocco, and the Philippines. After a decade of living abroad, in 2015 she returned to London where she is now based.