A Guide to Eating Your First Balut Egg

Balut is one of the popular staple street food here in the Philippines. It’s a fertilized, 18 day-old duck egg. It also has a cousin called the penoy, an unfertilized egg for those who can’t stand the look of fertilized eggs.

Here’s what you need to know if you plan to eat balut if ever a wandering balut vendor passes by your neighborhood:

Tip# 1: If you hear a man shouting “Baluuut!!”, shout back “Balut!”. They take it as a signal that you want to buy their balut eggs and thus make their way to where you are.

Tip #2: After buying, let it cool down for a bit, as it’s often sold at temperatures often too hot to handle. Start cracking the balut at the pointed end of the shell. This prevents you from spilling your good share of the hearty “soup.” 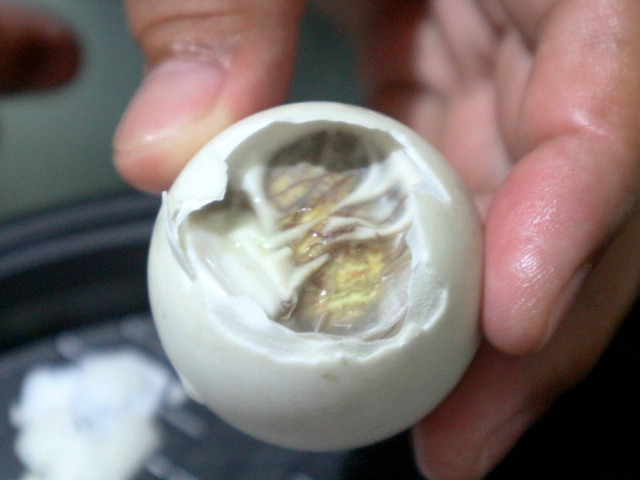 Balut’s soup. It tastes like a bite-sized chicken soup.

All that’s left is to slurp away!

Tip #3: Carefully peel off the shell. It is literally an egg full of surprises!

You’ll usually see the yolk first, but those brave enough to peel it whole will see this: 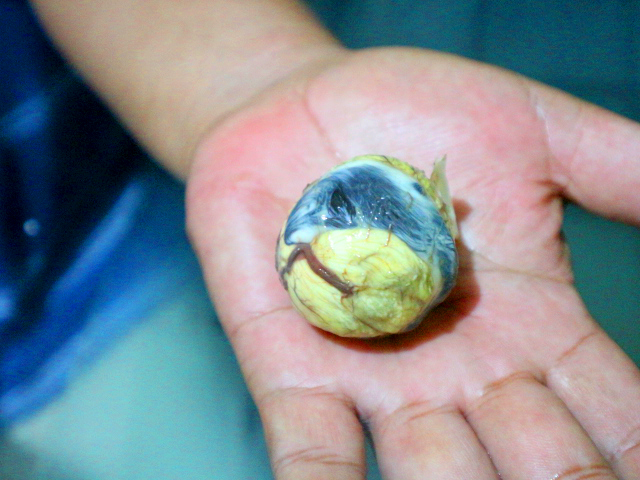 Balut. This is what it looks like if you peel off the shell of balut.

As you can see, the yolk sac surrounds the fetus. It smells similar to a hard boiled egg, although there’s a hint of chicken meat (but not that much).

The hard white part is called albumen, or the future egg whites. It’s often called the bato, and can be compared to a cartilage that is why people don’t eat it often and goes to the rubbish.

Last is the chick. They say that the chick is the best part of the balut, so it’s best not to waste time looking at it. It is best to eaten it’s still hot.

Tip# 4: A dash of salt or vinegar helps.

The wandering Balut vendor often asks if you want vinegar or salt as a condiment. The vinegar gives a sour aftertaste while the salt helps take away the strong scent of the Balut. 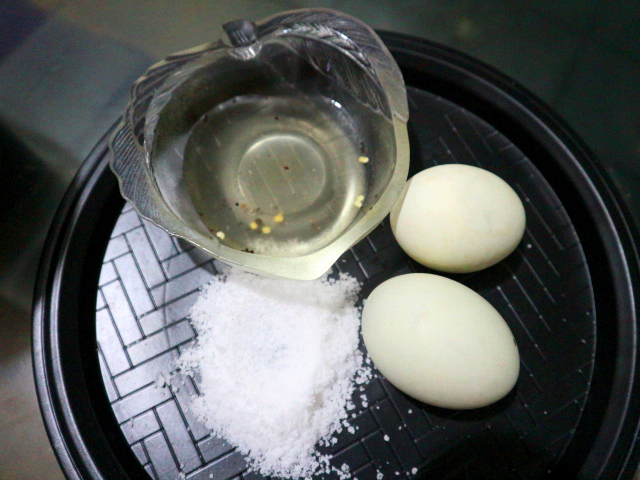 Salt and/or Vinegar. They are usually given in plastic bags, but we’re nature-lovers here at Philippine Primer.

They usually add spices like chili peppers or whole peppercorn. This gives it a little kick as you enjoy your balut.

Tip# 5: It’s best partnered with beer! Yes! you heard that right! Balut usually have a partner in crime: beer! The bitter taste of beer helps remove the aftertaste you get after eating balut.

Balut has become somewhat of a culinary fantasy around the world. It has seen many uses, from simple soups and stews to high-class dishes.

However, we feel it is still best eaten as is: no muss, no fuss, and exactly as what our parents and beer-drinking relatives have taught us.

Cheers to your first balut experience!