American Group Why Don’t We Holds Manila Concert in November

Better brace yourselves as another concert is coming right up before the year ends!

Also read: Korean Group GOT7 LIVE in Manila This October

This time, it’s the five-piece American pop group Why Don’t We for their 8 Letter Tours on November 18, 2019 at the New Frontier Theater in Quezon City. 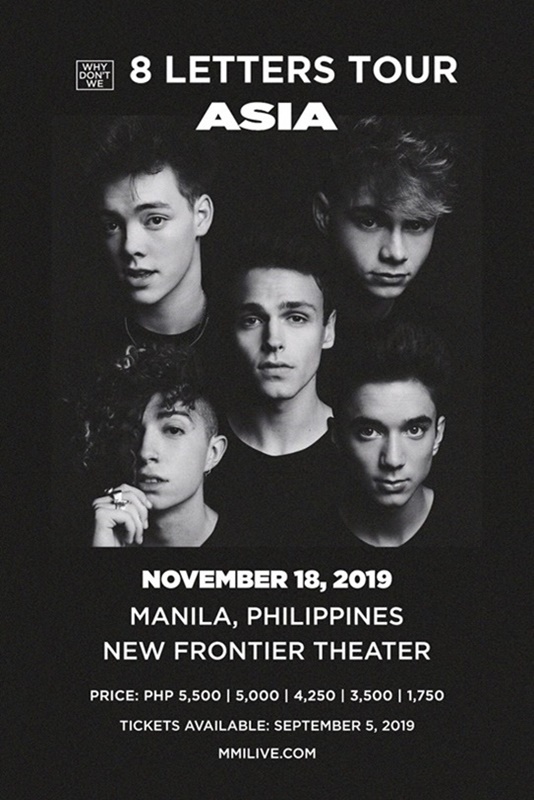 Why Don’t We will embark on their Manila stop of the tour on November 18 at 8 p.m., which fatefully falls on a Monday. It might be worrisome for some of the group’s fans aka Limelights since it’s on a weekday, but what better way to start the week than to spend it having a fun time, right?

Why Don’t We debuted in September 2016 and is composed of five members, namely Daniel Seavey, Zach Herron, Jonah Marais, Corbyn Besson, and Jack Avery. The group recently released the song called What Am I.

Some of their songs include Hooked, Unbelievable, Trust Fund Baby, and 8 Letters, which became the namesake of the tour.

Prior to the concert, a fan party was presented by concert organizers Warner Music, Live Nation, and MMI Live last September 7 at the Trinoma Cinema Lobby.

What: Why Don’t We Manila Concert
Where: New Frontier Theater, Quezon City
When: November 18, 2019 at 8 p.m.
Ticket Information: You may still purchase the tickets on TicketNet.