Opening this July 3, the Japanese Film Festival EIGASAI surely offers more than its long list of amazing films—along with it are exciting activities from The Japan Foundation, Manila. These include a Director’s Talk with filmmakers and their features films, and of course, a special performance you can’t miss!

The opening night of this year’s EIGASAI features a performance by Shamisen player Keisho Ohno on July 3, 6 p.m. at The Grand Atrium of Shangri-La Plaza Mall. Ohno is a master of Shamisen, a three-stringed Japnese traditional music instrument. 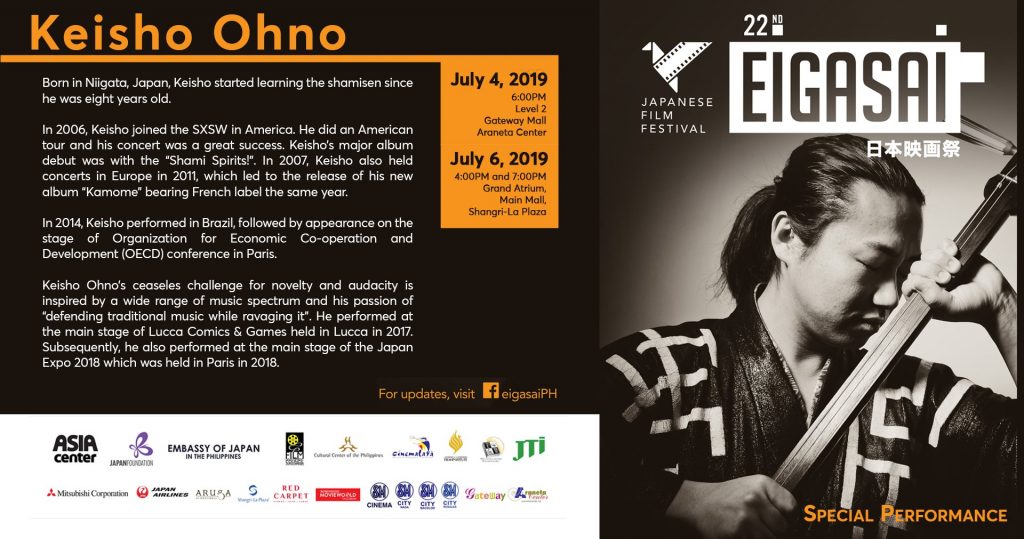 He has since toured America, Africa, and Europe for the Organization for Economic Co-operation and Development (OECD) conference, as well as the Japan Expo 2019 in Paris, France.

One of his original music compositions named Samurai was used as a theme song for the New Year Ekiden or marathon relay race held and broadcasted nationwide on the New Year in Japan.

Other public performances include the following schedules:

Exciting events will soon be announced for this year’s Japan Film Festival EIGASAI!

Which films and activities are you looking forward to? Let us hear your thoughts in the comments below!