Nerve-wrecking Halloween Events to Look Forward to this 2017

Halloween is the most exciting time of the year for kids and the kids at heart. It’s when they get to dress up in cool costumes, go trick-or-treating, and spook each other with silly, scary stories. It’s a fun, festive holiday that brings a lot of laughs—and candies. We have listed upcoming Halloween parties and events that will definitely spook you out and leave you laughing the HAHAlloween way! 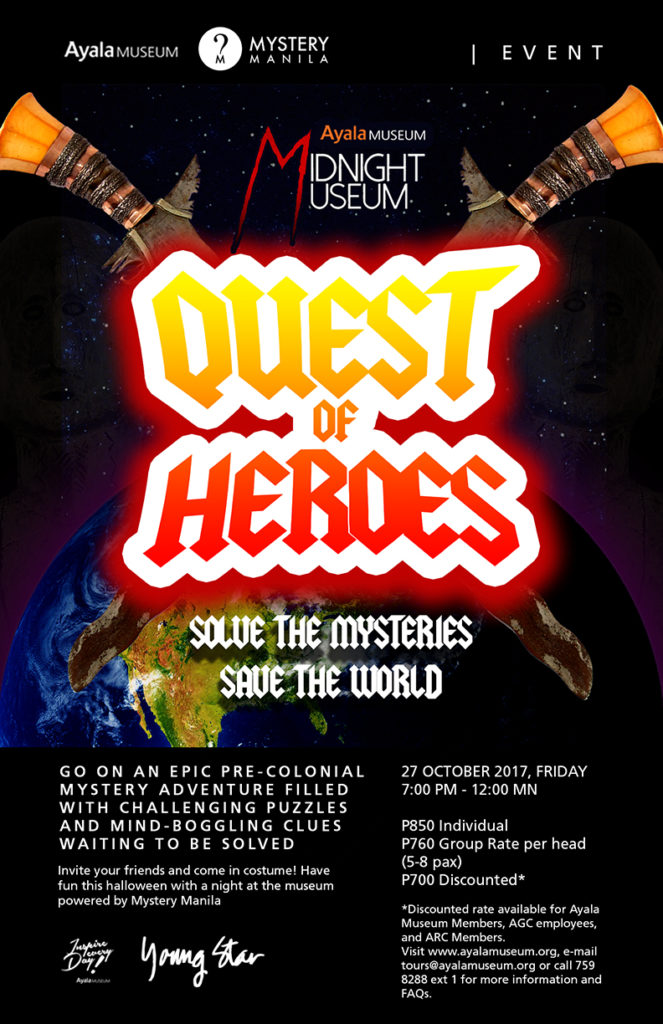 Now on its 4th year, the Midnight Museum lays down another challenge for fans of the room escape game in time for the spooky Halloween. This year, you will be taken on an epic pre-colonial mystery adventure that will surely fire up your neurogenesis as you solve mind-boggling puzzles and attempt to save the world. Be sure to come in your hero costume! 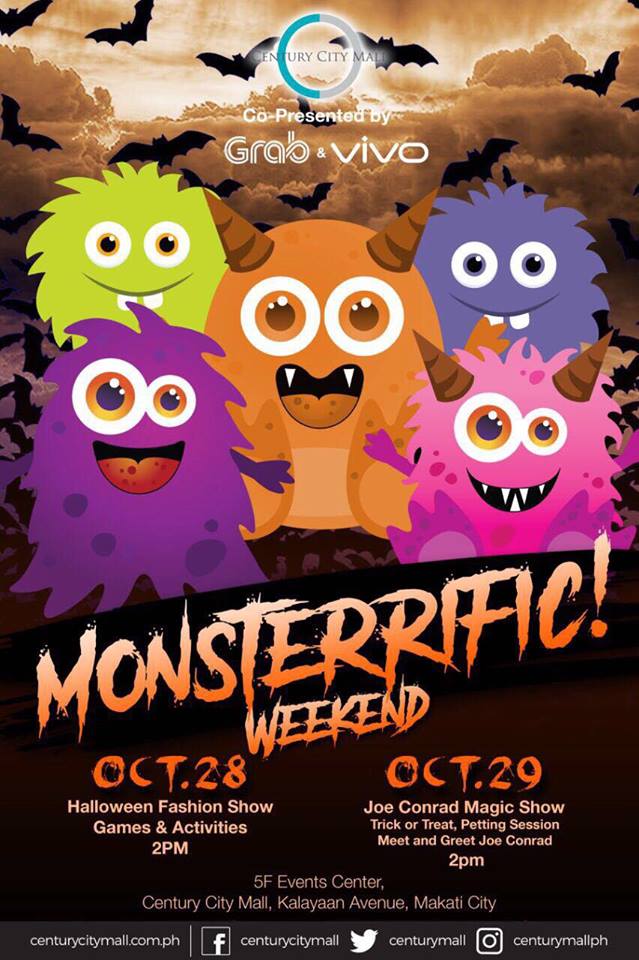 Century City Mall in Makati will let kids and young at hearts enjoy a supposed to be spooky day. Has your child recently transfigured into a witch or wizard? If so, now is the perfect time of year to bring his or her fantasies to life. This is a 2-day event where kids can showcase their monsterrific costumes while enjoying a bunch of activities from different booths.  They can do mask making, robotics workshop and photo booth while munching candy treats from their pumpkin buckets. 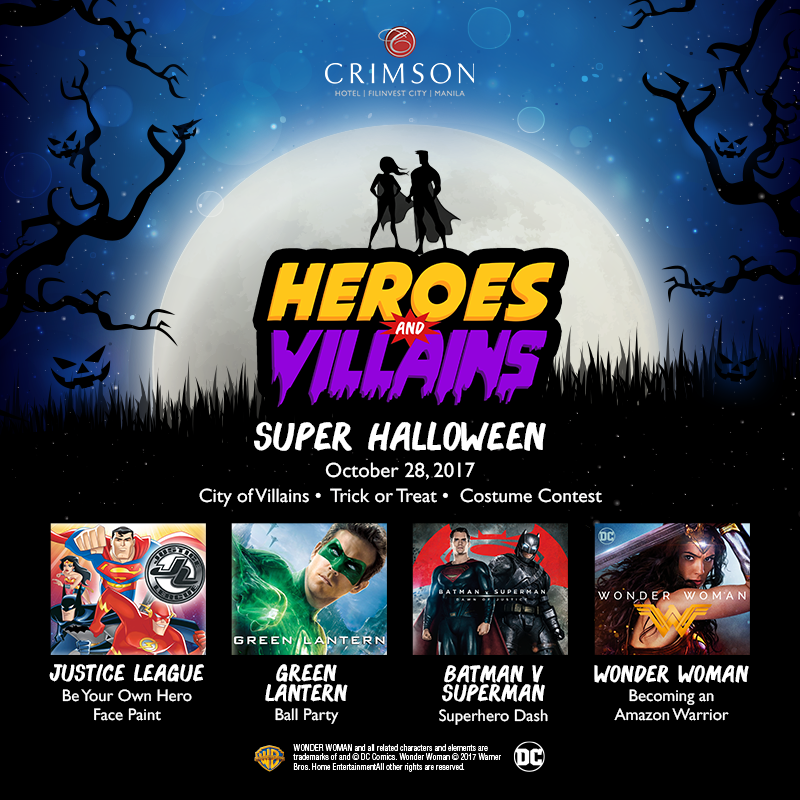 Crimson Hotel in Alabang will be having a unique Halloween party both for the young and the young at heart by having not just superheroes but villains as well to come together and enjoy a nerve-wrecking, spooky yet fun-filled night. Become a hero or a villain yourself and assemble on October 28, 2017! 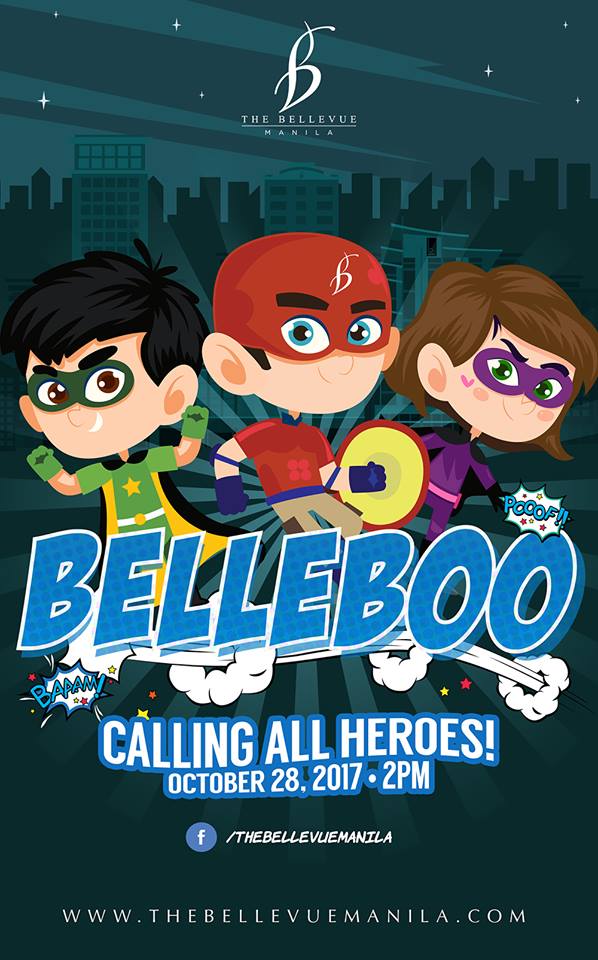 Guests have an option to come to the event wearing their favorite superhero costume or costumes they will be creating for themselves. Come and be part of a heroes assembly and save the world through trick or treating! Happening on October 28, 2017, 2 pm onwards, come and be part of The Bellevue Manila’s “Belleboo”, the largest superhero gathering in the South!

DETAILS:
What: The Bellevue Manila’s Belleboo, the largest superhero gathering in the South
When: October 28, 2017 (2 pm to 5 pm)
Where: The Belleview Manila
Ticket Price: Php 1,100 per head

Also Read: The Bellevue Manila’s Belleboo, the largest superhero gathering in the South 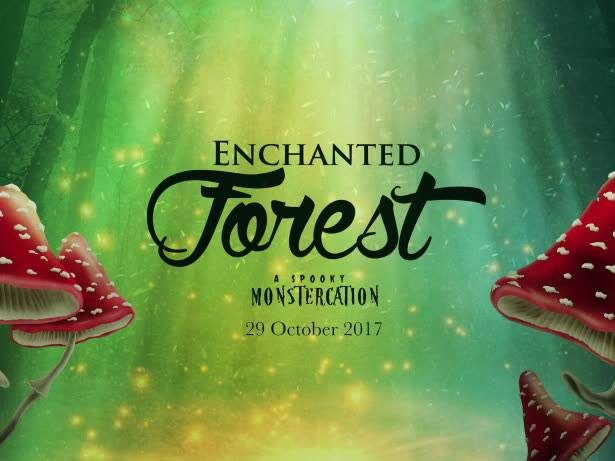 On October 29, 2017, be prepared and join Enchanted Forest: A Spooky Monstercation at the Isla Grand Ballroom. The doors open at 1:00 pm, this promotion is at Php 2,200 net per person. This offer includes daily breakfast for 2 adults and 2 children, ages 5 and under, 2 tickets, with snacks, to the Halloween event, and additional tickets available at a 20% discount. Parade your costumes and enter the ancient world of myths and legends while discovering the tales of mythical creatures and supernatural beings as they come to life this Halloween at EDSA Shangri-La Manila. 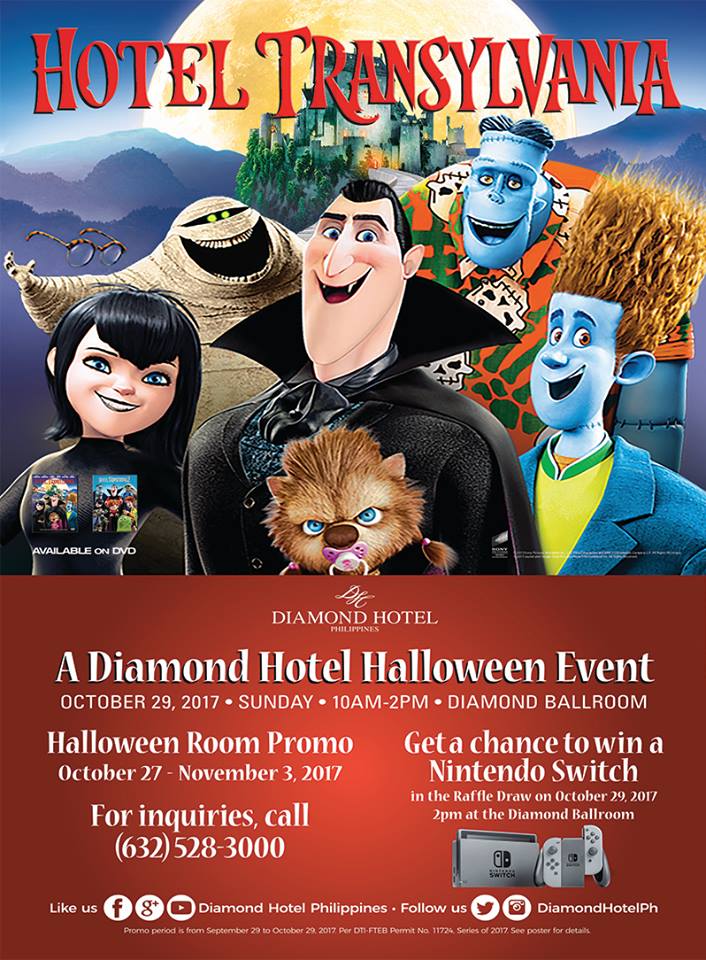 Even monsters need a vacation. Diamond Hotel Philippines welcomes children of all ages to Count Dracula’s lavishly luxurious lair where monsters of all kinds party the night away. Featuring the animated movie ‘Hotel Transylvania,’ where monsters go to get away from it all, discover a different world and meet a new circle of friends (or fiends) at the Diamond Ballroom on October 29, 2017, from 10 am to 2 pm.

DETAILS:
What: Hotel Transylvania: A Diamond Hotel Halloween Event
When: October 29, 2017; 10 am to 2 pm
Where: Diamond Ballroom, Diamond Hotel, Manila 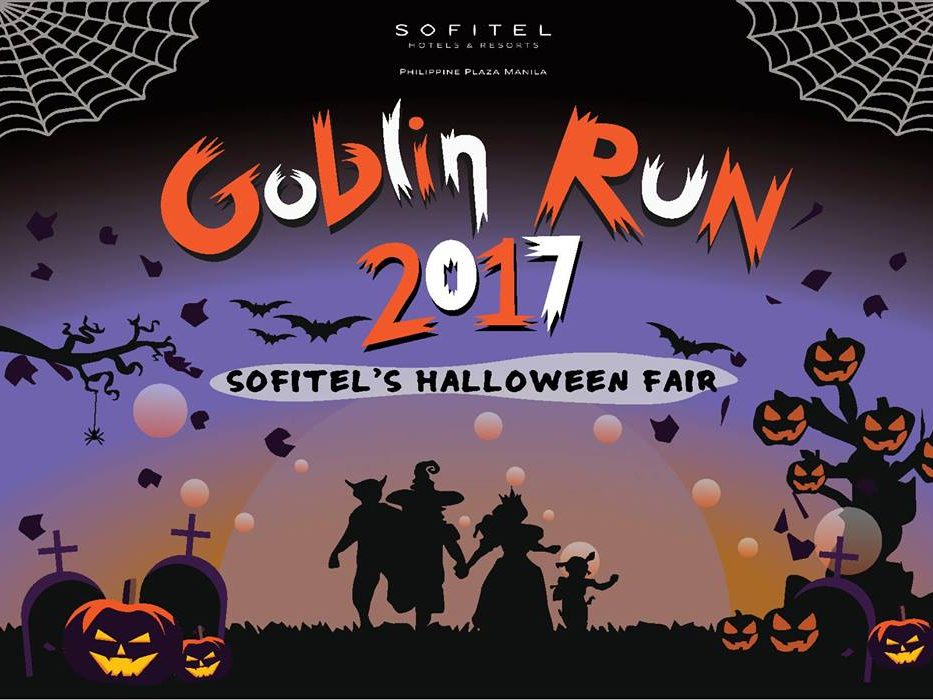 The Spookiest runaway in the Metro is taking place in Manila this coming October 29, 2017! GOBLIN RUN 2017 is a Halloween project under Sofitel Manila. This fun run is a scary obstacle-course-themed 3K and 5k run open to all ages with a number of spooky yet exciting obstacles, bubble machines and photo-op materials along the route. 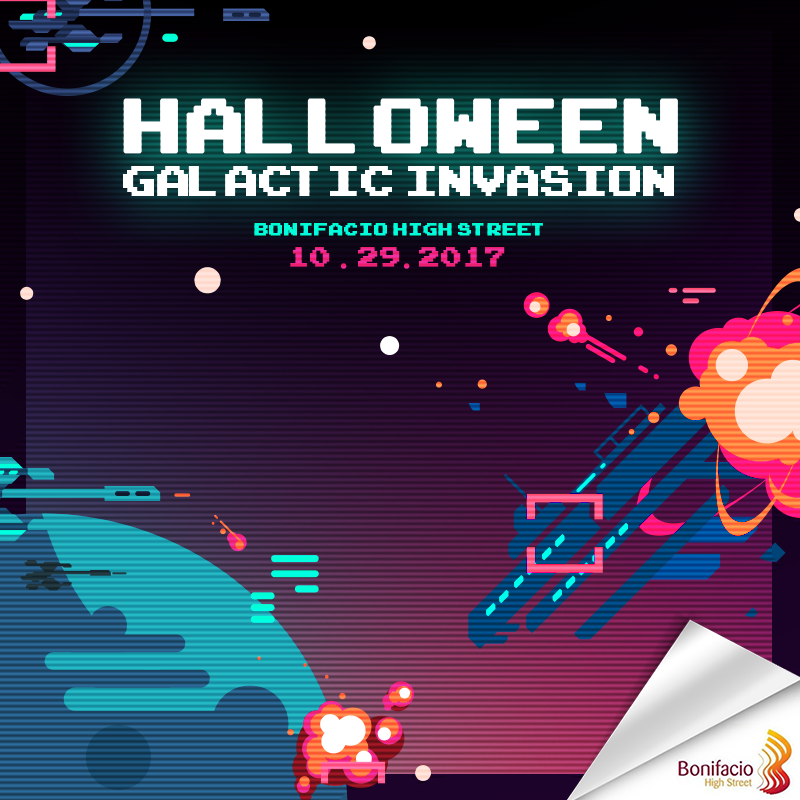 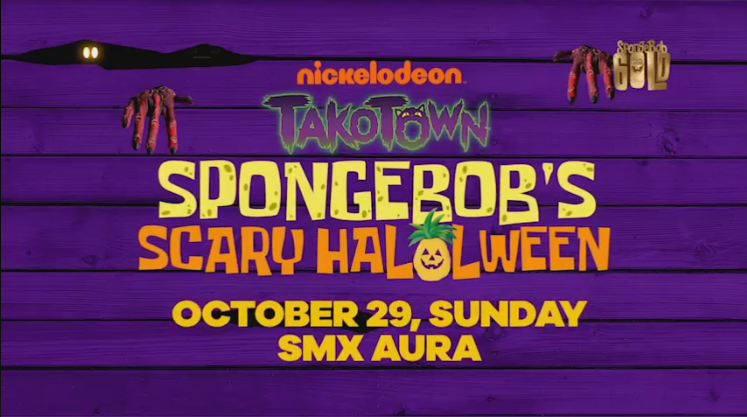 Its once again the spookseason where kids together with their families can enjoy a fright express through Nickelodeon’s Halloween event:  Spongebob’s  Scary HaLOLween happening on October 29, 2017, 12 PM onwards at SM Aura in BGC, Taguig City! Nickelodeon’s Takotown: Spongebob’s Scary HaLOLween is the perfect trick-or-treat activity for kids and the rest of the family to enjoy this October. With terrifying yet exciting booths that would give everyone a good time on Halloween, this event is indeed a go-to event for everyone especially the young and the young at heart. 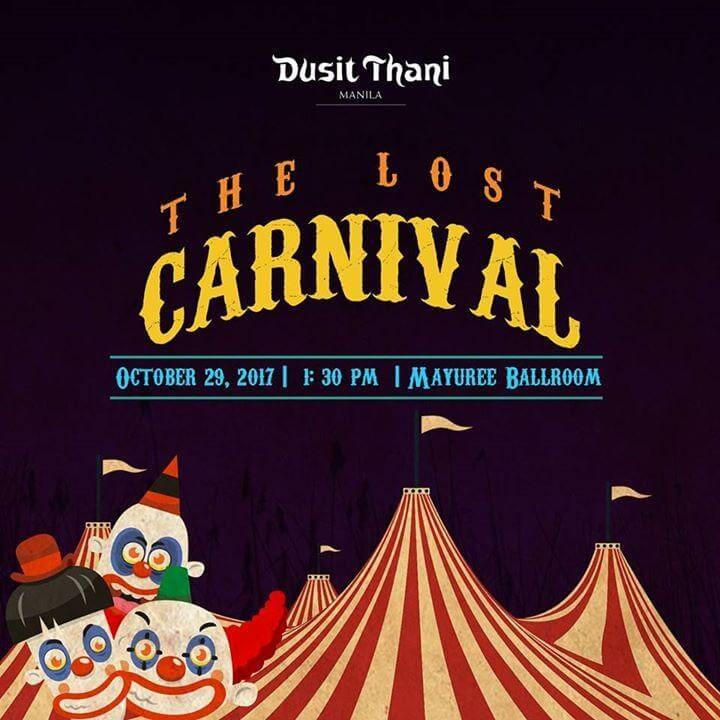 With an old and rustic feel, get to experience the dreadfulness and creepiness of an abandoned amusement park that has not been touched for a number of years through Dusit Thani’s The Lost Carnival happening on October 29, 2017 from 1:30 pm onwards at the Mayuree Ballroom in Dusit Thani Hotel, Manila. 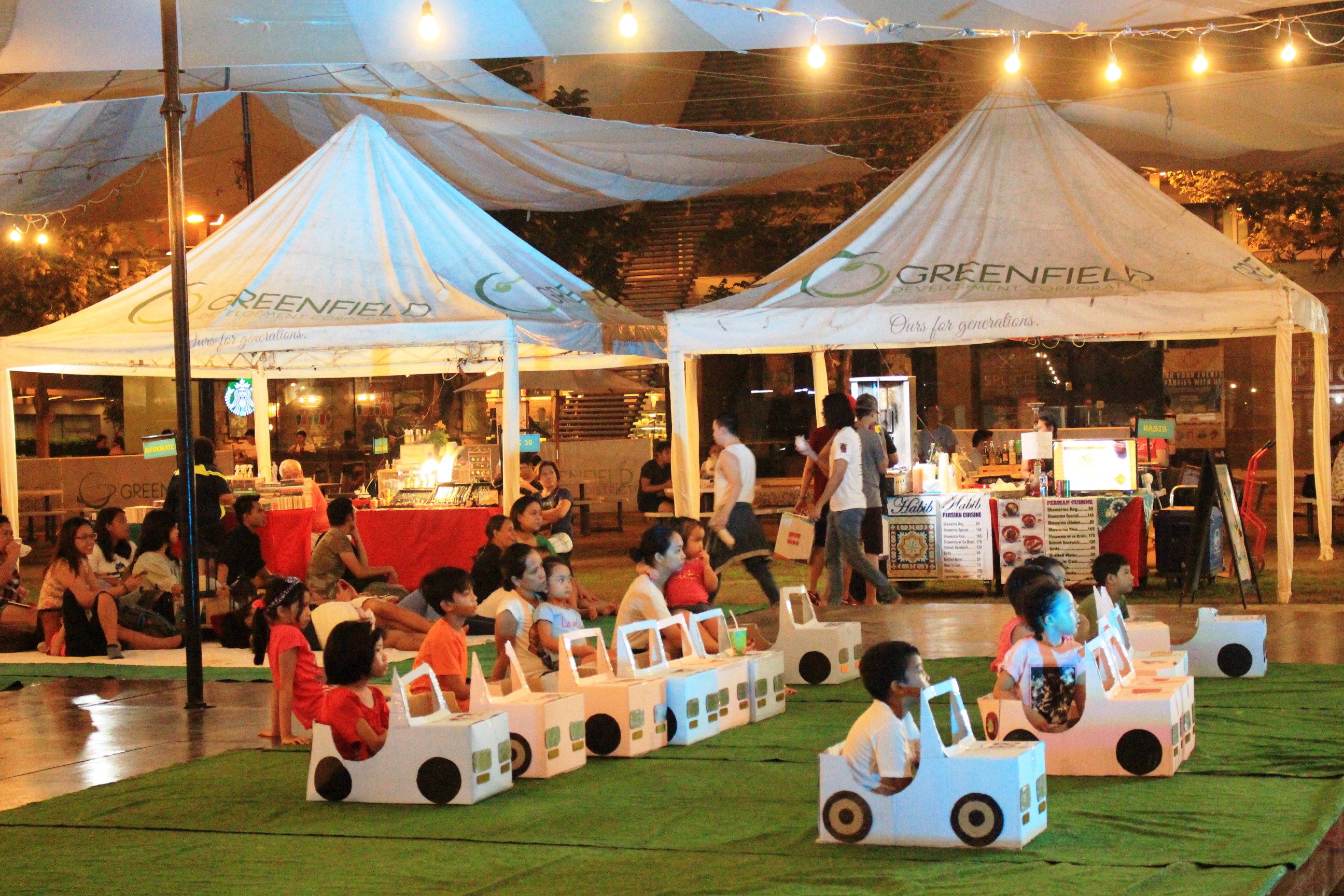 The Greenfield District in Mandaluyong is known to be a lifestyle hub that offers a lineup of weekly events designed to cater to the tastes of its surrounding urban dwellers. With the mission to excite the market, Greenfield District is having its very first Halloween Party at the Sunset Fair with the theme of The Traveling Circus this coming October 29, 2017, where we can look forward to a Halloween party filled with surprises for the entire family.

Ayala Malls’ To Infinity and Beyond (October 29-31)

Come and be part of a one-night-only affair and help protect humankind from alien attack!  One event pass will allow participants to the following activities: ExtraTRICKestrial Treats, Cosmic Invasion, one  Space Crafstellations activity and, one Astronomical Playoff activity. Happening on October 28-29 in Alabang Town Center, October 30 in TriNoma, and on October 31 in UP Town Center and Fairview Terraces, come and combine High Society style & a futuristic atmosphere in a jaw-dropping space invasion.

DETAILS:
What: Ayala Malls’ To Fun and Beyond
When:

Also Read: Ayala Malls’ To Infinity and Beyond

The Mad Halloween Tea Party at the Westgate Center (October 31) 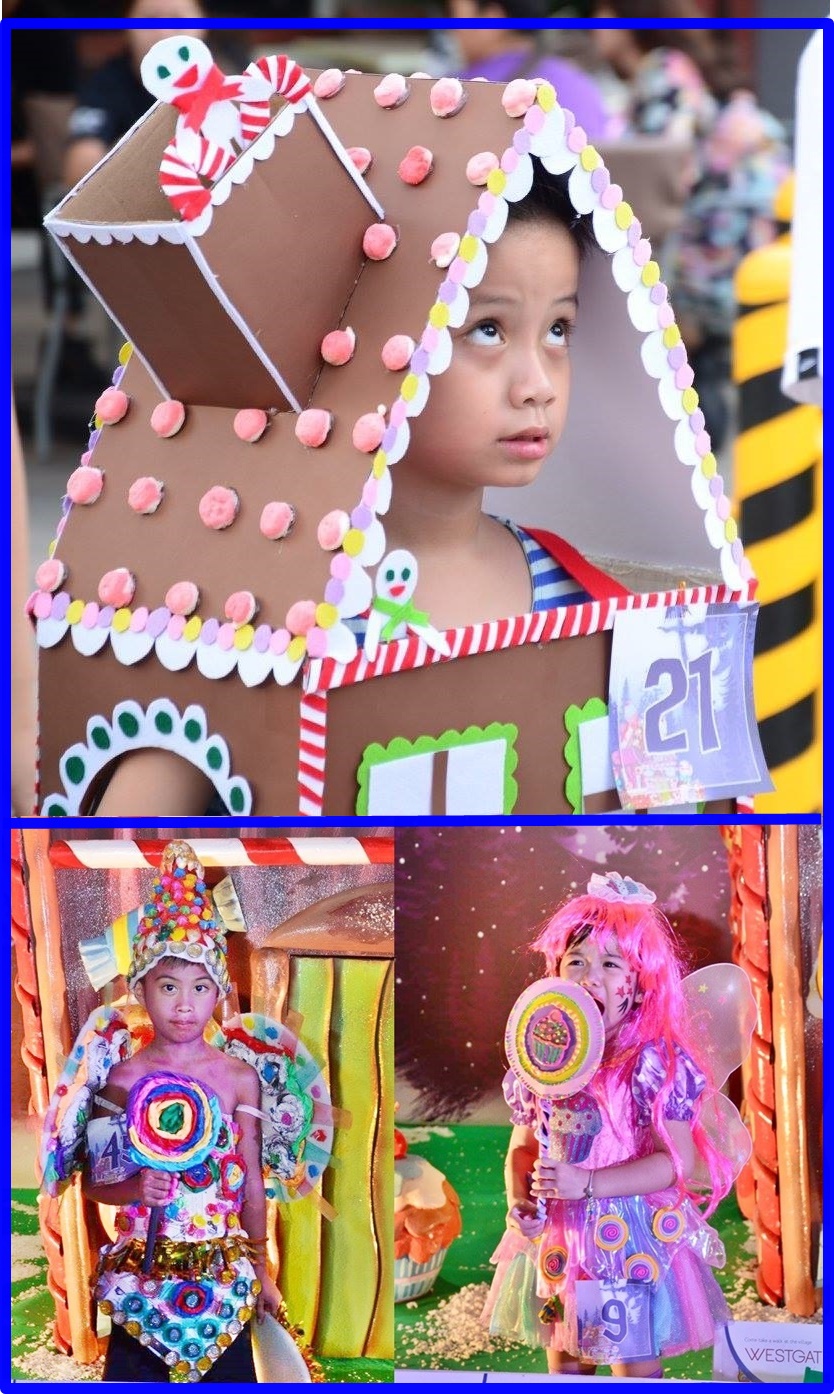 Get ready to be taken deep into Wonderland at The Mad Tea Party, which will also feature a bubble show and magic show, a sure treat for both children and parents. There will also be face painting and glitter tattoo sessions, colorful balloon sculptures, tasty cotton candy, free loot bags, and a photo booth to commemorate your family’s Halloween celebration in Wonderland. To join the Halloween costume contest, just purchase a minimum of Php 1,000 single receipt or two accumulated single receipts from Westgate Center establishments from Oct. 16 to 30 (10 a.m. to 9 p.m.) and Oct. 31 (10 a.m. to 4 p.m.) and claim your Halloween Event pass at the Activity Park registration booth on Oct. 31.

DETAILS:
What: The Mad Tea Party at the Activity Park
When: October 31, 2017 at 5:00 pm
Where: Activity Center, Westgate Center, Filinvest City, Alabang, Muntinlupa

Who said that Halloween is only for Kids? Come and be part of a nerve-wrecking and spine-chilling Halloween event brought to you by The Palace Manila happening on October 31, 2017!  On its 3rd year happening this coming October 31, 2017, come and be part of an event that will take you to an enchanted and magical world through Valkyrie Nightclub’s Mystical Garden and lovely freaks of the Revel Horror Show! 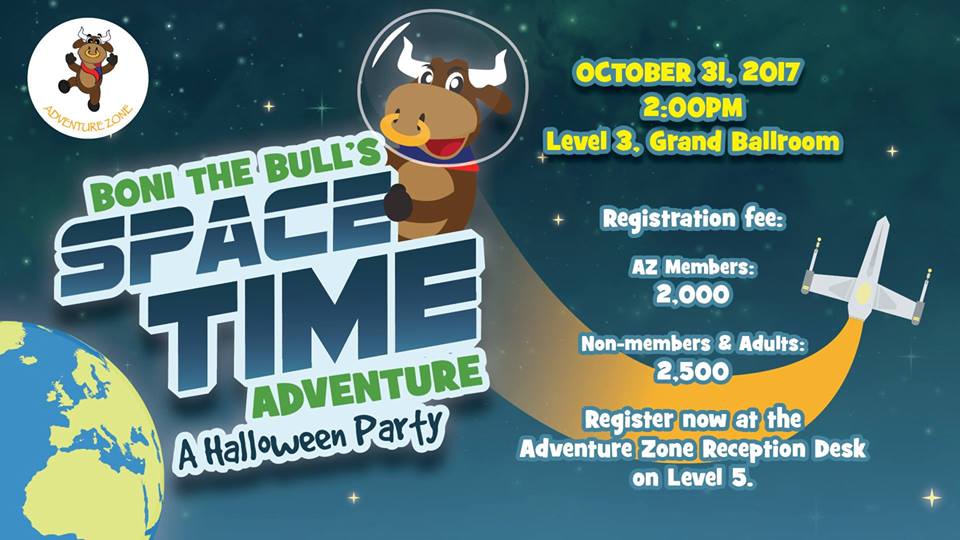 Participants, space cadets entering the space station, are required to be in their best space gear for a chance to win an overnight stay in Shangri-La at the Fort. Other raffle prizes will also be given away. Have a fun celebration of Halloween with your kids with Shangri-La at the Fort’s Halloween Party: Boni the Bull’s Space-Time Adventure happening on October 31, 2017!

Also Read: Halloween Party at Shangri-La at the Fort for Space Kids 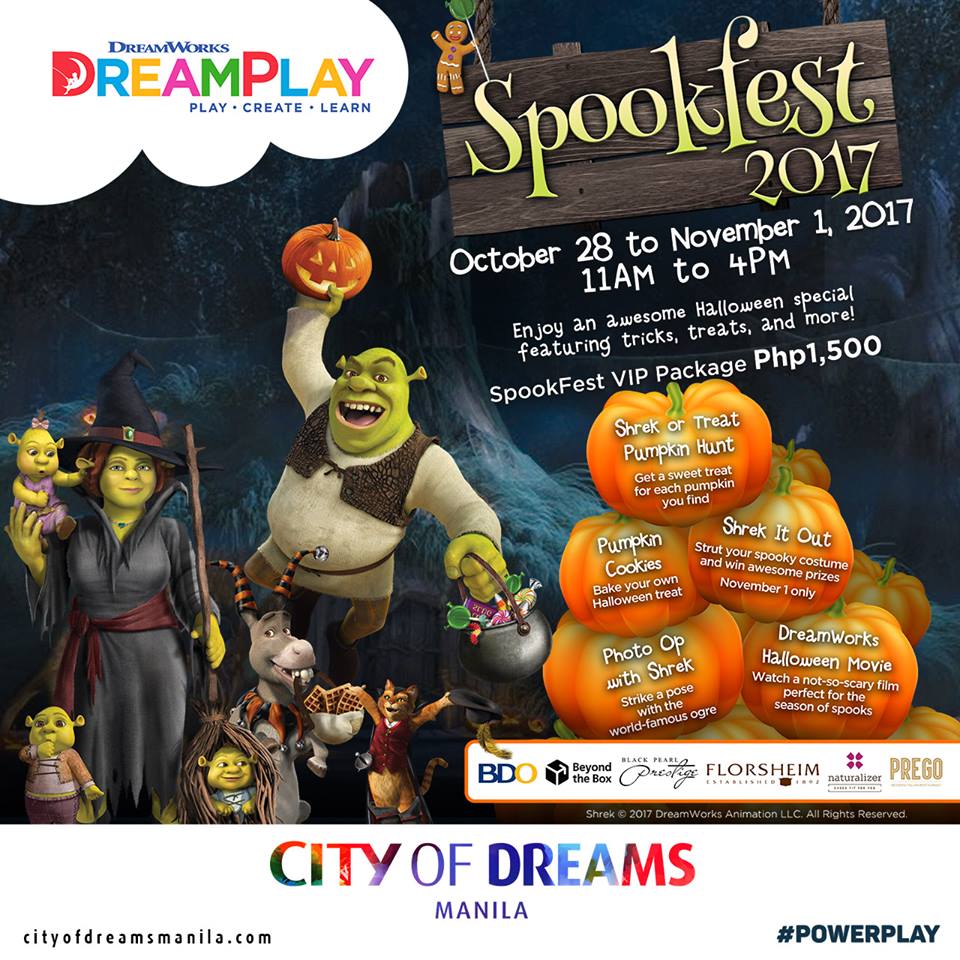 Have a spooky and happy Halloween only at DreamPlay! Enjoy a Halloween event like no other at City of Dreams for a day of tricks, treats, and more! Happening from October 28 to November 1, this Spookfest 2017 will surely make your Halloween more fun and exciting! 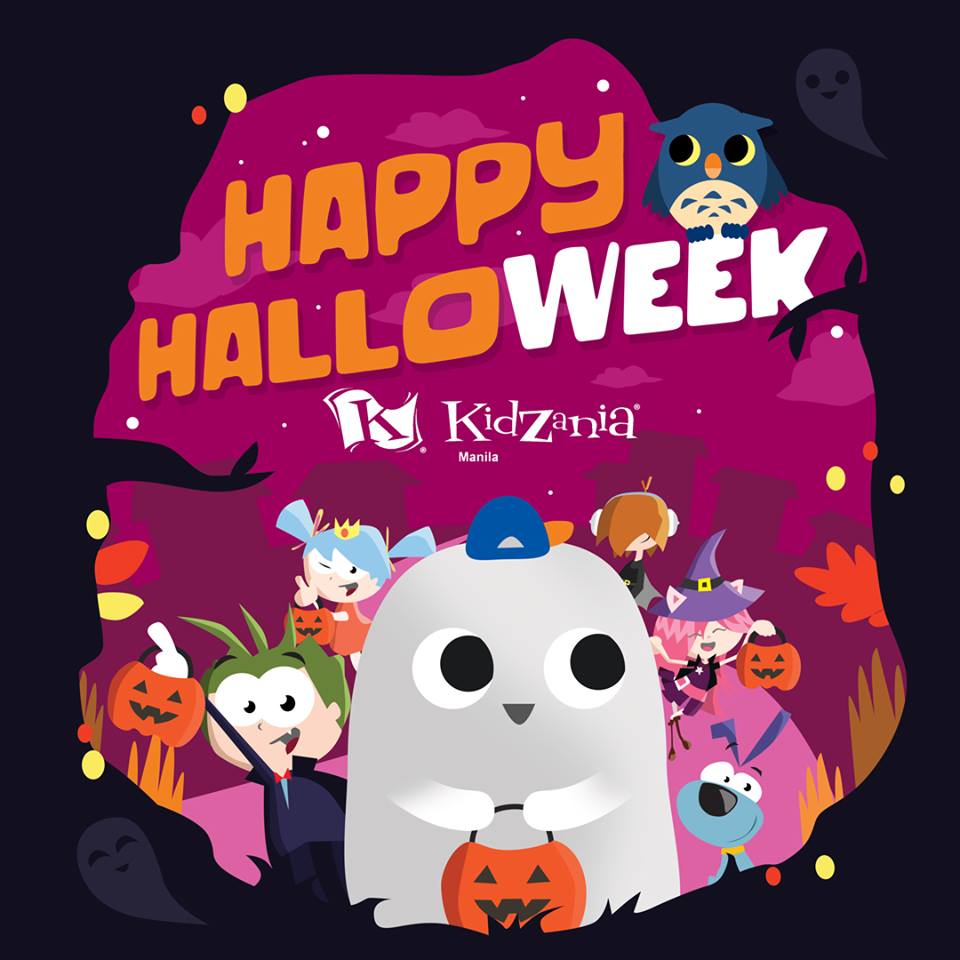 This Halloween season, Kidzania Manila will be celebrating a week-long celebration for tricksters and the young at heart. Happening from October 28 – November 5, 2017 at Kidzania Manila, Park Triangle North, 11th Ave, BGC Taguig City, be part of a spooktacular and exciting event that will leave you wanting more!