The Intramuros Administration (IA) opened Museo de Intramuros to the public, built on the former site of San Ignacio Church of Intramuros, Manila. The Museo features the history of Catholic evangelization in the country. The building of Museo de Intramuros is designed from the original Casa Mision Convent of the San Ignacio Church.

“There are two museums that were conceived by the Intramuros Administration: one is Museo de Intramuros, and the other one is the Museum of Casa Manila, where house parts and furniture are displayed,” Dino Carlo Santos, and IA curator tells us during our tour.

Opened this May, the Museo de Intramuros is a museum for the Philippine art of religious pieces. The country is the only Christian nation in Asia since it was introduced in 1565 by Spain. The wall colors are chosen to set the museum pieces apart, making them more prominent.

The Museo de Intramuros is built on top of the ruins of the Church of San Ignacio, a Jesuit church designed by a Filipino architect Felix Roxas in 1878. The museum is constructed based on the architect’s original design atop the old Casa Mision Convent, which is part of the church.

Upon entering, the first room you’ll see is the exhibit of wooden carvings of the Principal Patroness of the Philippines, the Immaculate Conception.

Meanwhile, the saints of the first religious orders that came to the Philippines are displayed at The Religious Orders room. This includes St. Augustine, St. Thomas Aquinas, St. Francis of Assisi, and St. Ignatius of Loyola. The country’s oldest university, University of Santo Tomas’s patron saint is featured at the museum.

For now, the pieces are exhibited individually to show Philippine woodcarving design. Most of the museum pieces are acquired by the Intramuros Administration while others are donated.

The Religious Colonial Paintings trace the history of Philippine religious colonial art. An art historical approach was used in curating the gallery showcasing the different regionalistic styles and techniques applied such as miniaturismo techniques developed during the Spanish colonial art period. The centuries-old paintings are featured here and grouped by region.

With walls painted with light blue, the exhibit of Liturgical Items and Sacred Vessels shines through. Ornate chalices, thurible, monstrance, that are made from silver and gold are encased in a glass display. The Silver Collection takes note of the different types of craftsmanship when it comes to silversmithing. Silversmithing using engraving (left) and the repoussé and chasing (right) techniques are shown here side by side.

Lastly, the Indio Response is meant to tell the story of how early converts produced sculptures from the anito-looking Crucifixion wood carving to the more inspired, ornate urnas (a stand for a saint).

“Here you will see the initial point of contact with the indigenous religion and the foreign religion, which is Christianity,” Dino explains.

Please note that photography is prohibited on the 2nd floor.

There is a separate floor dedicated to the history of Intramuros, also called the Walled City, featuring miniatures of the original church structures. There used to be seven churches inside Intramuros.

The two surviving churches in Intramuros is the San Agustin Church and the Manila Cathedral, the latter having gone through several restorations to its current image. While behind the museum is the on-site restoration of the San Ignacio Church, still in construction.

“Museo de Intramuros is a work in progress,” says Dino. “The Museo was opened to introduce the museum to the public but this is all temporary.” IA is still working on the permanent exhibit.

Currently, the Museo shows only 30% of the collection the IA has curated and collected through the years. The items yet to be added to the exhibit are smaller items that require display cases. Upon entering, guests will be asked to sign in the visitor’s log book. Smoking, eating, drinking, and vandalism are prohibited. Umbrellas and big luggage are not allowed inside and should be left with the staff at the entrance.

Photographs for souvenir and educational purposes are allowed. However, photography on the second floor, especially the paintings and prints, are strictly prohibited.

Entrance to the museum is free until November 2019. The Intramuros Administration is expecting more Filipinos and foreigners to visit the Museo and support the final exhibit opening with their complete collection of Philippine ecclesiastical art in the future.

Also read: Inside Intramuros: A Tour in Manila’s Walled City Museo de Intramuros is at the old site of the San Ignacio Church at the corner of Arzobispo and Anda Streets, Intramuros, Manila 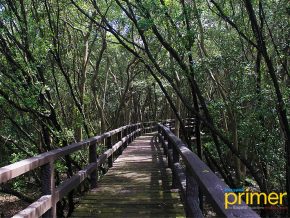