Catch Swing Out Sister Live in Manila this April

Get ready to go back to the good old days as the iconic English pop duo Swing Out Sister heads back to the Philippines for a concert series! Catch them at the Smart Araneta Coliseum, Quezon City on April 16, 2020 for the Manila leg of the series.

The duo will then head to the SMX Convention Center Davao on April 17 and to Waterfront Hotel in Cebu on April 19 to cap off the show. 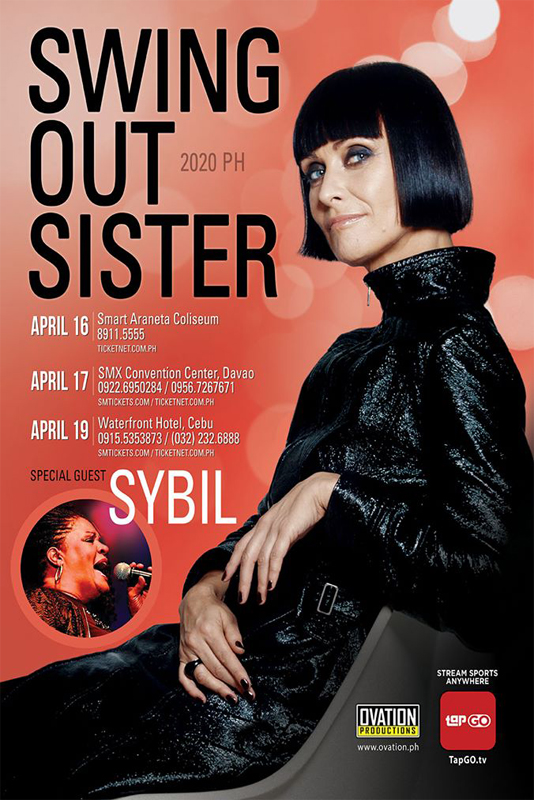 Swing Out Sister is composed of Andy Connell (keyboards) and Corinne Drewery (vocals). They are best known for the song “Breakout” which reached #4 on the 1986 UK Singles Chart and #6 in the US’ Billboard Hot 100 chart in 1987. In the same year, they also released their chart-topping debut album titled “It’s Better to Travel.”

It was more than a decade ago when Swing Out Sister first came to Philippine shores for their 2008-2009 Asia Tour.

For their 2020 Philippine concert series, the duo will be joined by Sybil, an American R&B singer known for her songs during the 1980s to the 1990s. Her self-titled album in 1989 became her biggest-selling album in the USA.

Prepare to sing your hearts out as Swing Out Sister once again takes the stage on April 16, 2020 at the Smart Araneta Coliseum, Quezon City. Tickets to the Manila concert are available via Ticketnet while the tickets for the Davao and Cebu may be availed from Ticketnet and SM Tickets.

What: Swing Out Sister Live in Manila
Where: Smart Araneta Coliseum, General Roxas Ave., Cubao, Quezon City
When: April 16, 2020
Ticket information: Ticket prices listed below are for their Manila concert. Tickets are available via Ticketnet Online and Ticketnet outlets nationwide.

For their Davao and Cebu concert, you may refer to SMTickets.