Heads up Black Stars! Wilbros Live and Midas Promotions bring pop-rock icon and global recording superstar Avril Lavigne to Manila for her highly anticipated “Head Above Water World Tour” in Asia! The concert is set to happen on May 20, 2020, at the Araneta Coliseum, Quezon City.

Lavigne’s “Head Above Water” tour kicked-off last September 14 to support her sixth studio album of the same name. The tour marks the first time in five years that Lavigne set-out for the road. 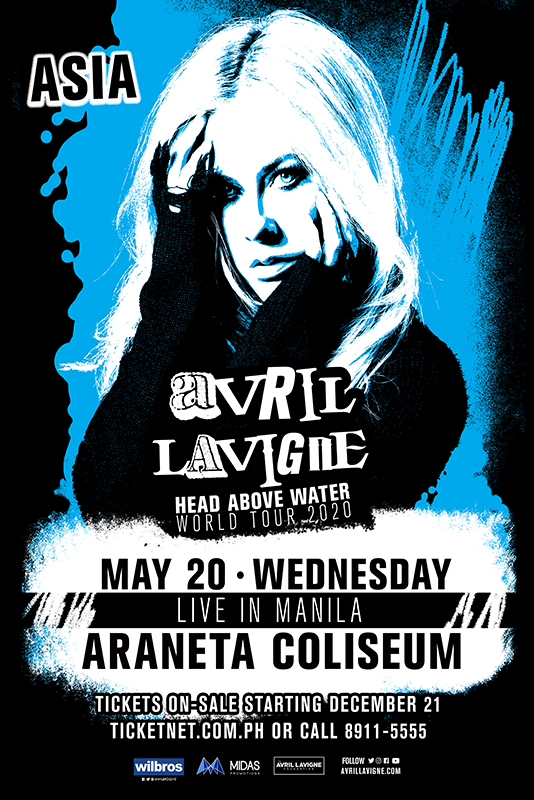 Avril Lavigne hails from Canada and is considered to be a key musician in the pop-punk music scene, earning her the title of “Pop Punk Queen”. She is one of the singers who paved the way for female-driven and punk-influenced pop music.

She debuted in 2002 with the studio album “Let Go,” which carried her breakthrough single”Complicated” that catapulted her to fame. Since then, Lavigne has been a recipient of multiple awards including six BMI Awards, three Guinness World Records and several MTV awards among others.

Lavigne is known for hits such as “Sk8er Boi,” “Wish You Were Here,” “When You’re Gone” and “Girlfriend” among others. Locally, Lavigne was nominated in the 2008 Myx Music Awards in the Favorite International Video category for “Girlfriend”.

Catch Avril Lavigne’s Head Above Water Tour in Manila on May 20, 2020, at the Araneta Coliseum, Quezon City. Tickets will go on sale on December 21, 2019, 10 a.m. at TicketNet outlets nationwide and online.

For more information, you may visit Wilbros Live’s official Facebook page. For ticketing queries, you may contact TicketNet at 02-8911-5555 or visit TicketNet online.

This is a press release. Edits were made prior to publishing.
Images courtesy of Wilbros Live.