The 13th edition of the International Silent Film Festival (ISSF) Manila is happening on August 30 to September 1, 2019 at the Samsung Hall, SM Aura Premier, Taguig City.

Albeit being the first of its kind in Asia, it is not known to many that silent films have loyal fans who truly love the genre. Year after year since 2007, these audiences join the ISSF to witness a lineup of beautifully curated silent films made fresh with original scores performed live. 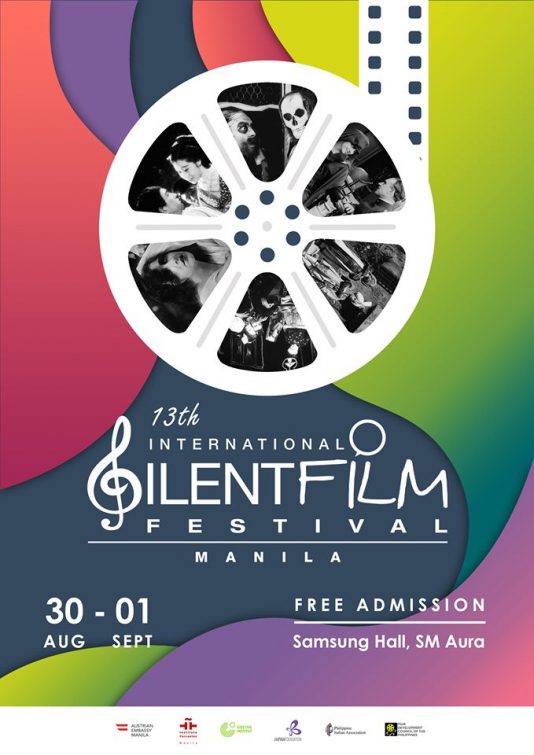 ISFF has become a venue for eclectic musicians to infuse their art into forgotten classics, adding new gradients to black and white films, their flavor to spark new interest in the younger set.

Here is the line up for this year’s festival: 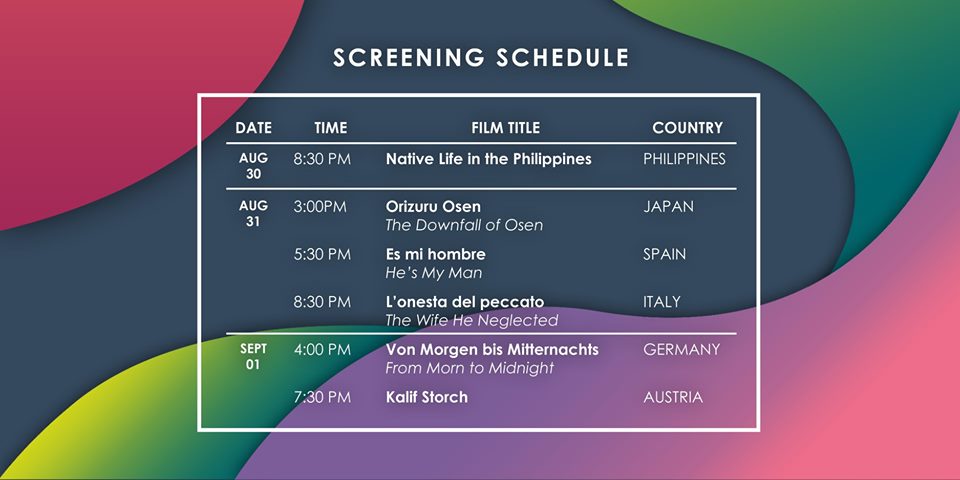 This is a 37-minute documentary about the Kalingas, directed by Dean C. Worcester. The film will be live scored by the local indie band, Munimuni.

The film is by Kenji Mizoguchi and is a story about a beautiful servant girl, Osen, used by her unscrupulous employer, an antique dealer, to help his illegal business. A live musical performance by Kaduma ni Karol will accompany the film.

Directed by Carlo Fernandez Cuenca, the film tells about Don Antonio who, beset by misfortune, must fend for himself and his daughter Leonor, until luck smiles upon him unexpectedly after a series of odd jobs. Tarsius, a Manila-based duo, shall take on the live score for the film.

This film directed by Augusto Genia revolves around the tragic character of Maria d’Alconte played by an intense Maria Jacobini. Her sacrifice restores order and justice in a world weighed by greed and arrogant intellectualism. A collaboration between Stef&No, a sax player and composer from Turin, together with the Pocket Orchestra will provide a fresh score for the film.

The story, which is an adaptation from the Expressionist theater play by George Kaiser, centers on a bank teller who gives in to temptation and steals from a rich old lady. Directed by Karlheinz Martin, the movie, which never saw the light of day in Germany, was thought to be lost. The live score will be played by Anima Tierra, a unique ensemble inspired by traditional world music.

Directed by Hans Berger, this is a film that tells about the misadventures of Caliph Chasid of Bagdad and his Grand Vizier Mansor after they buy magic powder from a wizard. Based on a fairytale by Wilhelm Hauff, the movie is one of the few remaining family-friendly flicks from the Austrian silent film era. Rock band Tanya Markova shall take on scoring duties for this year’s closing film.

All screenings will be open to the public on a first-come, first-served basis.

Check out the aftermovie for last year’s event!

The 12th Silent Film Festival went by quickly! We're looking forward to what's instore for the next one! Meanwhile, here are some clips from last month's event 😊 Thank you to everyone who celebrated film & music with us! See you again next year! 🇵🇭🇮🇹🇩🇪 🇫🇷 🇪🇸🇺🇸🇯🇵 🇦🇹 _________________________________________The International Silent FIlm Festival Manila is a 4-day festival presenting silent films livescored by local musicians. This year, eight (8) countries were represented by the following institutions: The Philippine Italian Association, Film Development Council of the Philippines, Embassy of France to the Philippines and Micronesia, Goethe-Institut Philippinen, The Japan Foundation, Manila, U.S. Embassy in the Philippines, Instituto Cervantes de Manila and Austrian Embassy Manila. Adding to the festival experience, an interactive installation was designed by Micah Pinto & Bene Manaois of Para Sa Sining to exhibit the participating films. #ISFF2018 would not be a success without the contribution and support of our esteemed partners: SM Cinema, SM Cares, Amici PH, Samsung, Sunny16 Lab, Embassy of Italy, ICCPI, Cineteca Bologna, Institut Français, Embassy of Japan, Filmoteca Española, Embassy of Spain, Hearlife Foundation, MEDEL, Fringe Creatives and Barista & Coffee Academy of Asia. Mabuhay ang pelikula!

The festival will also commemorate Philippine cinema’s first centenary, which is a milestone in Southeast Asia. In line with this, Professor Nick Deocampo, author and film historian, will share his extensive knowledge in Asian film making during his lecture on August 31 at 1 p.m.