De Profundis, a Lenten Offering at the Ayala Museum this April 13!

A concert that features a lineup of rarely performed music from the Baroque, Classical and Romantic eras – Cultural Arts Events Organizers (CAEO) presents “De Profundis” (translated as “Out of the depths”) on April 13, 2019, at the Ayala Museum.

The concert commemorates the Lenten Season and presents several of the top young vocalists in the country. Sacred music, including the Philippine premiere of a Bach Cantata, will be featured in the concert. 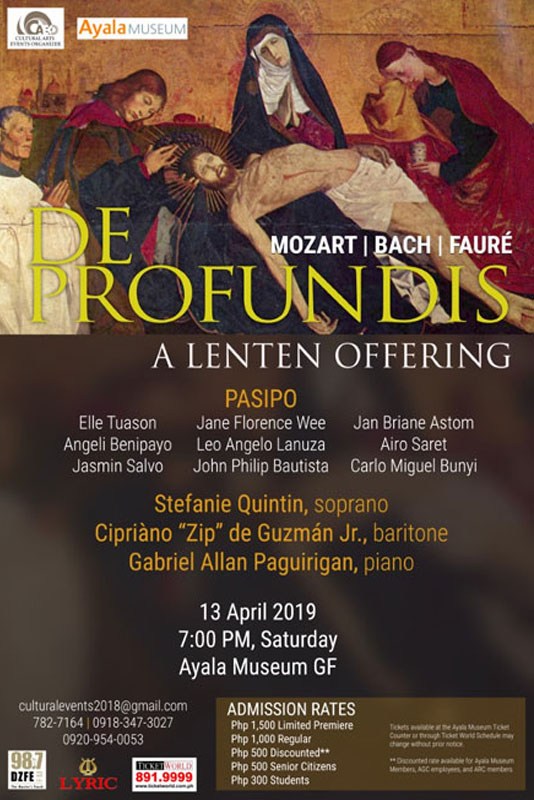 The concert will open with Mozart’s Laudate Dominum from his Vesperae solennes de confessore. The piece will be followed by the Philippine premiere of Bach’s penitential cantata BWV 131 “Aus der Tiefen rufe ich”, the backdrop of which is Psalm 131, “De Profundis” where the concert’s title is taken from.

The program will end with an unabridged performance of Fauré’s Requiem in D minor, Op. 48 – a piece most known for the magnificent “Pie Jesu.”

Also Read: Witness Women in Opera at the Ayala Museum this March 28!

Accompanying the vocalists on the piano is Gabriel Allan Paguirigan, an award-winning chamber artist.