Witness Women in Opera at the Ayala Museum this March 28!

In celebration of International Women’s History Month, Ayala Museum presents “Women in Opera” this coming March 28, 2019, at the museum lobby. The concert offers a glimpse of the psyches of 16 operatic heroines from the works of Verdi Donizetti, Mozart and, Bernstein to name a few. 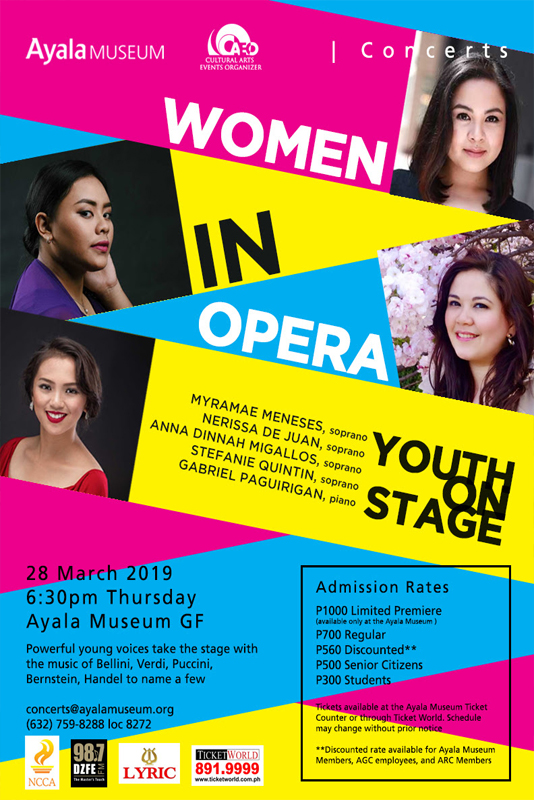 Headlining the concert are four of the country’s top young singers who will essay the 16 heroines. The quartet is headed by Stefanie Quintin, the 2nd prize winner in the Second Asean Vocal Competition’s professional category that was held in Hong Kong. Joining her are Myramae Meneses, a fresh graduate from the prestigious Guildhall School of Music and Drama in London. Anna Migallos, a graduate from the Royal School of Music where her voice was described as “liquid gold” by a number of critics in London.

The quartet is completed with Nerissa de Juan, a student at the University of Sto. Tomas (UST) Conservatory of Music who recently played the role of Maria Clara in Felipe de Leon’s Noli Me Tangere Opera at the Cultural Center of the Philippines.

The quartet will be singing the arias of Lucia from Dinozetti’s Lucia di Lammermoor, Cunegonde in Bernstein’s Candide, Manon in Massanet’s Manon and Donna Elvira in Mozart’s Don Giovanni among others. Joining and assisting them is the multi-awarded pianist, Gabriel Allan Ferros Paguirigan.

Don’t miss out on the opportunity to witness these amazing sopranos tell the stories of some of operas heroines in Ayala Museum’s Youth on Stage: Women in Opera this March 28, 2019, at the Ayala Museum Lobby. Tickets are available in TicketWorld and at the Ayala Museum.

For more information and ticketing inquiries, you may contact the Ayala Museum at 02-759-8288 local 8275. You may also send them an e-mail at concerts@ayalamuseum.org. You may also visit TicketWorld or call 02-891-9999.