The Japan Foundation Manila will hold Japan Film Week this February and March 2019, in celebration of the Philippine National Arts Month.

In partnership with the Film Development Council of the Philipines (FDCP) and Partners’ SPFL-CJH schools, they will offer a series of Japanese film screenings in several regions targeting students and the general public who hardly have access to Japanese films. Admission to the screening is free on a first-come, first-serve basis. 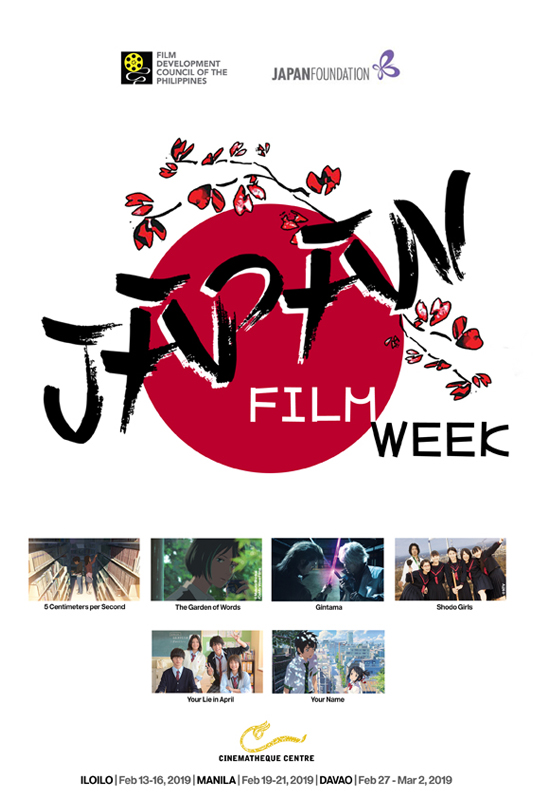 Japan Film Week kicks off with the Japanese jidaigeki film, MUMON: The Land of Stealth at the FDCP Cinematheque Center in Iloilo City on February 13, 2019, at 6:30 p.m.

The film is directed by Yoshihiro Nakamura and based on the novel by Ryō Wada. It’s set in the Sengoku period and focuses on fictional events that surround the Tenshō Iga War.

Completing the film line-up are six more films that will be shown with English subtitles, giving their viewers a chance to experience the film while discovering something new:

Based on the manga series of the same name, Gintama follows the story of Gintoki Sakata, a samurai in a parallel universe set in Japan’s Edo period, which has been conquered by an alien species called Amanto. Gintoki is a freelancer and, along with his friends, accepts jobs in order to make ends meet.

Your Name first premiered in 2016 and has since then become one of the most critically acclaimed Japanese animation films. Its story follows Taki Tachibana, a boy from the city, and Mitsuha Miyamizu, a girl from rural Japan, who swap bodies in this exciting romantic fantasy drama.

This 2007 film is separated into three parts, all centered on the life of Takaki Tono and Akari Shinohara from the time that they met as children to the present. 5 Centimeters per Second carries themes of romance and friendship that will surely tug a heart string or two.

Your Lie in April

Released in 2016, Your Lie in April follows the story of Kousei Arima, a piano prodigy who, after the death of his mother, finds himself unable to “hear” piano notes. Then enters Kaori Miyazono who paved a way for Kousei to return to his interest in music. This slice-of-life film will surely inspire you.

Shodo Girls is set in the town of Shikokuchuo, a town that’s famous for their calligraphy paper. Satoko Hayakawa is the head of her school’s calligraphy club as she and three other schoolgirls revive their depression-hit town by organizing a performance calligraphy competition. The film was inspired by the origin story of the Ehime Prefecture’s Shodo Performance Koshien.

The Garden of Words

An aspiring shoemaker, Takao Akizuki meets a beautiful yet mysterious woman Yukari Yukino on a rainy day in Tokyo. What follows in The Garden of Words is a series of meetings where both of them are able to alleviate each other’s worries just by being with each other. However, as the rainy season comes to an end, their relationship will be put to the test.

The screenings will be held at the following dates and times at screening venues nationwide:

Additionally, screenings will also be held at the following schools/universities:

What are you waiting for? Catch these superb Japanese films only at Japan Film Week happening from February 13 to March 15, 2019!

For inquiries, you may contact The Japan Foundation at 02-811-6155 to 85 or email them at email@jfmo.org.ph. You may also visit their official Facebook page.