Rocking Tradition: A Shamisen Concert with Keisho Ohno This February 12

Listen to the traditional music of Japan incorporated with a rock-band twist as UP Asian Center presents Rocking Tradition: A Shamisen Concert with Keisho Ohno happening on February 12, 2019 at the GT-Toyota Auditorium, UP Asian Center, UP Diliman, Quezon City. 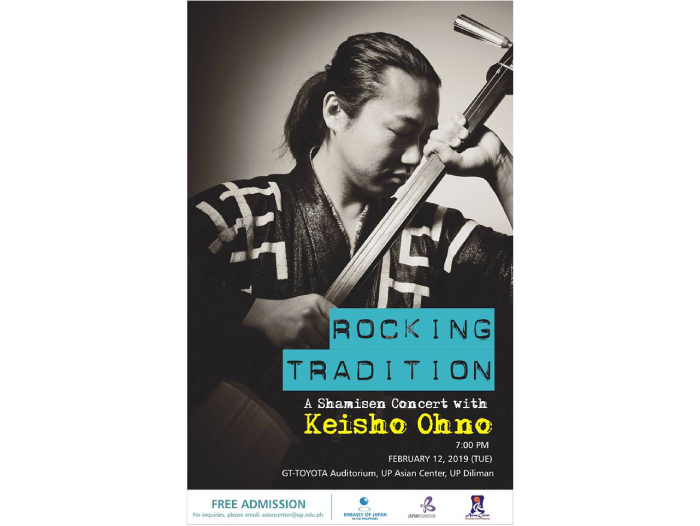 Using the Tsugaru shamisen—a traditional Japanese string instrument, Keisho Ohno will showcase his musical prowess in this one-night performance organized by the UP Asian Center, in cooperation with Japan Foundation Manila and Embassy of Japan in the Philippines.

Keisho is an accredited master of the Tsugaru shamisen at the age of 12 and is known for his high musical technique that challenges the traditional music of shamisen by combining it with rock tunes. He became the first Tsugaru shamisen player that performed at the South by Southwest, the largest music fair in the world in 2006.

Throughout his steady musical career, he has already released five albums, namely the Shamisen-damashii Shami Spirits (2007); Samurai (2008); KAMOME, which also debuted in Europe from a French label in 2011; SPARK (2013); and KEI (2013) featuring traditional shamisen pieces.

The concert seating is in a first come, first served basis. Attendees are encouraged to sign up for the event, however, walk-ins are also welcome.

Also read: For King & Country LIVE in Manila This February 2019

For inquiries, you may email UP Asian Center at asiancenter@up.edu.ph.