Lawson’s lead singer-guitarist, Andy Brown, will perform unaccompanied, as he serenades you on a one-night acoustic concert playing their band’s top-charting hits on March 30, 2019 at the SM Skydome in SM City North EDSA.

The lead singer-guitarist started his solo career, apart from his band, in 2017. During his career with Lawson, Andy along with his band mates booked seven hits in the top 20 UK singles.

That doesn’t stop there as their debut album, Chapman Square, registered to a multi-platinum record worldwide, including the Philippines.

Andy will perform singles from his latest debut album, Cedarmont, with compositions such as “Talk of the Town” and Lay with Me.”

Aside from the songs from his debut album, he will also play top songs from Lawson namely “Learn to Love Again,” “Standing in the Dark,” “When She Was Mine,” “We Are Kings,” “Roads”, and many more. 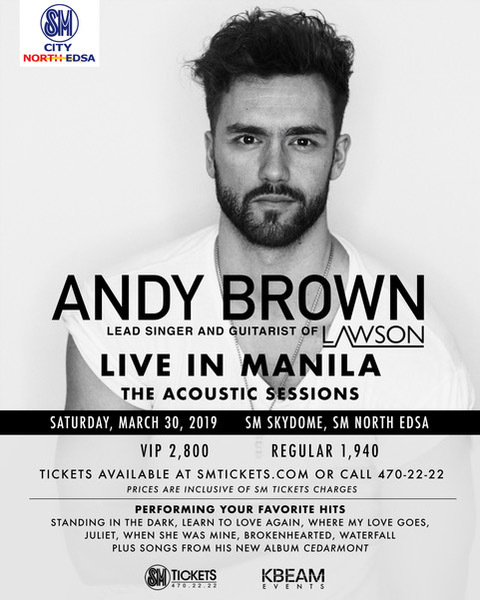 Also read: Party for a Cause at the Syzygy Music Festival on February 9!

You may visit SMtickets for ticket reservation or booking and more information about Andy Brown Solo Concert. You may also inquire via their contact at 02-470-2222.