American Stars Gala: How Stars Aligned to Bring the Finest Together

Who would have thought that the human body is made out of stars?

Authors of Living with the Stars, Karel and Iris Schrijver–one an astrophysicist, the other a professor of pathology respectively– gave a nod to a line in Joni Mitchell’s Woodstock and how factual it actually is. In an article released by the National Geographic in 2015, the line was quoted, “We are stardust.” While Karel’s explanation involved a lot of discussions on hydrogen, oxygen, and a supernova, the bottom line is that the human body, he said, is made out of stars which exploded in space and encountered their timely death.

This year, however, as fate finally revealed the perfect time, stars from Asia and America seemed to have risen and aligned to perform at the Aliw Theater, CCP Complex, Pasay City, this July 7 at 7:30 PM in a once-in-a-lifetime American Stars Gala! 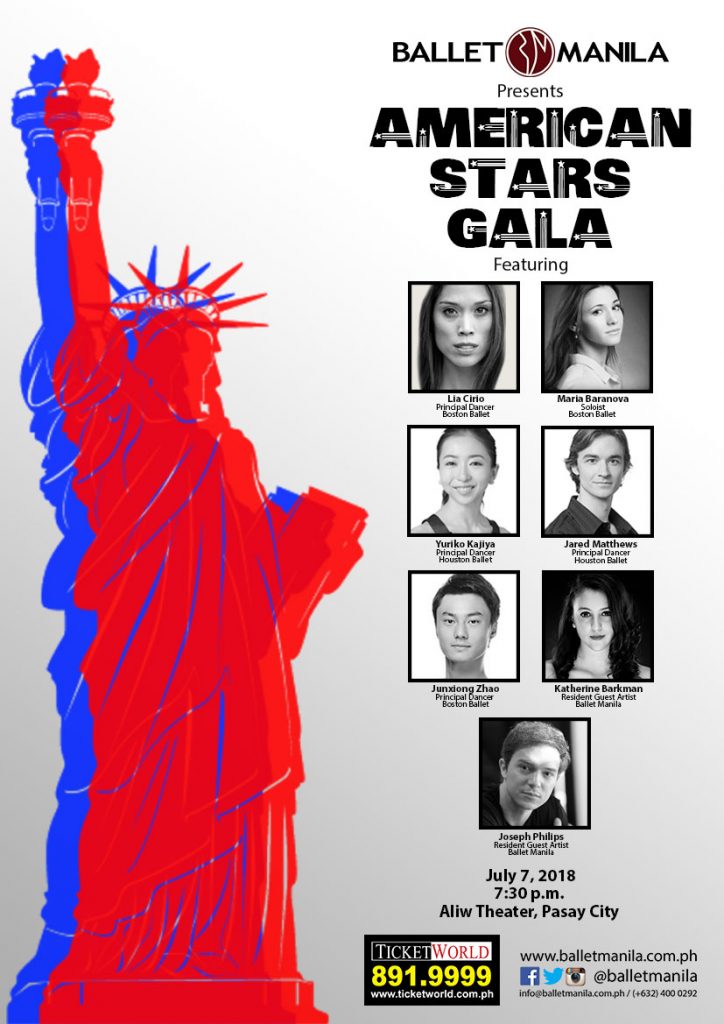 According to ABS-CBN News, Ballet Manila’s lustrous star and Artist Director, Lisa Macuja-Elizalde, orchestrated the event as proposed by George Birkadze. Known for his role as “The Jester” in Swan Lake and for teaching at the Boston Ballet School, Birkadze, who was in the Philippines at that time, gave her the idea as the stars are in the “Asia-Pacific region” all at the same time as if by serendipity. So, why not let the stars cross each other’s paths?

Houston Ballet, on the other hand, presents principal dancers, Jared Matthews, who is well-received for his performance in John Cranko’s “Taming of the Shrew” as Lucentio, and Yuriko Kajiya, who is described by Ballet Manila as a “highly influential force” in both America and Japan.

Finally, second soloist Hannah Bettes from Boston Ballet will also perform, as well as principal dancers, Junxiong Zhao, who won the Choreographic Prize in 2015, and the Filipino-American, accomplished ballerina, Lia Cirio, who won the National Foundation for Advancement of the Arts award at the young age of 16. This convergence of the stars will be headlined by Cirio and Zhao.

American Stars Gala is a fundraising event for Project Ballet Futures (PBF) which equips both elementary and high school students in public schools with free education in ballet. Ticket prices are at Php 500 for the General Admission, Php 1,000 for Deluxe, Php 2,000 for VIP, and Php 3,000 for Premium VIP. For more information, you can visit www.ticketworld.com.ph.