Remember the guy who stood up on a big stage in Seattle and made people laugh out loud with stories of his Filipino upbringing and tales that involved his mom a lot? That same guy who made you crack up on your couch while watching him on Netflix? Yes, that guy called “Josep!” 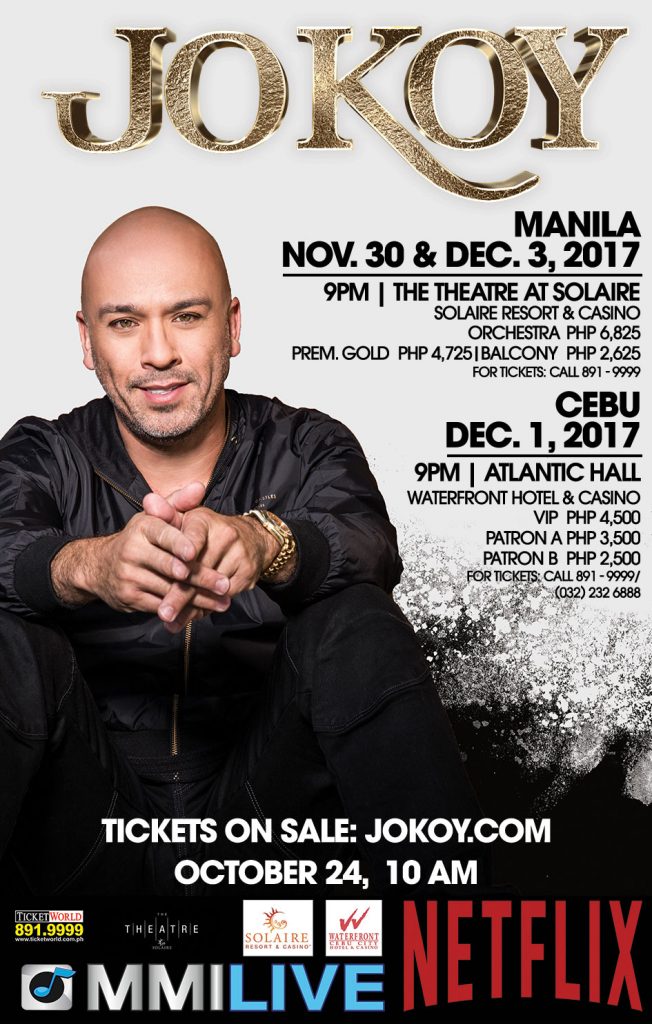 Well, now you will soon have a chance to see Jo Koy, also popularly known as Josep (a mispronunciation of his real name “Joseph”), live on stage as he takes over the Philippine stand-up scene with back-to-back performances at The Theatre at Solaire in Manila (November 30 and December 3) and at the Atlantic Hall of Waterfront Hotel and Casino in Cebu (December 1).

The 46-year-old Filipino-American is an internationally acclaimed stand-up comedian who has been acknowledged as one of the top Asian comedians in the world. He has been doing tours in and outside of the US, and every performance is almost always a box office hit.

For some time, he pursued his career at a comedy club and then in TV shows, until his big break came when he was given a guest spot on “The Tonight Show with Jay Leno” in 2005. That day, he received a standing ovation for his performance.

Another high of his career was when his self-produced comedy special “Jo Koy: Live from Seattle” recently made it to Netflix, letting him reach a wider audience all around the world, including the Philippines.

Ticket selling via TicketWorld will start on October 24, with tickets ranging from Php 2,625 to Php 6,825 (for Manila). A piece of advice: we heard his recent tours in the US, Hawaii and Canada sold out, and we are expecting the same in Manila, so grab your tix fast!

7 sold out shows in Hawaii, adding 1 more. He originally had only 1 show! Dude is hilarious. Congrats @Jokoy https://t.co/uOXVG60frz

Comedian @Jokoy sold out 8 shows in the islands and a bunch of my friends are still like: "I can't get a ticket." How is this even possible?