South Korea’s very own Justin Bieber, Tae Yang will be bringing his White Night World Tour in Manila and will be happening this coming September 22, 2017! 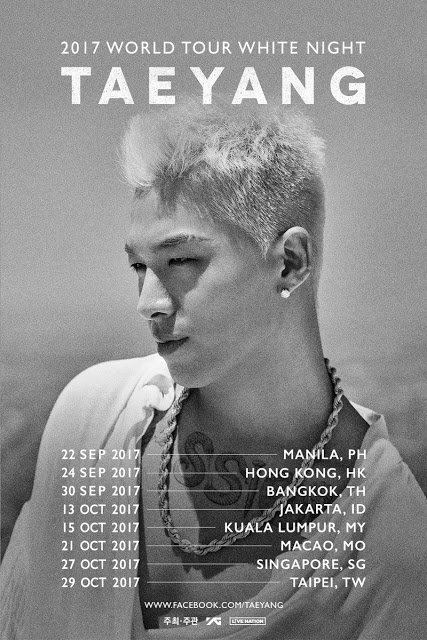 Dong Young Bae, Tae Yang’s real name, pursued a solo career in 2008, releasing his first extended play, Hot. He was given the award for Best R&B & Soul Album at the 6th Korean Music Awards. Taeyang’s music is defined as a mixture of R&B, Soul, and Hip-hop. Labeled as the Korean “Prince of R&B,” Taeyang’s vocal skills have been admired by critics and is cited as one of the best vocalists in South Korea.

Taeyang will be bringing his White Night World Tour here in the country on September 22, 2017 at the Big Dome, Smart Araneta Coliseum, Quezon City, Philippines, making it his very first solo headline show in the Philippines which  will be presented by IME PH in partnership with Live Nation and YG Entertainment. Tickets will be available soon, you may check www.manilaconcertscene.com or www.ygfamily.com for more details.