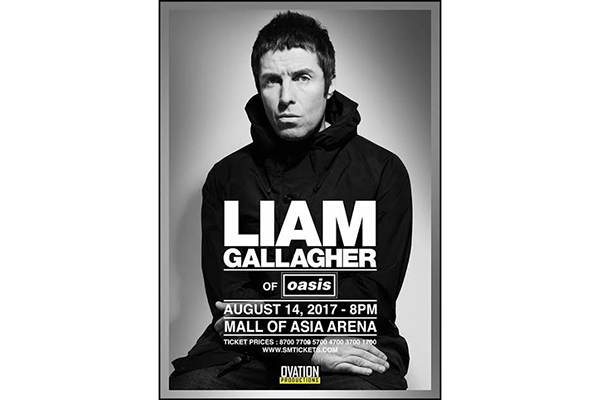 Oasis frontman, Liam Gallagher to perform at the SM Mall of Asia on August 14, 2017.

Liam was voted the greatest frontman of all time in a 2010 reader poll by Q magazine.

Many bands and artists have cited Oasis as an influence or inspiration, including the Killers, Arctic Monkeys, Maroon 5, and Coldplay, among others.

Oasis is a five-piece bandfrom Manchester, England led by Liam and Noel Gallagher, two brothers from public housing, who became the defining musical act for a generation. Noel’s proudly British lyrics; choruses that could make your throat clench and your heart threaten to burst; Liam’s sneering vocals and pissed-off posture; the cocktail of ego, camaraderie, and one-upmanship that made Oasis as entertaining and volatile offstage as on.

Songs such as “Live Forever”, “Lyla”, “Don’t Go Away”, “Slide Away” and “Champagne Supernova are cited as examples of Liam’s best work. He would sing with the microphone coming in the closest contact with him between his upper lip and nose, rather than directly in front of the mouth as is the case with most singers. Gallagher once revealed that the reason he sings with his arms behind his back is because it allows him to project more power through his voice.