Love that jazz this love month as some of the biggest names in Manila’s jazz circuit conquer the Arya Plaza in BGC. The Arya Plaza is a destination dining haven along McKinley Parkway, hosting carefully curated restaurants such as Foundry, Fukudaya, Arroz Ecija, and Basil; and Styluxe Salon and Makeup Studio. 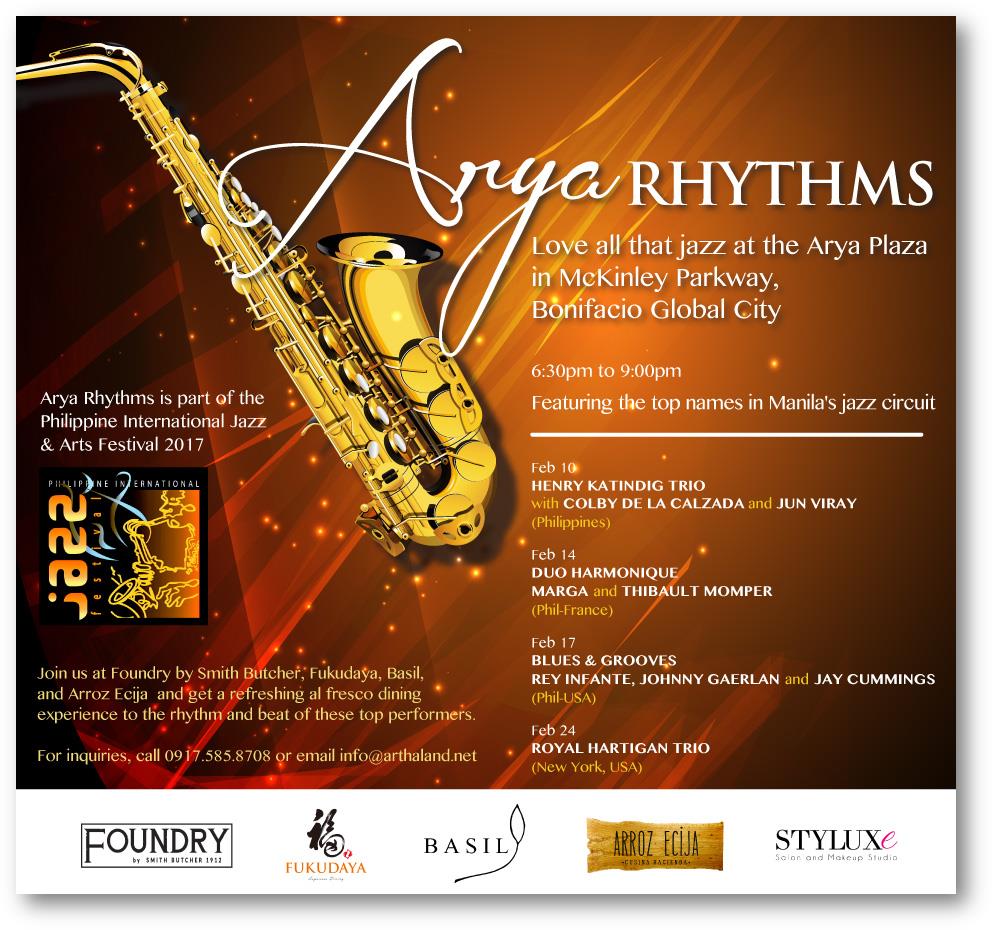 Henry Katindig, a figurehead in the local jazz scene for the past three decades will open the festival on February 10. He is a respected band leader and first-call session artist, and his prodigious style has been immortalized in countless recordings and festivals here and abroad. Henry will share the stage with Colby Calzada and Jun Viray. Colby’s musical experience spans more than three decades. He has played twice in the North Sea Jazz Festival in London and at Billboard Tokyo. Jun Viray is one of the foremost drummers in the Philippines and is co-founder and organizer of the Philippine International Jazz and Arts Festival.

On February 14, the Fil-French Duo Harmonique composed of the musically beautiful couple, Margarita and Thibault Momper, will make your Valentine night even warmer as they play classical guitar tunes. Margarita was one of the founders of Triple Fret guitar ensemble. She attended classes with Tomonori Arai, Alexis Vallejos, David Russel, Lester Demetillo, and other influential guitarists. Thibault completed his degrees in Classical Guitar and Music Theory at the Music Conservatory of Nancy and his post graduate studies at the Music Conservatory of Paris. His resume includes several international prizes including those earned in Italy, England, and France.

It’s all about guitar, bass, and drums on February 17 as Rey Infante, Johnny Gaerlan and Jay Cummings conquer the Arya Plaza with their signature rhythm and beats. Guitarist Rey Infante has performed on international stages from Japan, Indonesia, China, Thailand to Dubai. Bassist Johnny Gaerlan is back in Manila, after 30 years in Singapore, and American drummer Jay Cummings was formerly with Stan Kenton’s band.

February 24 will reverberate with blood drum spirit, bringing a new global vision to music, exploring the world’s greatest traditions through the prism of live jazz performance, with the Royal Hartigan Trio. The ensemble members have lived, played and toured throughout Africa, the Middle East, Europe, the Americas and Asia, including four tours of China as featured ensemble at the renowned Beijing Midi Jazz Festival.

To get to the Arya Plaza from Makati, take McKinley Road straight to McKinley Parkway (just go straight after the first traffic light) where you will have a view of Arya Residences. Turn right at the first corner (Rizal Drive) where you will see the parking entrance to your left. Parking is free for Arya Plaza guests.