The long wait is finally over, Harmonizers! American pop group, Fifth Harmony is heading to Manila for the first time on April 5, 2017 for their 7/27 tour at the SM Mall of Asia Arena. 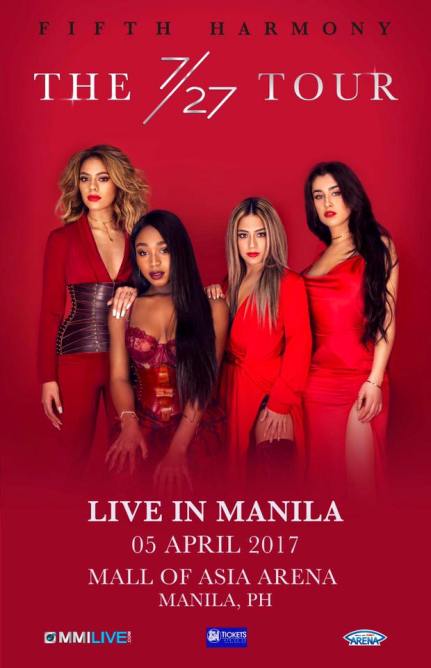 American pop-group, Fifth Harmony is heading to Manila on April 5, 2017 for their 7/27 Tour. Image grabbed from MMI Live

Fans went frenzy and posted their excitement on social media when the leading concert promoter, MMI Live announced the pop group’s upcoming concert on April. The group is composed of Ally Brooke, Normani Kordei, Dinah Jane, Lauren Jauregui , and is famous for their hit songs “Worth It”, “Work From Home”, and “That’s My Girl”.

Formed on the second season of The X-Factor US in 2012, they’ve released their first single “Miss Movin’ On” following their exit, which was a certified gold by the Recording Industry Association of America (RIAA).

In 2015, the group released their debut studio album, Reflection, including their platinum singles, “Boss”, “Sledgehammer”, and “Worth It”, and latter achieved triple platinum certification in the U.S.

Experience a concert from the iconic pop group and it’ll be “Worth It” show  for sure! Tickets on sale will start on January 24, 10 am via smtickets.com

What: Fifth Harmony live in Manila