Celebrate the music of three nations as they take the global stage in TATLO. Hosted by the Ateneo Chamber Singers (ACS), TATLO will be bringing in 2 other renowned choral groups: Singapore Youth Choir (SYC) Ensemble Singers of Singapore and the Gaia Philharmonic Choir of Japan. The event is set to happen on January 14,  2017, Saturday, at The Theater in Solaire. 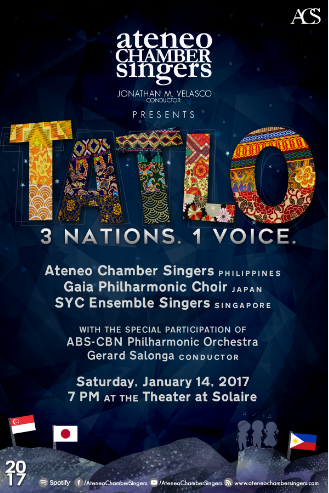 The three choral groups would be doing both spot and joint performances, to show a unified voice formed after fusing the music of the three nations. They will also be joined by ABS-CBN Philharmonic Orchestra and conductor Gerard Salonga. Together, they will be performing Leonard Bernstein’s Chichester Psalms, a masterpiece which showcases both orchestral and choral music.

The Ateneo Chamber Singers  (ACS) is a choral group from Ateneo De Manila University who aspires to bring their university and the Philippines in the forefront of the international choral scene. Together with SYC and the Gaia Philharmonic Choir, they hope to explore and present the music of the three cultures, but still deliver something that would remind its audience of home. To know more about their performers, you may visit their websites:

Where: The Theater in Solaire