Expect dope explosions and fire as BTS returns to Manila!

ARMYs, get those vocal chords ready because BTS is coming back to Manila! 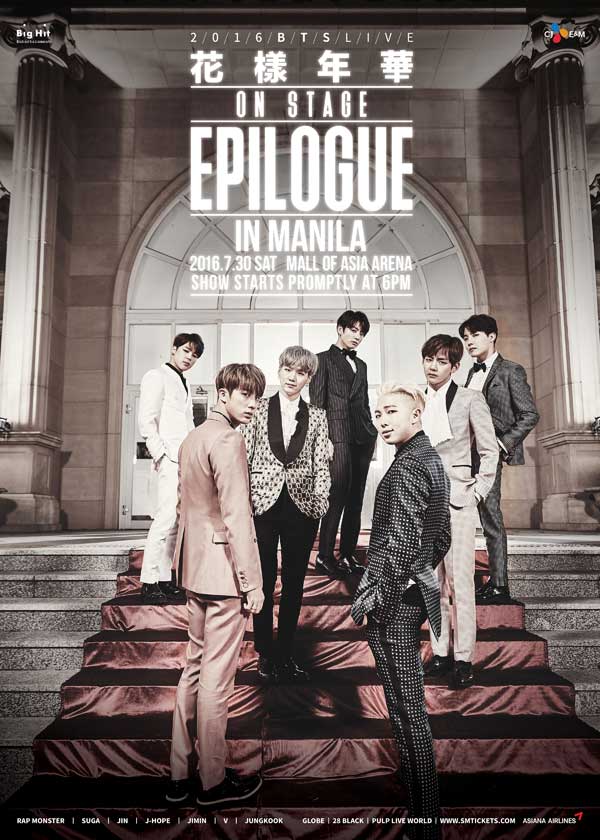 Brought to you by Pulp Live World and Big Hit Entertainment, The On Stage Epilogue will be happening on July 30th at the SM Mall of Asia Arena. The 7 member boy group, consisting of Suga, V, J-Hope, Jungkook, RapMonster, Jimin and Jin, will be returning as a stop of their 2nd world tour. BTS or Bangtan Boys debuted in 2013 and have been making a name in the Korean pop industry for their unique songs, its messages and styles.

Gaining recognition with their EP series The Most Beautiful Moment in Life that featured “I Need U” and “Dope” and their latest compilation album, Young Forever that featured the songs “Fire” and “Save Me” which sold 300,000 copies during its first week pre-sale period, you are sure to expect a lot of swag, explosions, fire and BTS awesomeness. So, prepare those light sticks, memorize those fan chants, plan your pre-concert activities, get those emotions in check and prepare yourselves to see BTS live!

What: On Stage Epilogue: BTS Live in Manila

For more information and ticketing inquiries: