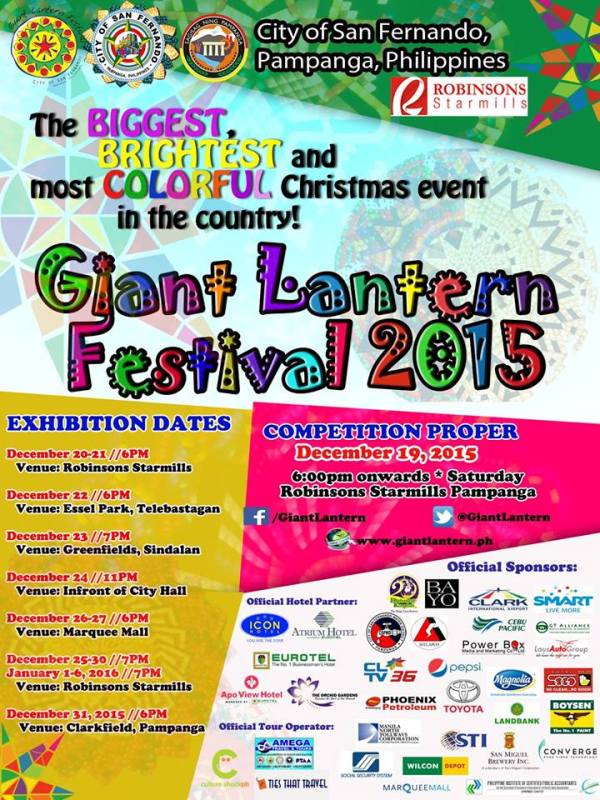 Want to celebrate Christmas the Filipino way? Join the annual Giant Lantern Festival on December 19, 2015 in Robinsons Starmills Pampanga and be amazed by the biggest and brightest event in the Christmas Capital of the Philippines.

The time of the year has come once again for the public to witness this one-of-a-kind festivity. The Giant Lantern Festival is a yuletide event that takes place in the City of San Fernando, Pampanga, about two hours north of Manila. In this occasion, you can see a parade of dazzling multicolored Christmas lanterns turning the streets into a sea of exquisite lights and hues.

The lanterns are made by the competing barangays (town districts) who join and showcase their respective lantern entries. As this has become a tradition in the city, many families have long been trained to be giant lantern makers. There, the craft of lantern-making which started by just using simple materials has evolved into a culture of creating intricate technical and aesthetic showpieces of Filipino ingenuity.

There will be booths at the event venue where you can buy official Giant Lantern Festival merchandise like souvenir items. Aside from the competition, there will be other sights to see such the fireworks display and hot air balloon show in partnership with the Lubao International Hot Air Balloon Festival.