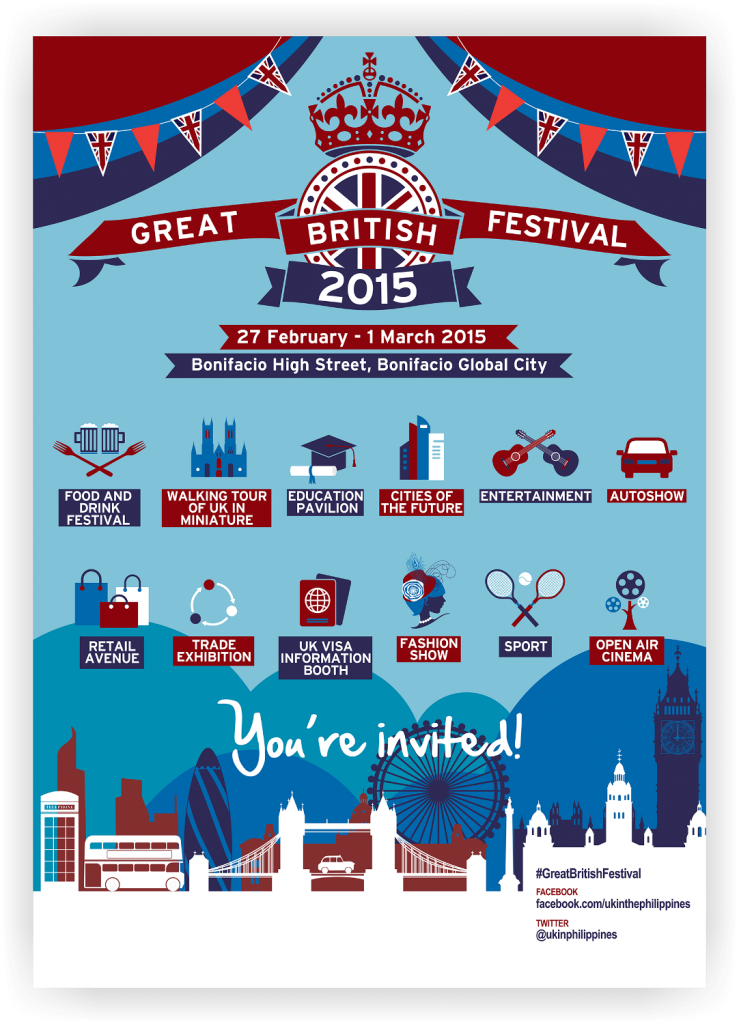 The British Embassy is bringing the Best of Britain back to Manila for another Great weekend with the bigger and better Great British Festival 27 February to 1 March 2015 at the Bonifacio High Street in Bonifacio Global City!
‎
There will be new ways for those attending to get involved and win great prizes. A different show every night will thrill audiences at the ampitheatre – acoustic performances, a fashion show, an orchestra, a cooking demonstration and many more!  Each night of the festival also gives audience members a chance to win prizes ranging from One Direction tickets to roundtrip tickets to the UK.

The festival kicks off with the Great British Rockaoke contest, where aspiring contestants can submit auditions through FaceBook to clinch a spot in the live show and sing their way to winning roundtrip tickets for two to the UK via Etihad Airways.

British Ambassador Asif Ahmad is inviting everyone to join the three-day celebration. “Our GREAT campaign celebrates the growing links between the UK and the Philippines, allowing us to interact and work with more Filipinos. Come join us again at the Great British Festival, there’s something for everyone. Shoppers, fashionistas, foodies, music lovers, film buffs, pop culture fans, car enthusiasts, business executives, students and travellers of all ages will all find suitable activities to enjoy. This is your opportunity to get involved and win great prizes while having fun!”

Enjoy a British-style weekend outdoors with your friends, officemates and family. Shop on Retail Avenue, watch Open Air Cinema, see British-inspired musical performances by the ABSCBN Philharmonic Orchestra and other artists, and taste Great British food and drink. Enjoy taking selfies among replicas of your favourite UK landmarks with a bigger UK in Miniature featuring Stonehenge, Balmoral, Tower Bridge, Houses of Parliament and pop culture icons like the Tardis from Dr Who and the Iron Throne from Game of Thrones. Enjoy the fashion show, trade exhibitions, and a glimpse into the Cities of the Future presented by innovative British companies. If you want to study or go on holiday abroad, visit the UK Visa Information Booth, Tourism Pavilion and the Education Pavilion.

Now on its second year, the festival promises a bigger, better showcase of the unique mix of creativity, innovation, culture, heritage and knowledge that spell Britain’s success in fashion, music, sport, education and design. Admission to the Great British festival is free.