Updated as of March 13, 2020. PPO’s seventh concert for their 37th Concert Season has been canceled in light of the COVID-19 threat.
For the seventh concert in the 37th Concert Season titled “Gold: Classical Music Treasures,” the Philippine Philharmonic Orchestra (PPO) will be performing with renowned pianist, Dr. Raul Sunico on March 13, 2020 at the CCP Main Theater, Pasay City. 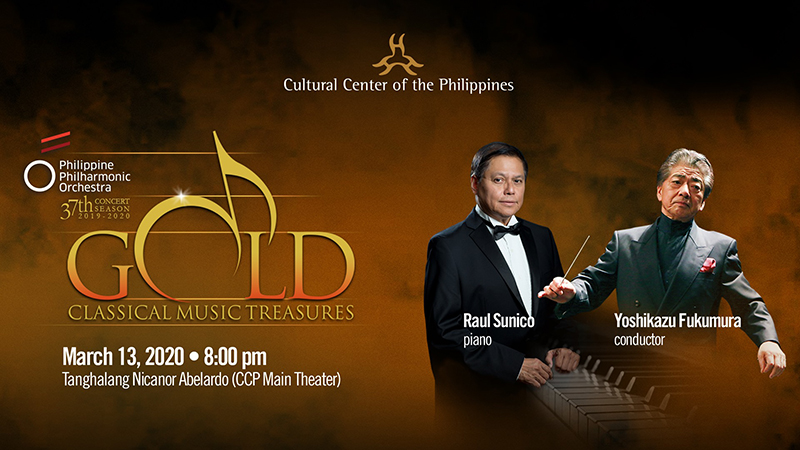 Dr. Raul M. Sunico is a graduate of the University of the Philippines with the degrees of Bachelor of Music, Bachelor of Science in Mathematics, and Master of Statistics. Through a scholarship granted to him by the Young Artists Foundation of the Philippines, he was also able to finish his Master of Music degree at the esteemed Julliard School and Doctor of Philosophy Degree, major in Piano Performance at the New York University.

He was also conferred a Doctor of Humanities degree by the Far Eastern University.

Dr. Raul Sunico will be performing with the Philippine Philharmonic Orchestra under the baton of Maestro Fukumura on the…

He has also been a recipient of many accolades such as The Outstanding Young Men of the Philippines Award for Music in 1986, the 1996 PAMANA Presidental Award for Overseas Filipinos and the Commendatore Award (Order of the Star of Italy) in 2017 by the President of the Republic of Italy.

Witness a night of musical mastery as the Philippine Philharmonic Orchestra performs the seventh concert in their 37th season with Dr. Raul Sunico. Tickets are available at TicketWorld Online and TicketWorld outlets nationwide starting at Php 309.

For more information, you may visit the Cultural Center of the Philippines’ official website and Facebook page. For ticketing concerns, you may visit TicketWorld Online or call them at 02-8891-9999.