Stereolab to Perform Reunion Show in Manila This March

Bring in the old-school vibes as 90s avant-pop band Stereolab comes to the Philippines this March 13, 2020, for a reunion show. Happening at the Samsung Hall, SM Aura Premier, the show will reunite the band after a 10-year hiatus.

Fresh off touring around the globe with phenomenal shows in North America and Europe, Stereolab guarantees that they’ll give their fans in Manila a performance they won’t forget. 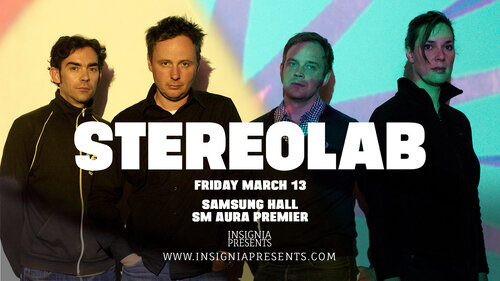 First formed in 1990 in London, Stereolab, led by its team of songwriters Tim Gane and Lætitia Sadier, has a unique sound that draws influence from krautrock, lounge, and 1960s pop music as well as funk, jazz, and Brazilian music. With this, they are considered as one of the most innovative and influential groups of the 1990s.

The band has released a total of 10 albums and seven compilation albums before taking a hiatus back in 2010. Some of their top hits include Brakhage, French Disko, and Metronomic Underground.

Their songs can be described as “politically and philosophically-charged” due to the lyrics that tackle topics like war and the government. They also reference other avant-garde groups and artists—a great example of which is their song Brakhage, named after experimental filmmaker Stan Brakhage.

Despite being from the yesteryears, Stereolab’s music is known for inducing easy listening elements in their sound that millennials and music lovers of today find amusing.

Don’t miss the chance to witness one of London’s underground music’s best. Tickets are now available at any SM Tickets outlets nationwide or online at smtickets.com for Php 3,500.

For more information, visit Insignia Presents’ website and make sure to follow all their social media pages.