You can expect the unexpected at this tour that has gone to five continents and has had over 125 shows. To make things more exciting as Brightman takes you to a world of enchantment, the soprano partnered up with Swarovski for her elaborate costumes and dazzling tiaras. 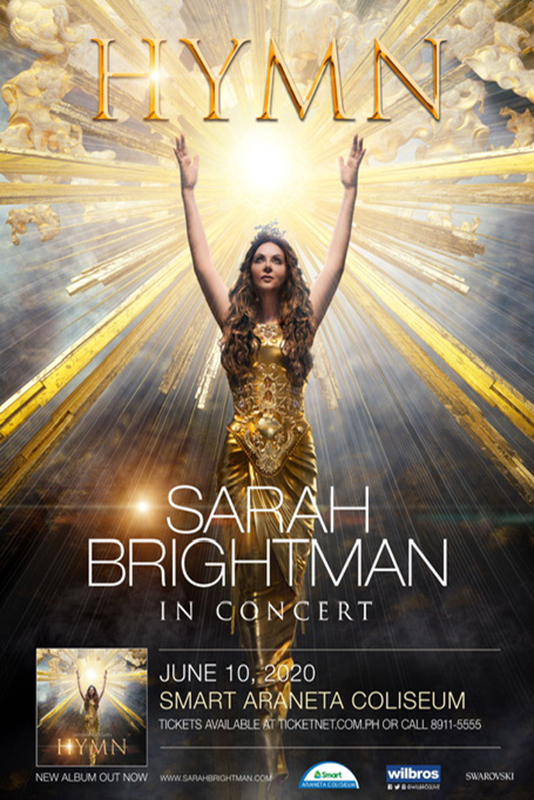 HYMN is Brightman’s 15th full-length album that was released in 2018. The spiritually themed album is a collection of orchestrated, choir-based songs that was recorded in Hamburg, Miami, London, Vancouver, Los Angeles, New York, and Budapest.

HYMN’s mystical tone is set with its title track and encompasses songs by modern composers including Yoshiki, Eric Whitacre, and Paul Kalkbrenner. The album closes with a new rendition of Brightman’s duet with Andrea Bocelli titled “Time To Say Goodbye”. The song features English lyrics that Brightman wrote and sung for herself.

Sarah Brightman is known for her three-octave range and for being a pioneer of the classical-crossover music movement. She is the only artist to simultaneously top Billboard’s dance and classical music charts.

Brightman is most known for her appearances in musicals such as The Phantom of the Opera where she played the role of Christine Daae in the original London production. She’s also appeared in musicals such as CATS, Aspects of Love, and Masquerade and starred in the operetta’s The Pirates of Penzance and The Merry Widow.

In addition, she has also performed in prestigious events such as the 2007 Concert for Diana, the 1992 Olympic Games in Barcelona, and the 2007 Beijing Olympic Games.

Catch Sarah Brightman in Manila for HYMN in Concert this June 10, 2020, at the Smart Araneta Coliseum, Quezon City. Ticket selling will begin on February 1, 2020 at 10 a.m. and will be available at Ticketnet outlets and online.

This is a press release. Edits were made prior to publishing.
Images courtesy of Wilbros Live