German Rock Band Scorpions Is Performing in Manila This March

Get ready to sing along with timeless rock ballads as German rock legends Scorpions grace the Manila stage on March 7, 2020 at Mall of Asia Arena, Pasay City as part of their Crazy World Tour. 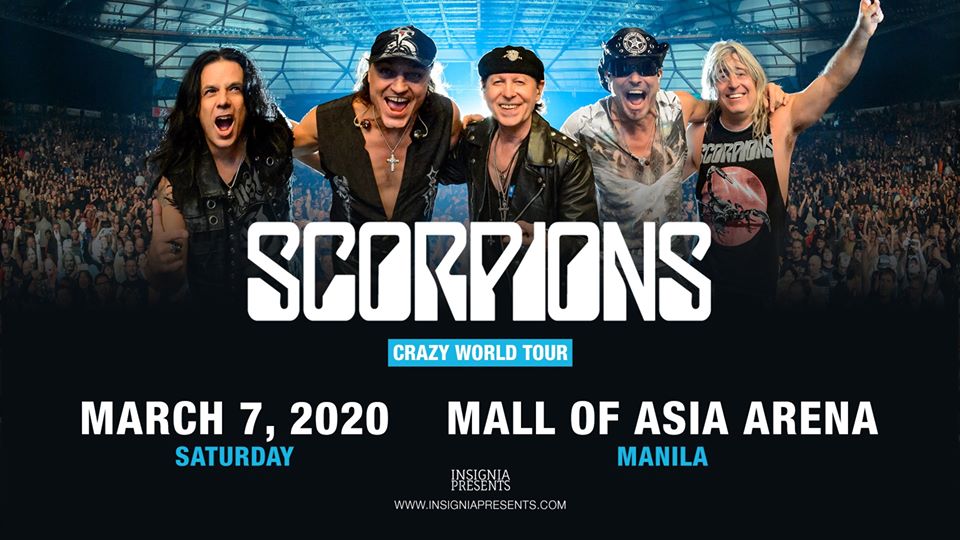 Comprised of Rudolf Schenker on rhythm guitar, Klaus Meine on vocals, Matthias Jabs on lead guitar, Pawel Maciwoda on bass, and Mikkey Dee on drums, classic rock band is best known for their 1984 anthem “Rock You Like a Hurricane” and other chart-topping hits including 1990 ballad “Wind of Change,” “Send Me An Angel,” and “Still Loving You.”

Scorpions is deemed as one of the most successful bands in Europe, selling over 100 million records. In fact, the band has sold more than one million copies of the “Crazy World” album alone. They gained numerous recognitions such as a World Music Award, a postage stamp in Brazil, their Star on Hollywood Rock Walk, Echo honors and the Lower Saxon State Award.

In line with their 50th-anniversary celebration last 2015, Scorpions released their 19th studio album titled Return to Forever with single tracks “Going out with a Bang,” “We Built This House,” “Rock My Car,” and “House of Cards.”

Tickets for Scorpions Crazy World Tour in Manila go on sale on January 31 at all SM Tickets outlets nationwide and online at smtickets.com. Prices start at Php 2,500 for Upper Box B to Php 5,500 for VIP Standing.

You surely don’t want to miss this opportunity to witness one of the greatest classic rock bands live!

What: Scorpions Crazy World Tour 2020
Where: Mall of Asia Arena, Pasay City
When: March 7, 2020
Ticket Information: Tickets will be available on January 31, 2020 at SM Tickets website