Billie Eilish Brings ‘Where Do We Go?’ World Tour to PH in September

One of the most anticipated concerts this year is happening this September as global artist Billie Eilish takes her Where Do We Go? World Tour to Manila!

Happening on September 5, 2020 at the Mall of Asia Arena in Pasay, the 18-year old is set to take the stage by storm with her contagious energy and beautiful voice that have captivated millions across the world. 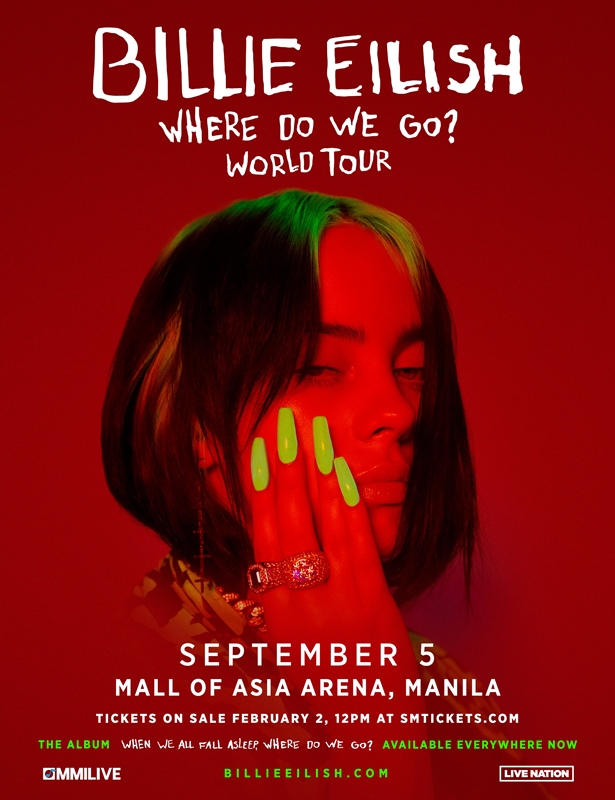 The then 14-year old Billie was first discovered after going viral on music streaming site SoundCloud where she uploaded her first song “Ocean Eyes.” One can only say that after that, the rest was history.

With the release of her first EP titled Don’t Smile at Me in 2017, Billie was catapulted to stardom, earning accolades and awards as she goes. While all of the EP’s singles are notable, “Bellyache” and “idontwannabeyouanymore” are our best picks.

Her success continued with the release of her first studio album last year called When We All Fall Asleep, Where Do We Go?, which was nominated for Album of the Year and Best Pop Vocal Album in the GRAMMYs and was certified double platinum in the US and other countries.

Perhaps the biggest song out of the album’s tracklist is “bad guy”. Aside from garnering three GRAMMY nominations, the pop-trap earworm also reached number one in the Billboard Hot 100, notably dethroning Lil Nas X’s Old Town Road, which held the first spot in the charts for 19 weeks.

There is no denying that there is a handful of great female artists in the pop scene today. What sets Billie apart, however, is her unique style that blends and bends genres. Plus the fact that she’s also just painfully real and genuine adds to her charm.

Billie Eilish’s Where Do We Go? Tour Live in Manila is presented by MMI Live and Live Nation. She will also be performing in Seoul, Shanghai, Taipei, Hong Kong, Tokyo and Jakarta as part of her tour’s Asian leg.

Tickets for the Manila show will be on sale starting on February 2 at 12 p.m. at all SM Tickets outlets nationwide and online via smtickets.com.

What: Billie Eilish’s Where Do We Go? Tour Live in Manila
Where: Mall of Asia Arena, J.W. Diokno Blvd, Pasay City
When: September 5, 2020
Ticket information: Tickets will go on sale on February 2, 12 p.m. at all SM Tickets outlets smtickets.com
Website: mmilive.com
Facebook: facebook.com/mmilive