Updated as of February 6, 2020. The event has been canceled in light of the 2019-nCoV situation. Netflix has released an announcement on the cancellation on their official Facebook page as well as a message from Lana Condor and Noah Centineo.

Gear up for an unforgettable Valentine’s Day as the stars of Netflix’s To All the Boys films—Lana Condor and Noah Centineo will be visiting the Philippines to show their love for their fans.

Happening on February 15, 2020, at the Glorietta Activity Center, Makati City, the #TATBPhilippines fan event also celebrates the release of To All The Boys: PS I Still Love You on Netflix. 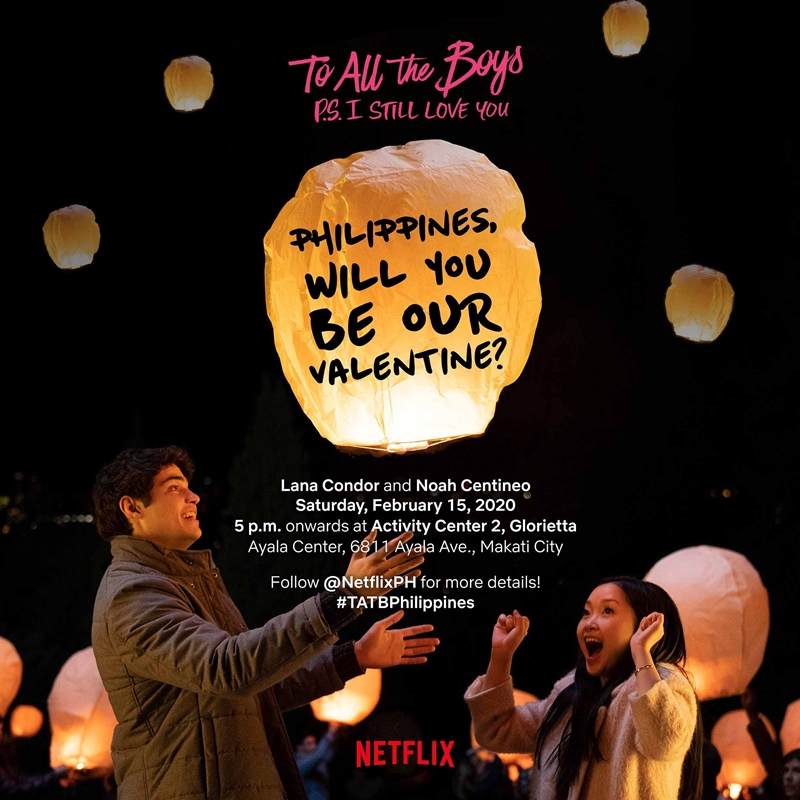 To All The Boys: PS I Still Love You launches on February 12 on Netflix. The film chronicles the relationship of Lara Jean (played by Condor) and Peter (played by Centineo) as they navigate through their official firsts as a couple.

Lara also finds herself learning more on Kitty and Margot (played by Anna Cathcart and Janel Parish, respectively), Chris (played by Madeleine Arthur), and even finds an unexpected new confidant in Stormy (played by Holland Taylor) to help her manage the wave of emotions that come with balancing her relationship and finding her authentic self.

However, a recipient of one of Lara’s old love letters—John Ambrose (played by Jordan Fisher), enters her life again and she must trust in herself more than ever as she is confronted with her first real dilemma: Can a girl be in love with two boys at once?

To All The Boys: P.S. I Still Love You – Main Trailer

Cause of death: TOO MUCH FREAKIN' KILIG. The trailer for To All The Boys: P.S. I Still Love You is here!

Directed by Michael Fimognari, To All The Boys: PS I Still Love You is based on Jenny Han‘s #1 New York Times best-selling young-adult romance novel of the same name.

Entry to the event will be on a first-come, first-serve basis. The event will take place from 5 p.m. onwards.

This is a press release. Edits were made prior to publishing.
Images courtesy of Netflix Philippines.