Updated as of March 19, 2020. Tori Kelly ‘Inspired by True Events Tour’ Live in Manila has been canceled on the advice of authorities on COVID-19. For details on full ticket refund, check MMI Live’s Facebook page.

Singer-songwriter Tori Kelly is coming to Manila for the first time as part of her Inspired by True Events Tour. Happening on April 20, 2020 at the New Frontier Theater, Quezon City, the two-time GRAMMY Award winner will surely put on a show her fans will not forget! 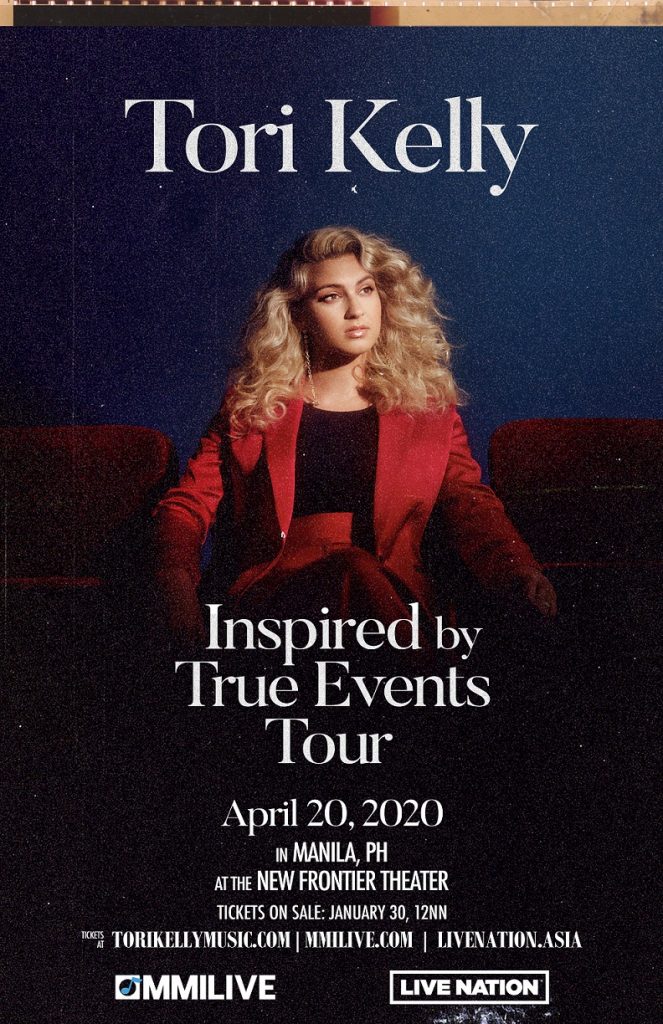 Fun fact: Tori’s Filipino fans called Toraays did a petition for this long-waited concert, demanding that the Philippines should be one of here stops for her upcoming world tour.

It is indeed a dream come true for the Toraays as Tori also released her third album “Inspired by True Events,” and will be performing her singles Change Your Mind and Sorry Would Go A Long Way at the Manila stage.

The gospel RnB singer first had her name trending through her videos on YouTube before becoming a semi-finalist in the 9th season of American Idol in 2010.

Her first debut studio album “Unbreakable Smile” was released in 2015, and peaked at number two on the Billboard 200 chart in the United States with its lead single, Nobody Love. Her voice also made it to the big screen as she voiced the character of Meena in the animated film Sing!

With a nomination for Best New Artist and two GRAMMYs under her belt for her album “Hiding Place,” which won for Best Gospel Album and Best Gospel Performance/Song, Tori is truly one of the standouts in her genre.

Tori Kelly Inspired by True Events Tour Live in Manila is presented by MMI Live and Live Nation. Tickets for the show will officially be on sale on January 30 starting from Php 1,000 for Balcony 2 seats to Php 4,250 for Gold.

For the latest updates and announcements, be sure to check out MMI Live’s website as well as their social media pages.

What: Tori Kelly Inspired by True Events Tour Live in Manila
Where: New Frontier Theater, Araneta City, Quezon City
When: April 20, 2020
Ticket information: Tickets will be on sale on January 30