This summer, prepare for a storm as the Japanese rock band One OK Rock returns to the Philippines with their Eye of the Storm tour.

Happening on May 2, 2020, at the Smart Araneta Coliseum, Quezon City—fans will surely have an unforgettable night with this well-loved band! 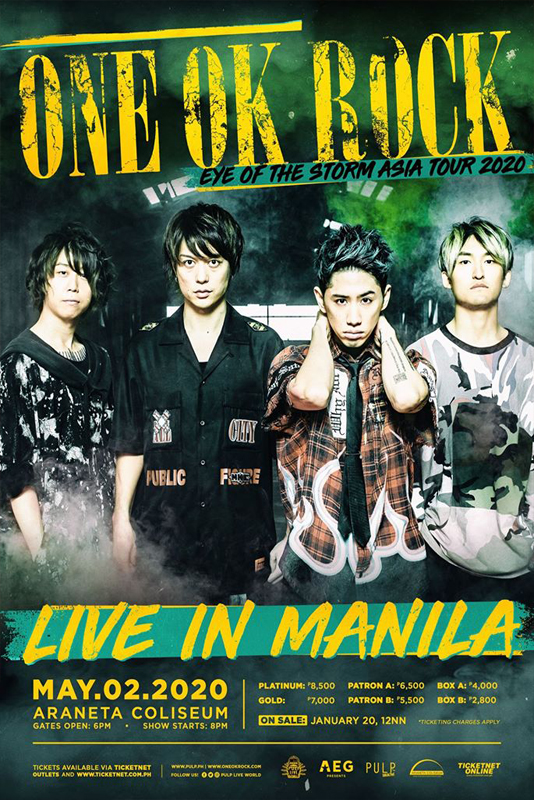 The concert’s title comes from the band’s ninth studio album of the same name that was released in 2019. The album debuted at the No. 1 spot in the Japanese Oricon Album Charts.

One OK Rock is a four-member band composed of Takahiro “Taka” Moriuchi (vocalist), Toru Yamashita (guitarist, bandleader), Ryota Kohama (bassist), and Tomoya Kanki (drummer). They are known for their variety of music styles that ranges from alternative rock, emo, post-hardcore, and pop-rock.

The band was originally formed in 2005 but officially debuted in 2007. They entered the music scene with the single “Naihi Shinsho”, which sold 15,000 copies and reached the No. 48 in the Oricon Charts.

In 2014, One OK Rock reached international success with the release of their song “Mighty Long Fall”, the theme song for the movie Rurouni Kenshin: Densetsu no Saigo-hen. They also held South American and European tours in the same year.

Since then, the band continued to grow internationally and perform with bands such as Ghost Town, All Time Low, 5 Seconds of Summer, and Sleeping with Sirens among others.

One OK Rock has also won awards such as the Eastern Breakthrough Male Band in the Classic Rock Roll of Honour Awards in 2016 and Best International Band in the 2017 Rock Sound Awards.

Manila is the band’s third stop in their Eye of the Storm Asian Tour. They will also be making stops in Singapore, Jakarta, and Hong Kong before wrapping up the tour in Taipei.

Ticket-selling will start on January 20, 2020, at 12 p.m. at Ticketnet online and Ticketnet outlets nationwide. Prices start at Php 2,800 for the Box B ticket category. 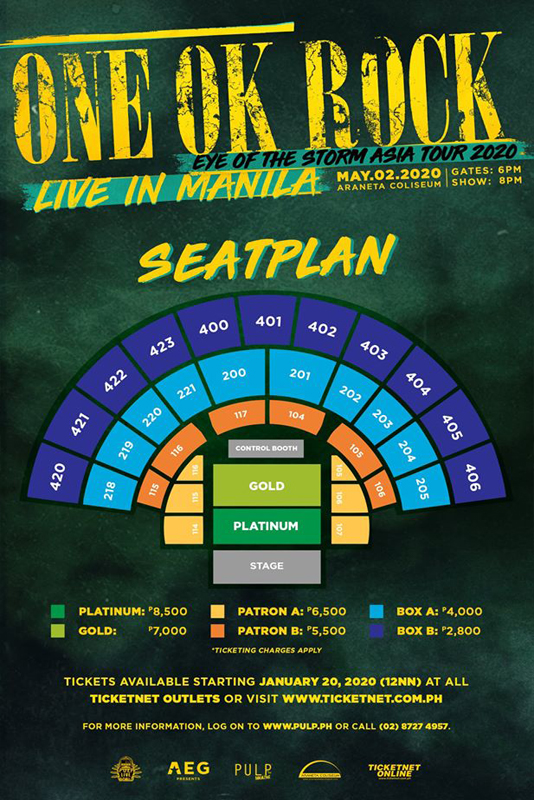 For more information, you may visit PULP Live World’s official website and Facebook page. For ticketing concerns, you may visit Ticketnet Online or call 02-8-911-5555.

What: One Ok Rock “Eye of the Storm” Tour in Manila
Where: Smart Araneta Coliseum, General Roxas Ave., Cubao, Quezon City1
When: May 2, 2020 (Gates will open at 6 p.m. and the show will start at 8 p.m.)
Ticket information: Ticket-selling will start on January 20, 2020, at 12 p.m. Tickets will be available via Ticketnet Online and outlets nationwide.