International Theater Diva and Philippines’ Pride Rachelle Ann Go is all set to make your Valentine’s Day extra special as she conquers the concert stage anew. 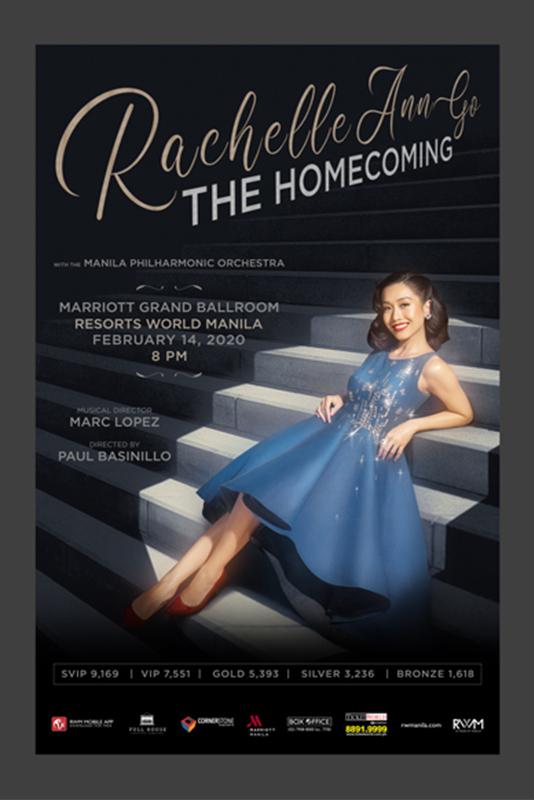 Fresh from the West End production of critically acclaimed musical Hamilton, Go is bringing home her Broadway and West End experience in Manila for a one-night concert you shouldn’t miss.

Go will share the stage with the Manila Philharmonic Orchestra and more exciting special guests.

The Filipina singer started her career in 2003 after she won as the grand champion in GMA’s talent search program Search for a Star.  She then released her self-titled debut album carrying the singles “Love of My Life” and a remake of Melissa Manchester’s “Don’t Cry Out Loud”.

EXCLUSIVE!!!International Musical Theater Star Rachelle Ann Go was specially invited to perform at the 2019 World Food Prize Laureate Award Ceremony, held in the magnificent Iowa State Capitol Building in Des Moines on October 17, 2019. The ceremony was broadcast live statewide on Iowa Public Television. Despite losing her voice just days before the ceremony, Rachelle Ann Go was able to push through and give an amazing performance. She first sang a Tagalog song, "Bayan Ko", gave her thanks, and then sang a Broadway Medley ("I Dreamed a Dream, "On My Own", "The Movie in My Mind", and "Defying Gravity"). She concluded her performance by singing "Rise Up" and received a standing ovation and extended applause.The ceremony rivals that of the Nobel Prize, drawing over 800 people from more than 75 countries. Each year, world-class performers take the stage to honor the World Food Prize Laureate. Past performers have included Ray Charles, John Denver, Chachi Tadesse, and Kathak Gunjan.The 2019 prize was awarded to Simon N. Groot of the Netherlands for his transformative role in empowering millions of smallholder farmers to earn greater incomes through enhanced vegetable production, benefitting hundreds of millions of consumers with greater access to nutritious vegetables for healthy dietsWatch the full video of the ceremony here: https://www.youtube.com/watch?v=M1Rl5VbHcUoFor more information on The World Food Prize, visit: https://www.worldfoodprize.org/*** SHARE ***

In 2011, she made her debut in musical theatre after taking the role of Ariel in The Little Mermaid, in which she won Best Actress at Broadway World Philippine Awards.

Soon after, Go was chosen to play the role of Gigi Van Tranh in the 2014 West End revival of Miss Saigon in London, wherein she sang one of the show’s most notable songs titled “The Movie In My Mind.”

She was then selected as the new Fantine for the 30th anniversary staging of Les Misérables at the Queen’s Theatre in London in 2015.

Currently, Go is playing the role of Elizabeth Schuyler Hamilton in West End’s production of Hamilton in London and will be reprising her role in Les Miserables.

Brought by Resorts World Manila and Cornerstone Concerts, Rachelle Ann Go: The Homecoming concert will be directed by Paul Basinilio with musical direction by Marc Lopez.

Tickets are now on sale at Ticketworld outlets nationwide and online with prices starting from Php 1,618 for Bronze to Php 9,169 for SVIP.

For more information, you may call Resorts World Manila at 02-7908-8888 or visit their website at rwmanila.com and Facebook page.