Travel back in time as one of pop music’s greatest vocalists Tony Hadley serenades you live on February 19, 2020, at the New Frontier Theater in Quezon City! 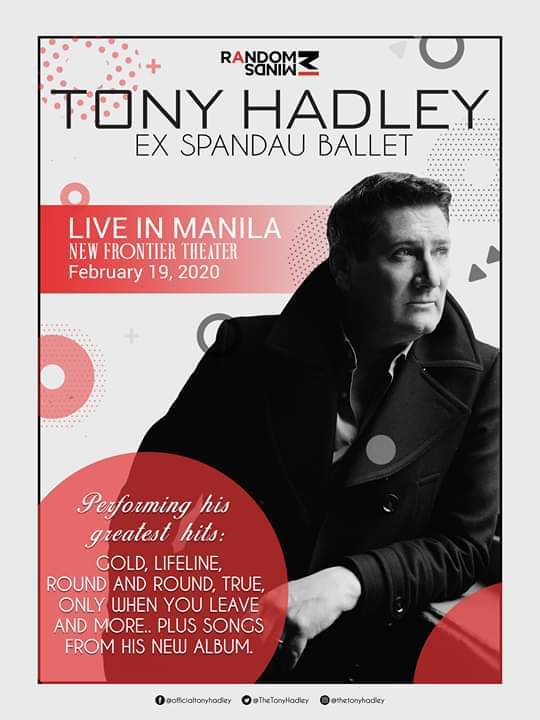 Before becoming a successful solo artist, Hadley was the frontman of the 80s romantic band Spandau Ballet.

They had numerous chart-topping singles and albums all over the world, including “Through the Barricades,” the international hit “True,” and who could forget  “Gold,” which was considered as the unofficial London Olympics theme.

The band sadly parted ways in 1990 but reunited twice and even got a critically acclaimed rockumentary film “Soulboys of the Western World” out of the spectacle.

Hadley continued his career as a solo artist, touring across the world with his band, swing bands, and orchestras. Aside from performing and writing music, he also starred as Billy Flynn in Chicago on the West End stage. He had a stint in the jungle on the reality show I’m A Celebrity and hosts a weekly radio program as well.

On top of that, Hadley was given a Gold Badge from the British Academy of Composers and Songwriters and had the privilege to visit the Buckingham Palace to meet the Queen.

His highly anticipated solo album called Talking to the Moon was released last year with its lead single “Tonight Belongs To Us.” Expect to hear a medley of classics and fresh hits in his upcoming performance in Manila!

Tickets are available at Ticketnet outlets and online at ticketnet.com.ph starting at Php 2,550 for Balcony. Buy now and get 15% off for VIP and 10% for Orchestra seats until December 31!

Tony Hadley Live in Manila is produced by RandomMinds.