Sones and Young Ones rejoice! Global sensation Tiffany Young is set to have her first solo concert in the Philippines on January 25, 2020, at the New Frontier Theater, Quezon City! 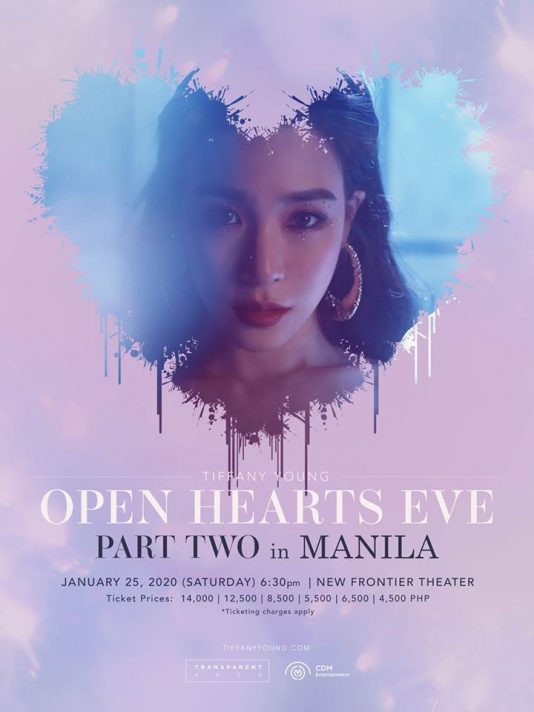 Tiffany is known as a former member of the South Korean girl group Girls Generation and its subgroup TTS. She started her career as a solo artist in May 2016 with her debut extended play titled I Just Wanna Dance.

In 2019, two years after moving back to Los Angeles to further fulfill her solo singing career, she released her U.S. debut album Over My Skin under Paradigm Talent Agency.

Tiffany last visited Manila in 2015 with the Girls’ Generation for the Best of the Best in the Philippines concert with other South Korean groups such as Red Velvet and Super Junior. Her Filipino fans will surely be delighted to see her live again after coming out of an indefinite hiatus!

Tickets will go on sale on December 28, 12 p.m. at all TicketNet outlets nationwide and online. Be sure to hurry as MVP ticket holders get a chance to be in a group photo with Tiffany (Php 14,000) or be part of the send-off (Php 12,500)!

This event is presented by Transparent Arts and promoted by CDM Entertainment.

For more information, visit CDM Entertainment’s Facebook page or send them an email at cdmentph@gmail.com.

All ticket categories have an inclusion of souvenirs and official posters. MVP, VIP A and B, and Lofe ticket holders also get a chance to win a Tiffany Young signed poster.
Website: cdmentertainment.ph
Facebook: facebook.com/cdmentph