Silverstein Returns to Manila for 20th Anniversary This January

Hold onto your seats and get ready to rock as Canadian rock band Silverstein makes their way back to Manila to celebrate their 20th anniversary on January 12, 2020, at the SM Sky Dome, SM City North EDSA in Quezon City! 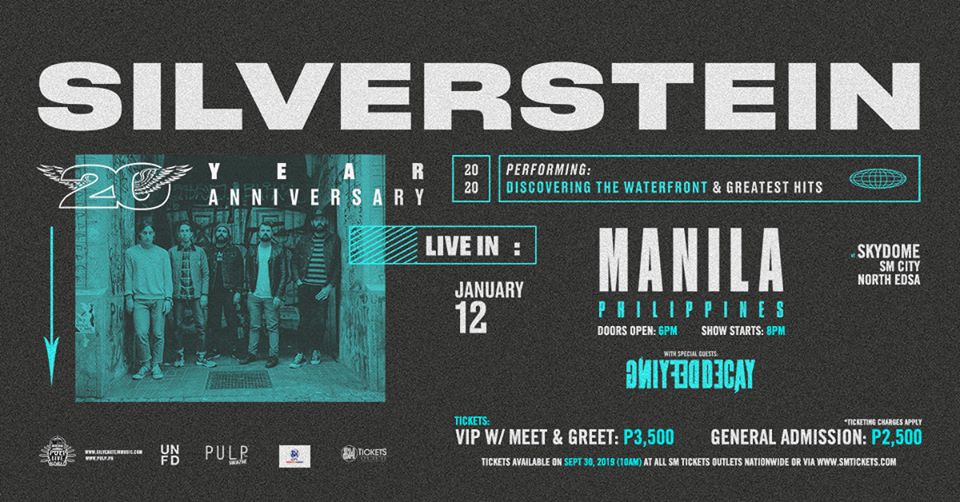 Paul Koehler, Josh Bradford, Billy Hamilton, Shane Told, and Paul Marc Rousseau are set to return to Manila to perform hits from their breakthrough album Discovering the Waterfront such as “My Heroine”, “Smile In Your Sleep”, “Retrograde” and more.

Silverstein debuted at Burlington Ontario two decades ago with their name inspired by famous children’s author Shel Silverstein. The band hit it hard especially after the release of their second album, Discovering the Waterfront, which was highly-acclaimed and is considered as one of their classics.

Nine studio albums and numerous career-defining moments later, Silverstein has become one of the top names in the emo/post-hardcore scene and is among the longest-reigning bands in the genre. Their upcoming 20th-year celebration is surely one for the books.

Tickets for the show are now on sale and available at all SM Tickets outlets nationwide and at www.smtickets.com starting at Php 2,500 for General Admission.

They will be bringing with them Thai alternative metal band Defying Decay for a night of performances worth remembering!