The Embassies of Austria, Denmark, Germany, the Netherlands, and Sweden, with the support of the United Nations Development Program and the Film Development Council of the Philippines, presents the Today is Our Future: The First SDG Documentary Film Festival.

The festival will be held at the University of Sto. Thomas, Manila from December 2 to 5, 2019, and at the Gateway Cineplex Cinema 4, Quezon City from December 6 to 8. 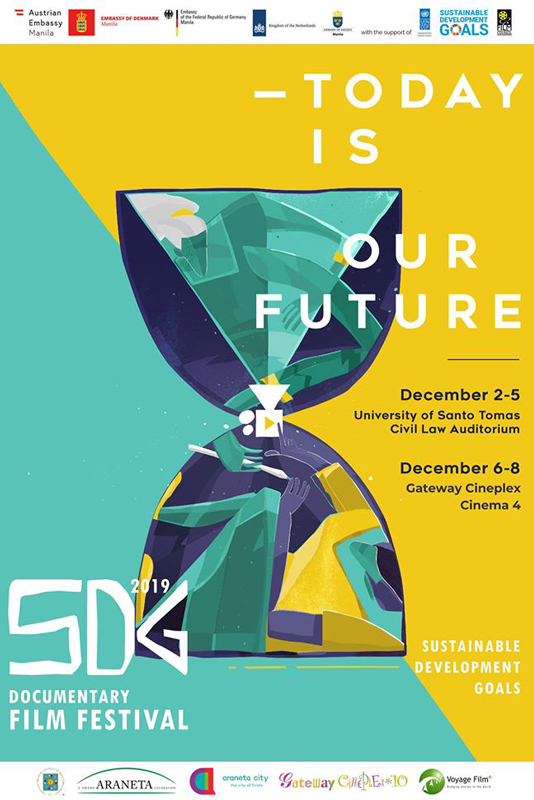 A first of its kind in Manila, the SDG Documentary Film Festival 2019 commemorates International Human Rights Day on December 10 by bringing awareness to sustainable development as a responsibility and a human right through a series of documentaries.

Here’s a quick summary of the films that will be presented at the film festival:

Directed by Werner Boote, The Green Lie highlights SDG 12 (Responsible Consumption and Production). The documentary debunks the “dangerous” lie of big companies who tell the public that they can save the world by buying the “right stuff”.

This film by Andreas Dalsgaard puts focus on SDG 16 (Peace, Justice and Strong Institutions). The documentary film takes us to 2011 where radio host Obaidah Zytoon and her friends take the streets to join the protests against President Bashar al-Asaad.

The War Show captures the fate of Syria through the intimate view of a small circle of friends.

Directed by Alexander Hick, Thinking Like a Mountain follows the Arhuacos, guardians of the forest and the ice of Colombia’s highest mountain. This film puts a particular highlight on the collision of two cultures and the portrait of indigenous life in the present.

In this film by Arne Gielen and Gert Jan Hulster, SDG 11 (Sustainable Cities and Communities) takes the stage in a story that puts focus on cycling and how it is a part of the lives of the Dutch.

Why We Cycle documentary takes audiences on a ride with ordinary cyclists and specialists as they uncover how cycling affects people, societies, and the organization of cities.

This film by Viktor Nordenskiöld highlights SDG 5 (Gender Equality) in coverage of Margot Wallström’s four years in office as the Swedish foreign minister. Wallström is particularly known for her fearless feminist agenda and her sharp mind.

The Feminister allows viewers to witness Wallström’s negotiations with countries such as Saudi Arabia and North Korea, as well as a competitive campaign for a seat in the UNSC.

The film focuses on five Filipinas working in Hong Kong as domestic helpers as they get the chance to participate in an extraordinary beauty pageant that allows them to gleefully reclaim their dignity.

To help you schedule your visit to the film festival, here’s a rundown of the film screening schedules for all days of the festival.

Admission to this unique film festival is free.

For more information, you may visit the film festival’s official event page and the official Facebook page of the Austrian Embassy in Manila.

What: Today is Our Future: The First SDG Documentary Film Festival
Where:

When: December 2 to 5, 2019, and December 6 to 8, 2019
Ticket Information: Admission is free.
Facebook: facebook.com/AustrianEmbassyManila