The Philippine Philharmonic Orchestra (PPO) will be staging their third concert under Gold: Classical Musical Treasures on November 15, 2019 at the CCP Main Theater, Pasay City. It is the PPO’s 37th Concert Season.

For this concert, the orchestra will be under the baton of Yoshikazu Fukumura, PPO’s music director and principal conductor and will feature Japan’s SORA Ensemble. 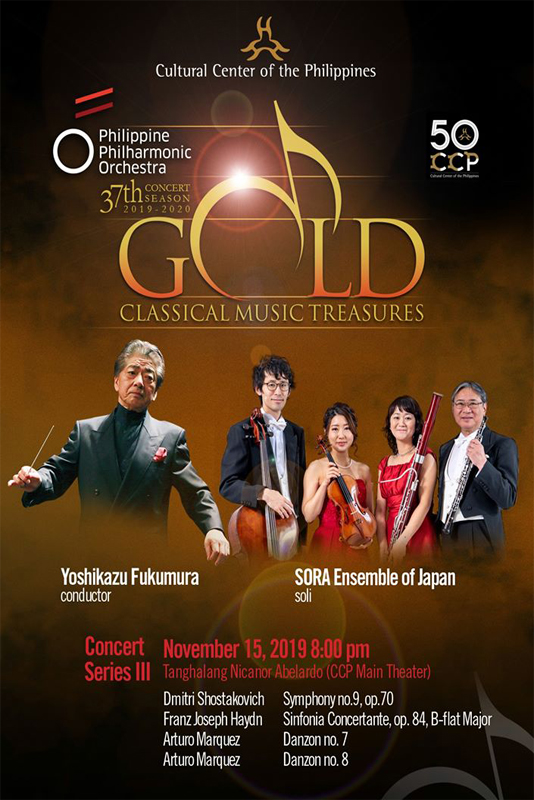 The SORA Ensemble is composed of Hiromasa Iwasaki (Oboe), Rei Ishiguro (Bassoon), Kana Kobagashi (Violin), and Keiichi Yamada (Cello). SORA boasts over a hundred concerts in cities, towns, and villages in Hokkaido and in other parts of Japan, performing chamber music, symphony, and other ensemble music.

In 2018, they released their first album titled “SORA with Hokkaido” in commemoration of the group’s 10th anniversary.

Included in the program of the concert are classics from famous composers such as Dmitri Shostakovich, Franz Joseph Haydn, and Arturo Marquez. You can also expect works like Symphony no.9 op.70, Sinfonia Concertante op. 84 in B-flat Major and the Danzon no.7 to be performed in this night of musical mastery.

Tickets start at Php 500 and are available at the CCP Box Office.

For more information, you may visit the Philippine Philharmonic Orchestra’s official Facebook page. For ticket inquiries, you may contact CCP Box Office at 02-832-3704 or 02-832-3706.