Catch one of the country’s premier theater actresses Lea Salonga in a two-night concert titled Perfect Ten on August 30 and 31, 2019 at the Newport Performing Arts Theater, Resorts World Manila.

The concert is in celebration of Resort World Manila’s 10th anniversary, hence the title, Perfect Ten. 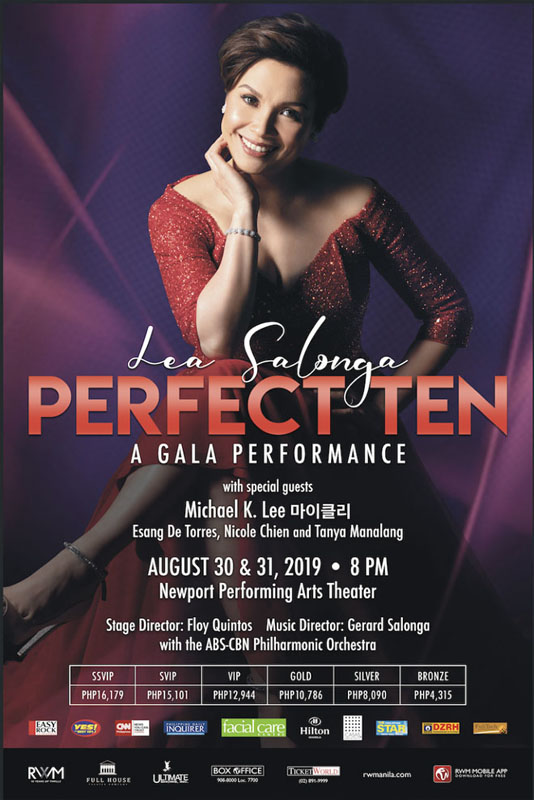 Joining her on stage is her daughter Nicole Chien and The Voice Kids Philippines runner up Esang de Torres. Attendees may also expect Tanya Manalang, her fellow Miss Saigon actress, and Michael K. Lee, who starred with her in the broadway masterpiece Allegiance.

Lea Salonga began her illustrious theater career in 1980 in the musical Annie, where she played the titular lead character. She later originated the role of Kim in Miss Saigon for both the West End and Broadway productions.

Aside from being the first Asian woman to win a Tony Award, Salonga also won the Olivier and Theatre World Awards for her role as Kim. Not to mention that she was the first Asian actress to play the roles of Eponine and Fantine in Les Miserables.

Salonga later provided the voices of Jasmine in Aladdin (1992) and Fa Mulan in Mulan (1998). In 2011, she was named a Disney Legend for her work with The Walt Disney Company.

This is truly a performance that you wouldn’t want to miss! Tickets are now available via TicketWorld and TicketWorld outlets nationwide.