The Chainsmokers Returns to Manila for their World War Joy Tour this August 15!

The Chainsmokers are coming back to Manila with their “World War Joy” Tour this August 15, 2019, at the Mall of Asia Arena, Pasay City. Aside from Manila, they’ll also be making stops at Tokyo, Osaka, Bangkok, Singapore, Hong Kong, Seoul, Taipei, and Shanghai. 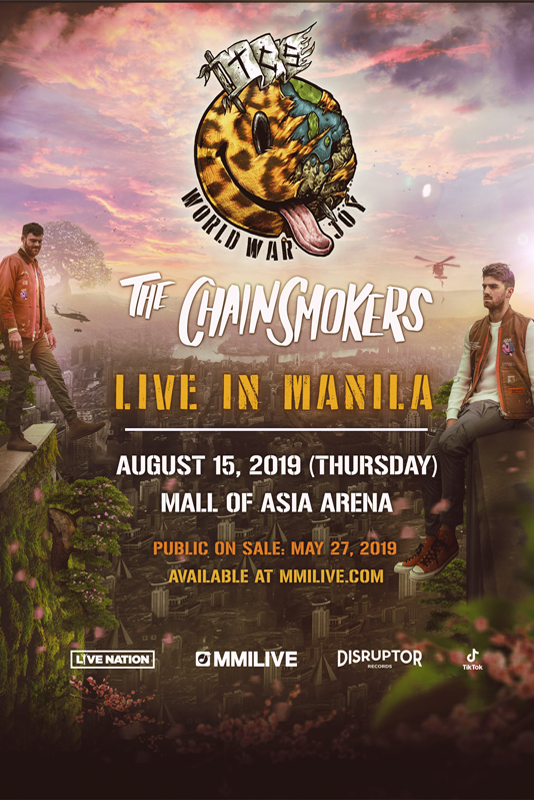 Their tour was first announced through the duo’s Twitter account which also included a list of the other cities that they’ll be visiting on the Asia leg of their “World War Joy” Tour. This is the duo’s third time in Manila, their first visit was in 2014 and again in 2017. While the date and venue for their tour have already been announced – ticket details will be announced on May 27, 2019, at MMILIVE’s website.

The Chainsmokers are an American DJ and production duo composed of Andrew “Drew” Taggart and Alexander “Alex” Pall. The duo debuted in 2012 and has released two studio albums, three EPs, 34 singles, 19 music videos, and 36 remixes. They’ve also been nominated and won a number of awards including “Best Dance Recording” in the 2017 Grammy Awards and “Choice Electronic/Dance Artist” at the 2018 Teen Choice Awards.

Catch The Chainsmokers’ World War Joy Tour in Manila this August 15, 2019, at the Mall of Asia Arena, Pasay City. Tickets will be available on May 27, 2019, at MMILIVE.

What: The Chainsmoker’s World War Joy Tour in Manila
Where: Mall of Asia Arena, Mall of Asia Complex, J.W. Diokno Blvd., Pasay City
When: August 15, 2019
Ticket Information: Tickets will be announced on May 27, 2019, at MMILIVE’s website
Website: mmilive.com/chainsmokers2019