The Maine Is Back in Manila This September 14

American rock band The Maine is back once again in Manila for their first solo show in the country in seven years.

Presented by Pulp Live World, the comeback tour, in support of their 7th studio album, You Are OK, is set to happen on Saturday, September 14, 2019, at the New Frontier Theater in Quezon City. 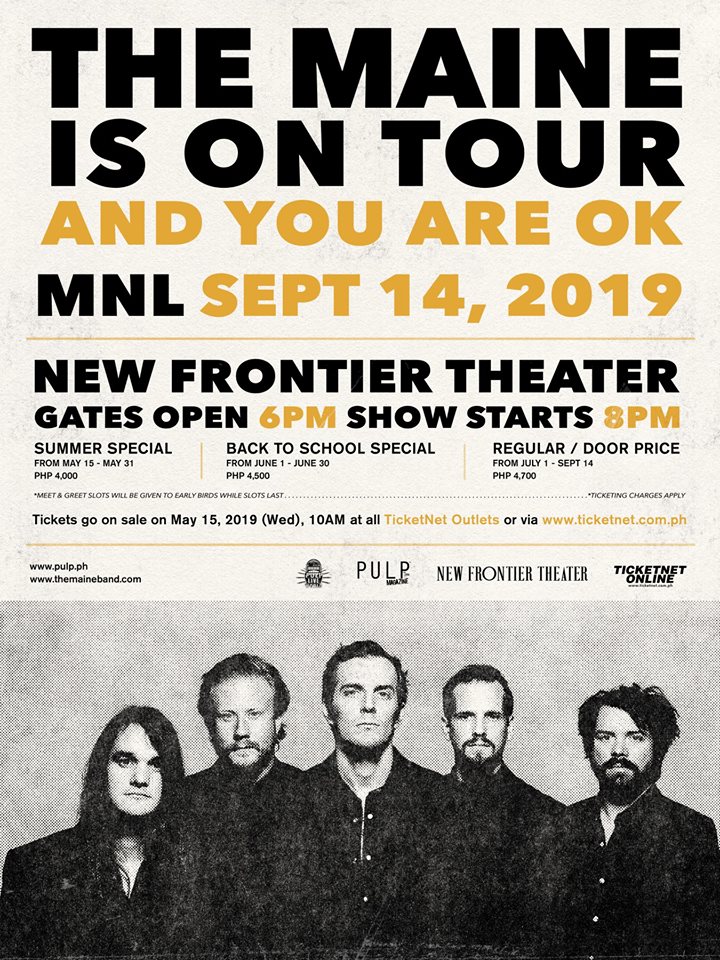 It was in 2014 when they brought their 8123 Tour to Manila, playing alongside This Century and Nick Santino. A year after, they came back and shared the stage with All Time Low.

It’s been an amazing day. The album is out everywhere and it is now yours. ❤️❤️ We hope the album can help you in some way or just be an escape at the very least. You Are Ok… but if you aren’t right now, you will be soon.

This year, following their memorable show in Manila during the Lovely Little Lonely era, The Maine are excited to play their Filipino fans new sounds from their best album yet. They are expected to play the tracks like “Numb Without You,” “Broken Parts,” and “My Best Habit.”

“This is us in our most ambitious form to date. This is us at breakneck speed. This is us in a television show starring Mandy Moore. This is us, for the first time, fully realizing a vision that we had from conception to finished product. All hype aside, this is us making music, putting everything into it, and holding our heads up higher than we ever have before,” vocalist John O’Callaghan said on their latest release.

You Are OK was released on March 29, 2019, and it was widely well received by local and global fans. It then has reached the top of the Billboard Independent Albums Chart—a momentous first for the Arizona’s crew.

Also read: Boyzone: Thank You and Goodnight Farewell Tour in Manila This June 23