Viva Europa 2019: A Celebration of the European Union

The European Union (EU) Delegation to the Philippines officially launched their annual cultural season Viva Europa last April 8, 2019. It celebrates the founding of EU, as well as strengthening and recognizing the friendship between EU and the Philippines. 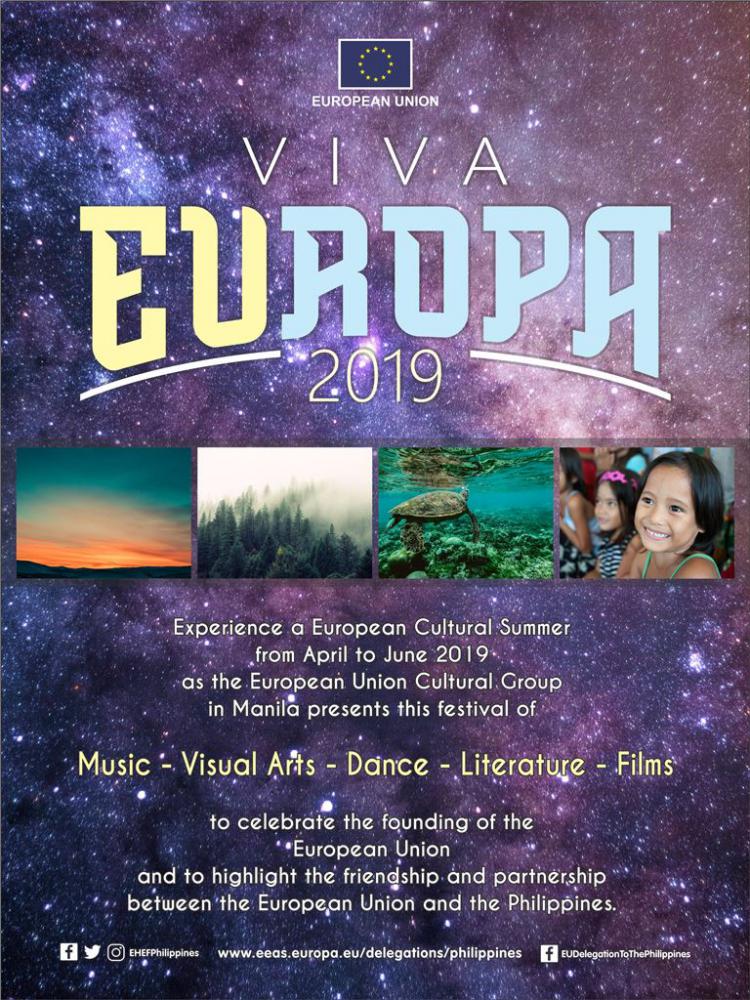 IMAGE EU Delegation to the Philippines

Viva Europa 2019 will run from April to June 2019 with its theme “Go Techno,” a follow-through of EU Delegation’s Copernicus Programme—a program that is integral to EU’s efforts to monitor the earth and its ecosystems.

This year’s events and activities will focus on promoting children’s rights, environmental protection, and music.

The annual nationwide choir competition Musica FEUropa, is happening on May 25 and 26 at the Far Eastern University. While the Euro-Pinoy Concert will be on May 7 at The Ruins in Poblacion in Makati City.

The concert will feature world-class talents from the countries of Czech Republic, Germany, Spain, and the Philippines.

More events and activities await including the stargazing activity and stars and constellations session organized with the Manila Astronomical Society on the third week of May.

As Viva Europa 2019 aims to focus highly on children and the youth, EU Delegation, together with Museo Pambata, the embassies of Austria, Czech Republic, Germany, Netherlands, and the Philippine-Italian Association, will be conducting various games and cultural activities to disadvantaged children, including giving them an opportunity to hear European stories.

On May 4, the Schuman Cup will be administered at Ayala, Alabang to teach children how to play football. There will also be a friendly game between EU diplomats and Filipino professional players. The one-day football festival aims to foster the EU-PH relationship through sports and camaraderie.

To further EU Delegation’s campaign to protect the environment, a bike tour in Bohol is set from May 6 to 7. It follows the successful tours done in the provinces of Palawan and Guimaras in the previous years. The bike tour also aims to raise awareness on living a sustainable lifestyle.

At the same time, the European Commission will also launch Velomai, which is the EU Institutions’ bike-to-work challenge. The campaign aims to not only highlight biking as a form of transportation but also in helping improve the environment’s air quality.

Viva Europa 2019 is spearheaded by the European Union (EU) Delegation to the Philippines, one of the 140 diplomatic missions representing EU worldwide. Its main goal is to promote and strengthen the relationship between EU and the Philippines.

For updates and more information about Viva Europa, visit EU Delegation to the Philippines’ official website and their official Facebook page at facebook.com/EUDelegationToThePhilippines.

Source: EU Delegation to the Philippines