One of the UK’s most talked about acts is coming back to Manila! New Hope Club is set to take the stage for their Love Again Tour on June 8, 2019, at the New Frontier Theater, Quezon City. 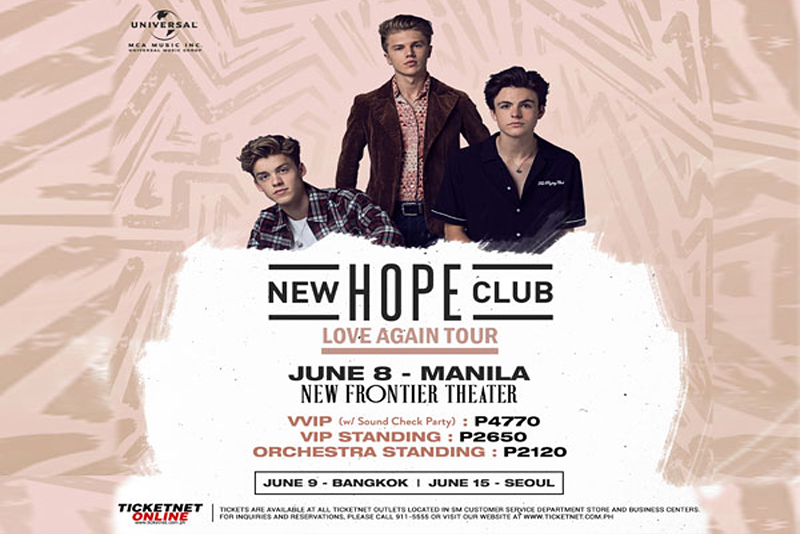 This is the band’s third time in the country after their concert back in 2018 and their one-night-only fan meet earlier this year. Their Love Again Tour will mark their first major concert series that will also make stops at Seoul, South Korea and Bangkok, Thailand before starting their UK Tour in September.

New Hope Club was formed in 2014 and had George Smith and Blake Richardson as the original members of the group before Reece Bibby joined the group in 2015. Their first recording was a cover of “Wake Up” by The Vamps who signed New Hope Club to their record label in the same year. During their debut in 2017, the band stayed on the Billboard Next Big Sound chart for 10 weeks after peaking at the #5 spot. They were also nominated in the 2017 Teen Choice Awards for “Choice of Next Big Thing”.

In 2018, the band had their first headline shows at London’s O2 Shepherd’s Bush Empire. In the same year, they released the music video for “Medicine” which is their fastest music video to reach a million views on Youtube. They also released their second EP, “Welcome to the Club Pt. 2” in October 2018. Their first headlining show and their first visit to Manila also happened in 2018 where they performed three shows.

Last February, the band released their new single “Permission” that peaked at the #1 spot on iTunes Philippines Singles Charts and has been in Philippine radio charts since the release.

Are you excited for New Hope Club’s Love Again Tour Live in Manila? Save the date, June 8, 2019, at the New Frontier Theater, Quezon City. Tickets are available at Ticketnet Online.

For more information, you may visit the New Hope Club’s official Facebook page. For ticketing inquiries, you may visit Ticketnet Online or call 02-911-5555.