UPDATE: Shows in Manila, Davao, and Baguio are canceled as announced through MButterfly Philippines Facebook Page 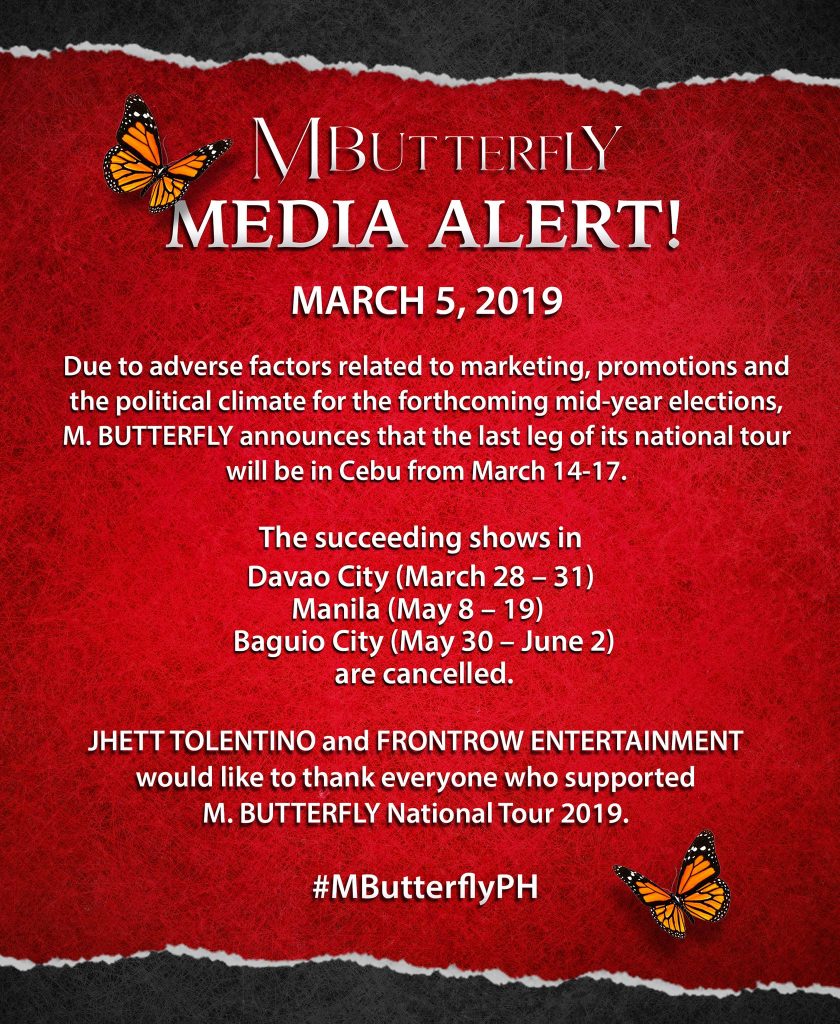 The multi-awarded play, M. Butterfly, which prompted last September for its National Tour stops by in Manila to perform from May 8 to 19 at the Maybank Performing Arts Theater in Bonifacio Global City!

The M. Butterfly National Tour 2019 is about to kick-off! Catch us on the following dates and locations:Iloilo on Feb 14-17Dumaguete on Feb 28-Mar 3Cebu on Mar 14-17Davao on Mar 28-31Manila on May 8-19Baguio on May 30-June 2.For more information, follow us on our social media pages @MBUTTERFLYPH on FB, IG, Twitter. Follow our hashtag #MButterflyPH

M. Butterfly’s narrative revolves around the twisted story of Rene Gallimard, a former French Embassy diplomat, who falls deeply in love with a Star Opera actor, Song Liling, who is unknowingly a man portraying a woman in the play. Meanwhile, Liling is also part of a Chinese Communist Party which broke a West and East espionage. 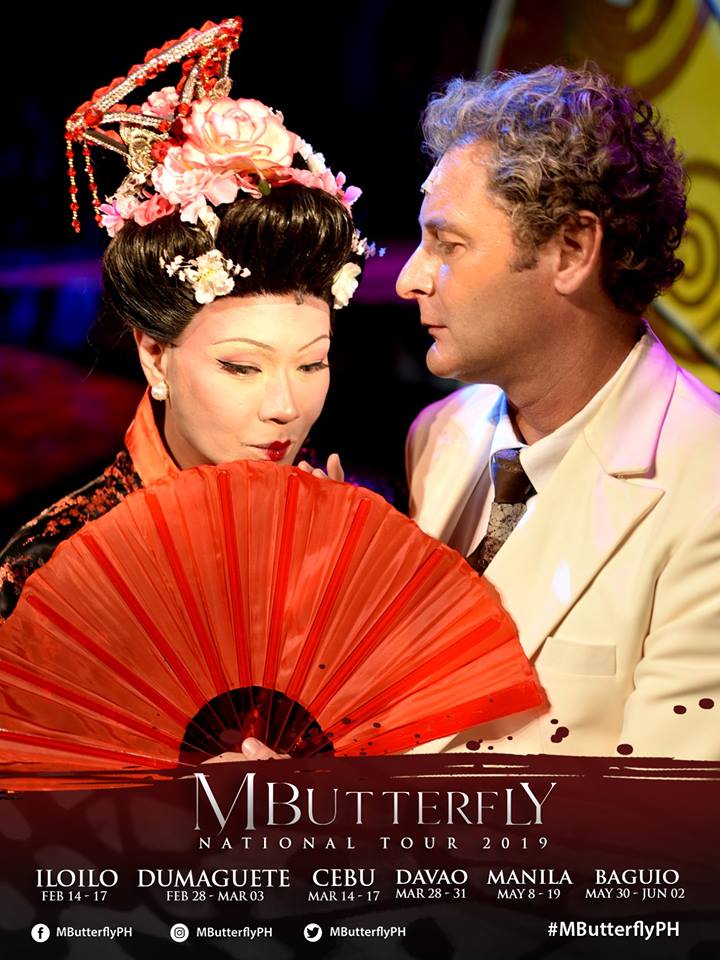 M. Butterfly premiered its debut at the National Theatre, Washington, D.C. on February 10, 1988, then later performed at the Eugene O’Neill Theatre on March 20, 1988. The play stopped its play after 777 performances accumulated on January 27, 1990.

M. Butterfly also copped the awards for the Best Play, Best Actor, and Best Director in the Aliw Awards 2018. 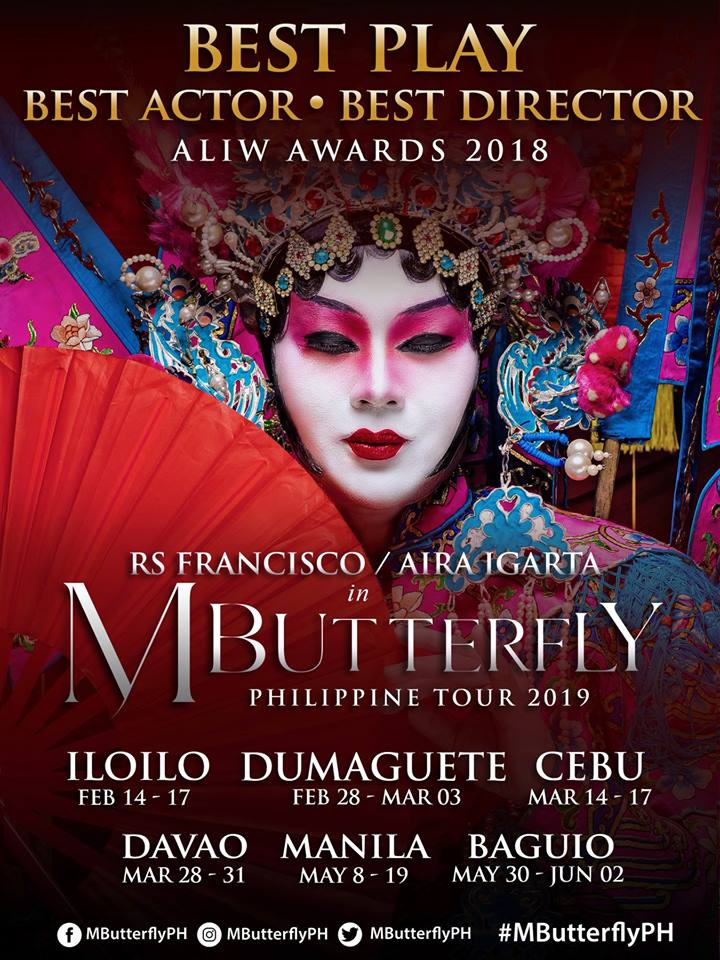 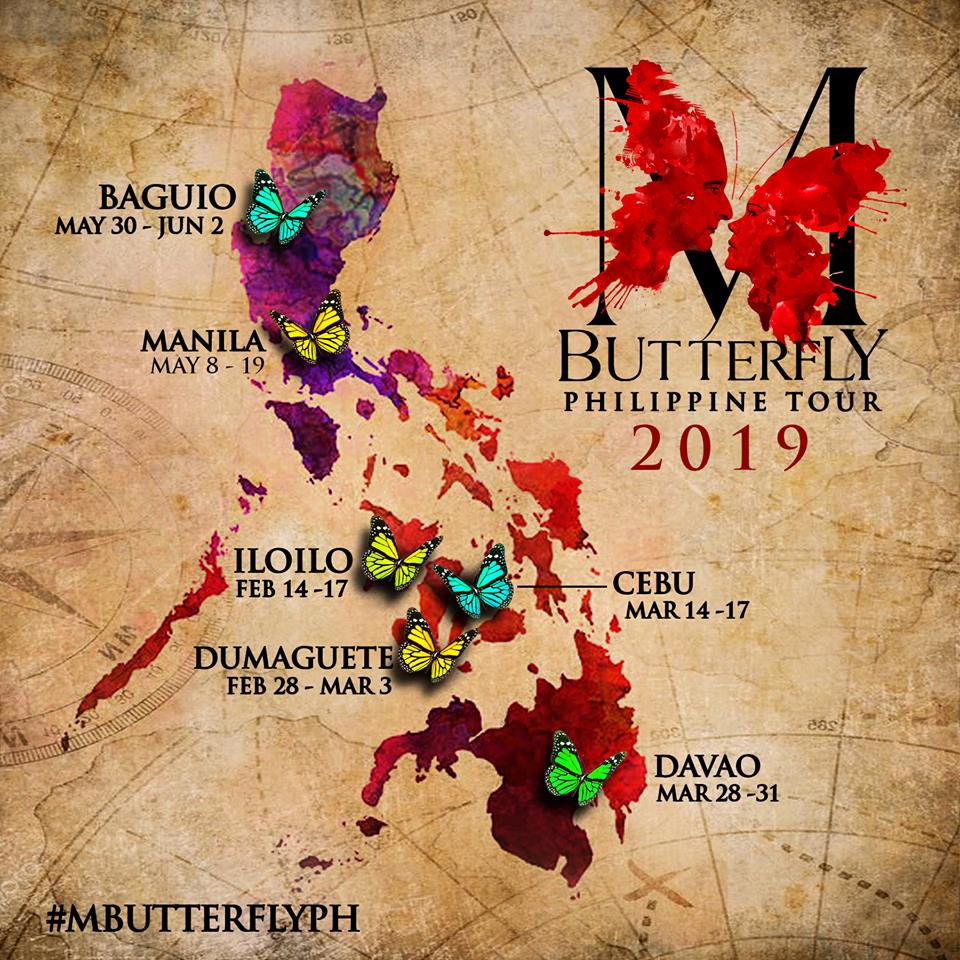 This amazing play is directed by Kanakan-Balintagos and is written by David Henry Hwang, a Tony award winner three-time nominee, and a two-time Nominated Finalist for the Pulitzer Prize in Drama, and a three-time Obie Award winner.

On February 28 to March 5, M. Butterfly will perform at Dumaguete, Luce Auditorium Siliman University. From March 14 to 17 at the SM City Seaside Centerstage, Cebu. On March 28 to 31 at the SM Lanang Premier Cinema 6, Davao, and May 30 to June 2, 2019, at the Saint Louis Unversity, Baguio.

This play is exclusively brought to you by Frontrow and Jhett Tolentino.

For ticket reservation and online purchasing please visit TicketWorld. You may also direct your inquiries via 02-891-9999.