Bianca Del Rio, known for her win on the 6th season of RuPaul’s Drag Race, is a self-proclaimed “clown in a gown”. She tells the audience about her world travels and her life, which she considers an outrageous circus.

Her show mainly consists of her comical “tell it like it is” views, covering life from politics and travel to family and social media. While everything seems to be for entertainment purposes only, there is an important lesson that can be learned from this comedy show—sometimes we all need to just lighten up! 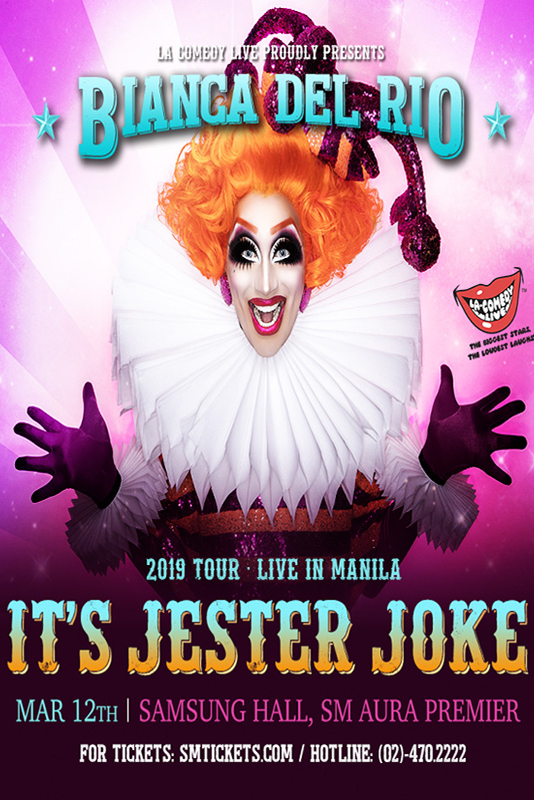 Bianca Del Rio is the alter ego of Roy Haylock, who is one of the most popular drag queens that took the world by storm. She was a front-runner on RuPaul’s Drag Race, winning the coveted Drag Race crown in May 2014. Bianca was a fan-favorite throughout and even after her appearance on the show.

Further, she’s the only contestant to never place in the bottom three in her season, but statistically, she’s also the best-performing queen overall. She is regarded by many to be the best winner of RuPaul’s Drag Race.

Bianca has over 1 million followers on Instagram and her shows, The Rolodex of Hate, Not Today Satan and Blame It On Bianca Del Rio, sold out to audiences around the world. She has also starred in two films since 2013.

What are you waiting for? Experience a night of laughs and roasts as Bianca Del Rio makes her debut in Manila on March 12, 2019 at Samsung Hall, SM Aura Premier, Taguig city! Tickets are available via SM Tickets.

For ticketing information, you may visit the SM Tickets website or call them at 02-470-2222 or visit any SM Tickets outlet.