Postmodern Jukebox in Manila this September

September 10 Update: The concert has been canceled. For tickets purchased at the Ticketnet Box Office and Outlets, refunds will be made at the Ticketnet Office located at the Yellow Gate of the Smart Araneta Coliseum. Box office is open daily from 10 am to 8 pm and tickets must be surrendered upon claiming of refund. Please bring a valid ID for reference. Deadline for processing the refund request is until September 30, 2018 – 5 pm. For tickets purchased online at www.ticketnet.com.ph, the amount will automatically revert to the credit card used at the time of purchase.

Reimagine modern hit songs played in the style of the ’60s or even the ’50s. Can’t do it? Better listen to it. Instead of doing covers, Postmodern Jukebox (PMJ) takes modern pop hits and plays them in ragtime, vintage jazz, and other retro musical styles. Their concert on September 14, 2018 at the Kia Theatre will take you back in the old days in a modern way.

Scott Bradlee, music arranger and pianist and his ensemble band of throwback minstrels, PMJ, reimagines contemporary pop, rock, and R&B hits in the style of various yesteryears, from swing to doo-wop, ragtime to Motown—or, as Bradlee himself puts it, “pop music in a time machine.”

PostModern Jukebox’s big break came after doing a jazzy cover of Macklemore & Ryan Lewis’ ‘Thrift Shop’ which became viral, reaching over a million views in its first week and climbing to #8 on Billboard magazine’s Jazz Albums chart. Bradlee and crew then followed it up with Miley Cyrus’ ‘We Can’t Stop’ and true enough there was simply no stopping PMJ as it found its way out of Bradlee’s basement apartment and into bigger, more elaborate venues and mainstream consciousness. 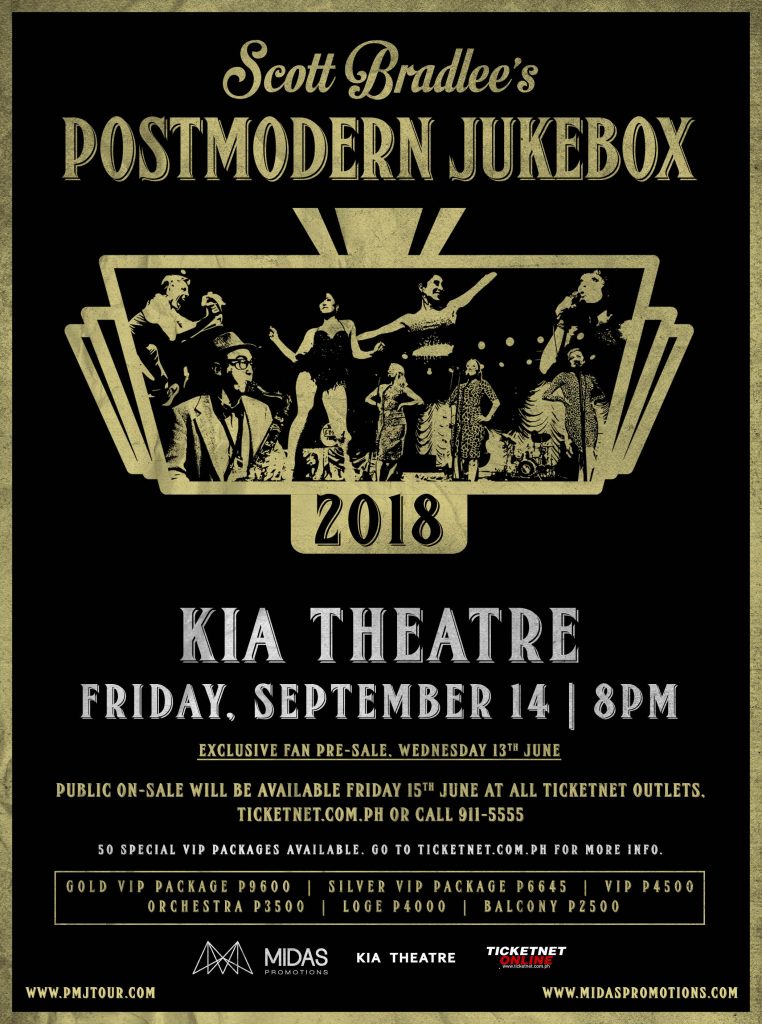 For inquiries, contact Midas Productions on daniel@midaspromotions.com or call 0917-829-5989.

As any Post Modern Jukebox fan can tell you, the experience is never the same twice: expect new songs, new sounds, and new members added to the ever-growing family each time around.