Behind every great piece is the desire to relay a thought that moves beyond words, or perhaps an emotion so sublime that the only way to express it must be to render it tangible.

Behind every great artist is a struggle. With the self. With those that surround them. Each piece is a reaction to the world, its rawness tamed, a not-so-secret, not-so-hidden message that the viewer must decipher.

Guided by these criteria, Salcedo Auctions is pleased to announce its selection of ‘Important Philippine Art’ including ‘Important Philippine Furniture, Tribal & Ethnographic Art,’ which will be going under the hammer on Saturday, March 10, 2 pm at Three Salcedo Place. Preview is ongoing daily, including Sunday and Monday, from 10 am to 6 pm. 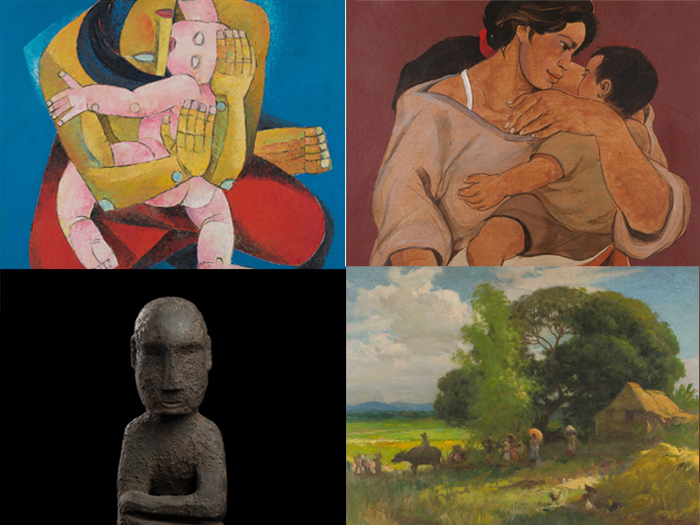 Consisting of over 100 lots, the pieces on offer present the full spectrum of Philippine artistry, showing the triumph of art over historical, social, political, and personal conditions: from the works of the academic and modern masters such as National Artists H.R. Ocampo, Jose Joya, Ang Kiukok, and BenCab, to leading contemporary artists Rodel Tapaya, Alfredo Esquillo, Mark Justiniani, and Ronald Ventura.

It also includes some of the finest Philippine furniture and antiquities, all meticulously vetted by the auction house’s specialists for their excellent workmanship and historical importance. The collection also includes a rare find: a letter written by Juan Luna from Mazas Prison, Paris during his incarceration for the shooting of his wife and mother-in-law, and one of the finest bul’uls to be offered at a public sale in recent memory, heavily encrusted with blood patina dating from the 19th century or earlier, and originating from Poitan, Eastern Banawe, Central Ifugao.

Among the sale highlights include: 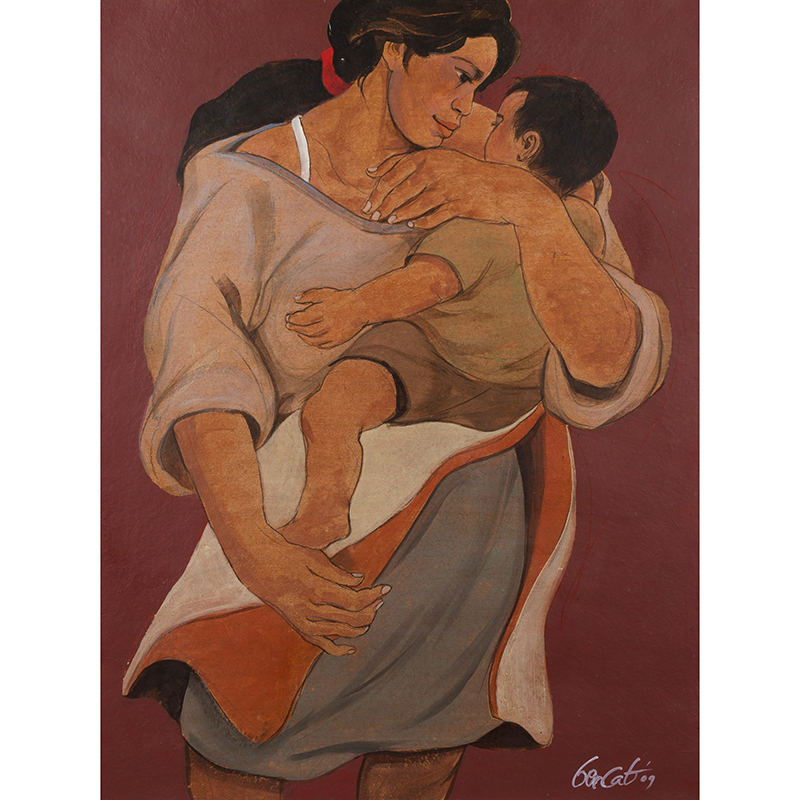 There are few things more precious than the bond between mother and child. BenCab translates this onto canvas, the two figures happy and content. The mother has eyes only for her baby; the child knows nothing but his mother’s embrace. The National Artist captures this most intimate of moments, the exclusivity of his subjects’ world amplified by the bare background, daring the viewer to intrude. 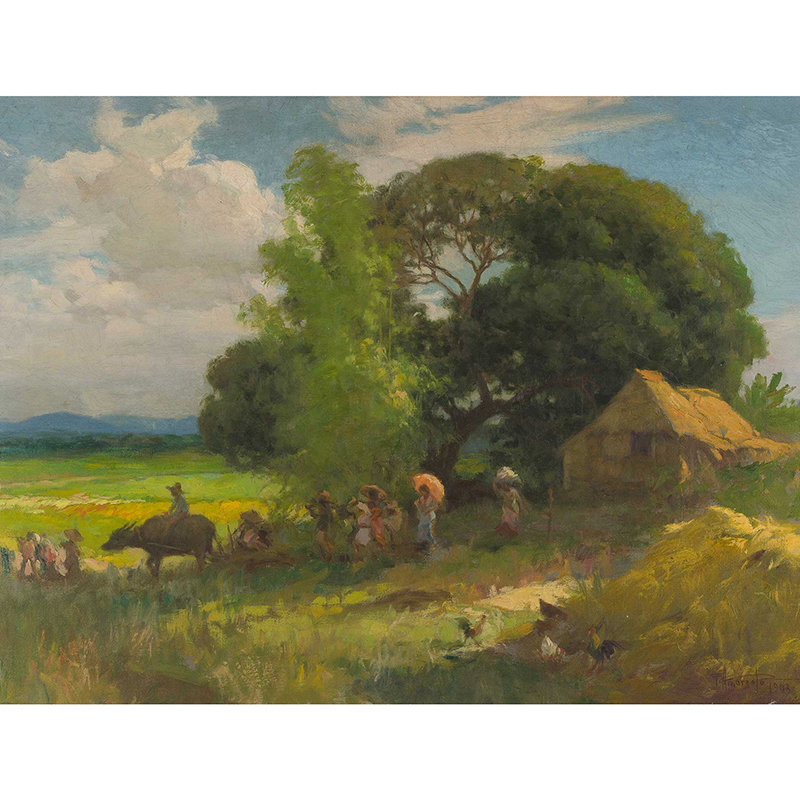 Underneath Fernando Amorsolo’s pastoral landscapes run a current of resistance. The National Artist turned away from the atrocities of World War II, choosing instead to paint an ideal–his ideal. He turns inwards, his mind’s eye conjuring the very opposite of what is happening around him: tranquility, resilience, routine, and hope. His paintings of the very Filipino is an act of defiance: against invaders, against uncertainty, and against the inevitability of change. 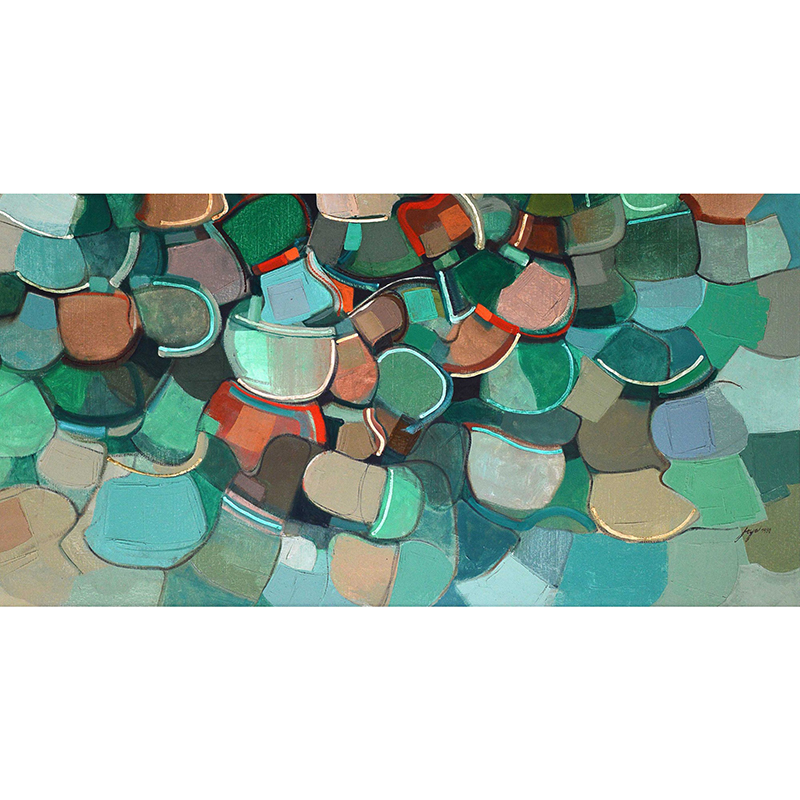 One of the largest paintings by Jose Joya still in private hands, Tagaytay Mist captures the ephemerality of a mountain breeze. The master of the Philippine abstract expressionist movement defies expectations uses a control and restraint not usually identified with the genre, his calligraphic brushstrokes emphasizing Filipinoness, marking him different from his contemporaries. Joya’s forms have a purpose, drawing the eye in a dance around the canvas, its rounded edges and careful application of color subverting the harshness associated with abstract expressionism while retaining, even intensifying its potency. 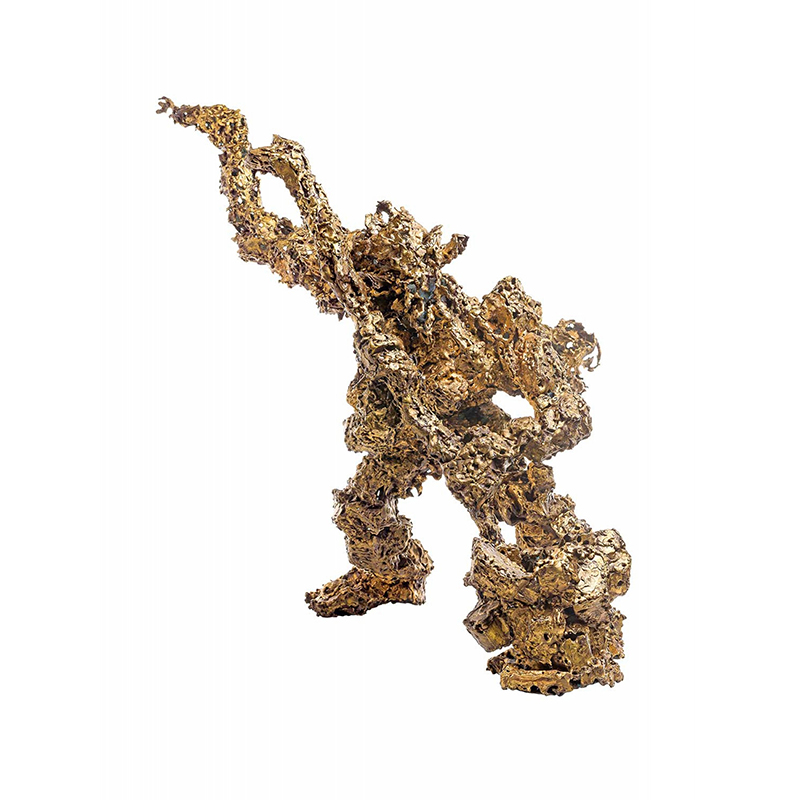 The tikbalang, like many creatures in Philippine folklore, deal with duality. With its man’s body and horse’s head, the tikbalang is said to be untamable. Solomon Saprid renders the creature in molten brass, capturing its strength and virility, at the same time giving testament to the blacksmith, whose art helps in the domestication of the tikbalang’s equine cousins. Saprid’s Tikbalang is forever caught in a world of contrasts: a man who is also a beast, an imaginary being rendered in hard metal, a statue on the verge, poised to strike. 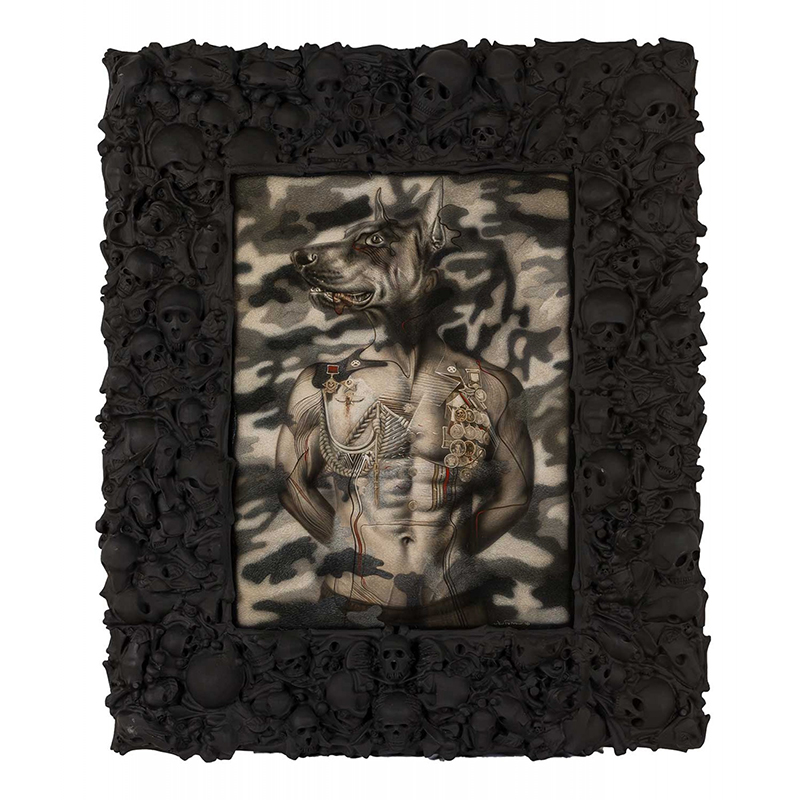 Ronald Ventura’s Camo touches on the price of war. The artist uses the detached human body to confront contemporary issues, his work infused with a multitude of layers, each contributing to form a cohesive whole. The piece first strikes the viewer as brazen, bold, and confident. A more introspective look uncovers carnage and consequence, the exchange of one’s humanity for personal glory at the expense of the anonymous. 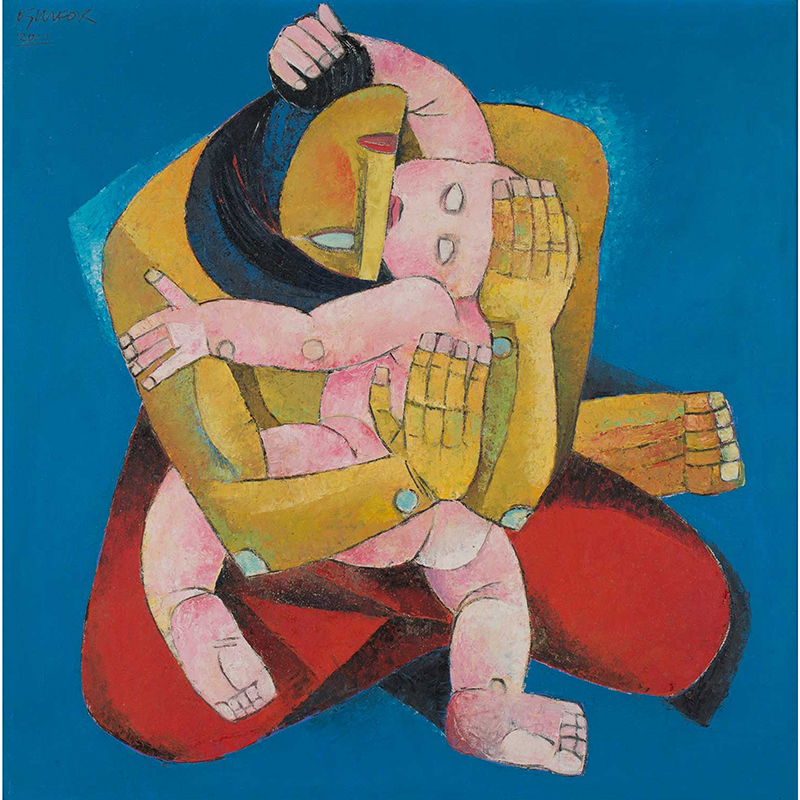 Ang Kiukok’s Mother and Child veers away from the more disquieting scenes that the National Artist is known for–starkly composed, vividly colored, angular still lifes that were a product of the artist’s beginnings as a poverty-stricken Chinese immigrant. But even Ang’s most universally loved piece suggests struggle, the capturing of this playful moment encompassing even the push and pull dynamic that is the destiny of every mother and child. 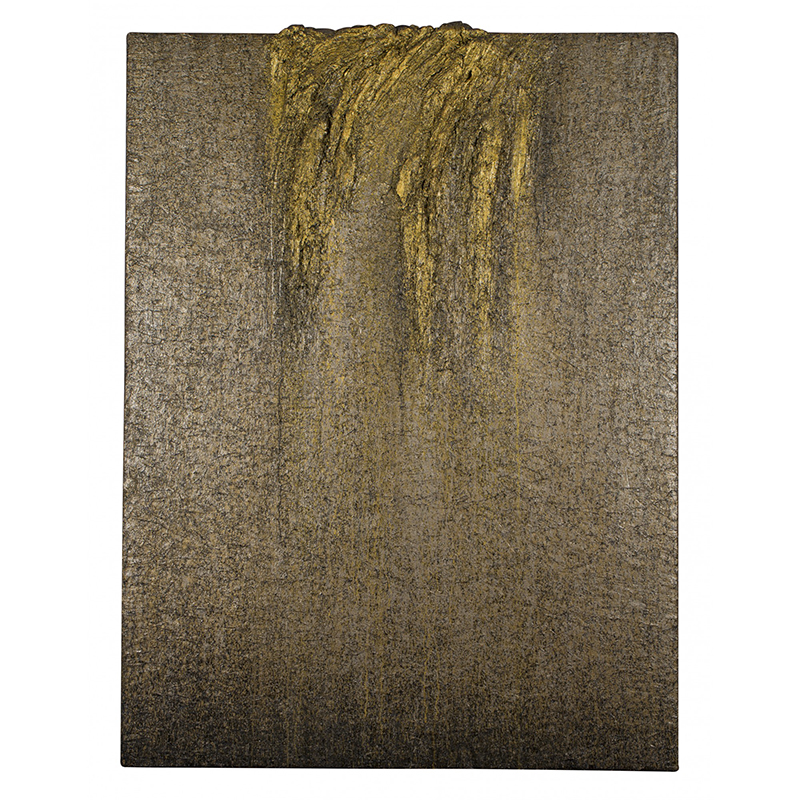 Lao Lianben’s Substance holds the viewer’s attention, a wash of gold that evokes the cascade of a waterfall even as it intimates of a figure that dares to escape from the confines of the canvas. The acrylic on canvas abstract invokes power and poise. Juxtaposed against a finely textured, white and copper dappled background, the piece calls forth both strength and reflection, allowing both to exist side by side without conflict, a reflection of the ebb and flow between the physical and the spiritual. 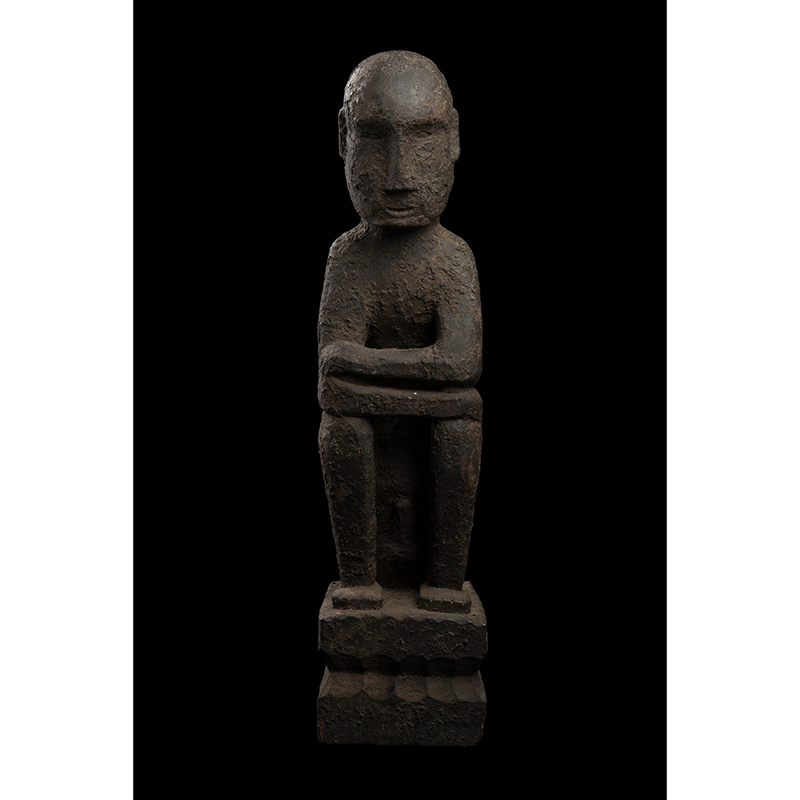 The bul’ol is a carved wooden figure that hails from the province of Ifugao. The statue of a simplified human form is thought to contain the spirit of a family’s ancestors and is venerated as a rice god. Usually kept in the granary, the bul’ol’s presence–sitting, waiting–impresses upon the viewer the statue’s role as a gentle but firm guardian, ready for action should the occasion demand. It harkens back to an older, darker Philippines, intimating secrets beyond the pastoral, an unassuming nexus of power that hails from our prehistoric past, surviving the onslaught of modernity.

Each of these pieces invites the viewer to create new meaning at every glance, the tensions within straining to escape the liminal, each one integral to the multifaceted, sometimes jagged vista. For inquiries, email info@salcedoauctions.com or phone 02-659-4094, 02-823-0956, or 0917-894-6550. Follow @salcedoauctions on Facebook and Instagram for updates regarding the auction.

This is a press release. Minor edits were made by Philippine Primer editors before publishing. 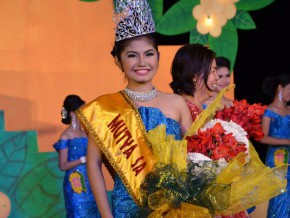 A bountiful harvest for their livelihood: Camiguin’s Lanzones Festival