In celebration of its 40th anniversary, the first ever Voltes V Run is set to be staged in Manila this year!

Voltes V Manila Run 2018 will be held at McKinley West, Bonifacio Global City on February 10, 2018. Registered runners will get an exclusive Voltes V-themed race shirt, race bib, drawstring bag, and a finisher’s medal at the end of the 5-km route that’s designed to immerse fans into the world of their favorite anime series.

Voltes V is a super robot anime series that first aired in the Philippines from May 1978 until April 1979. It gained such a strong following that it re-aired several times in 1986, 1999, 2005, and this year, allowing it to continuously gain more and more followers across several generations. 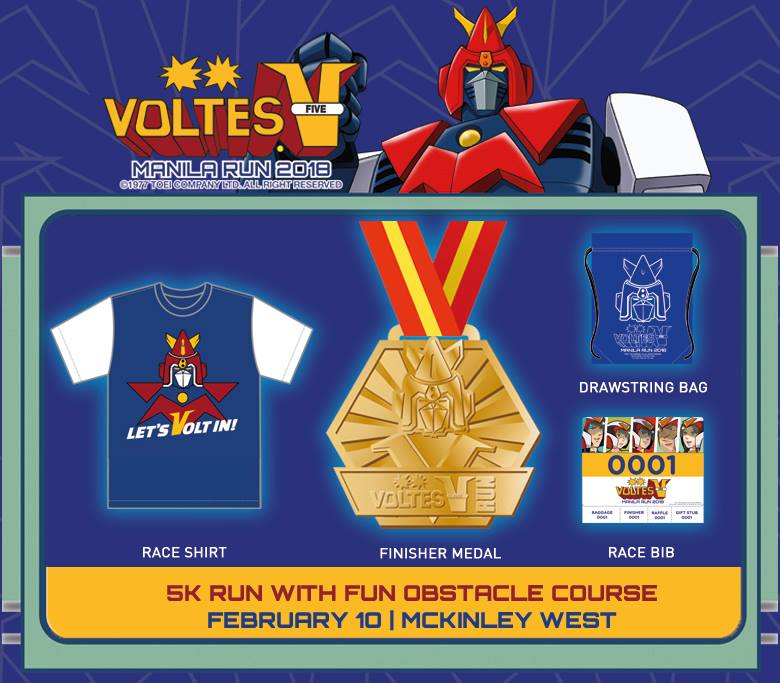 In fact, Voltes V is even more popular here in the Philippines than in Japan, with a record viewership of 58%! Aside from the running event, fans and participants can take part in special programs at the venue, including a performance from the original singer of the opening song “Voltes V no Uta,” Ms. Horie Mitsuko. A karaoke competition and special photo ops are also in the works.

So what are you waiting for? Sign up now with your family and friends for this momentous and historic Voltes V Run Manila 2018, and LET’s VOLT IN! Go to voltesvrunmanila.com to register.